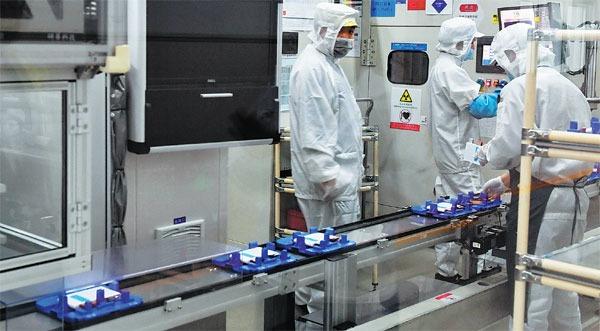 Ningde, located in East China's Fujian province, might appear to be like any of the hundreds of small, mundane cities across the country, famous only to the fishing industry and the few foodies who appreciate its marine specialty: the yellow croaker.

In fact, however, Ningde is quickly becoming famous throughout the automotive segment, thanks to the success of a local electric vehicle battery maker, which in only a few years has grown from an ordinary fish in the hatchery of China's new energy vehicle market into a veritable sperm whale.

Established in 2011, Contemporary Amperex Technology Co Ltd, or CATL, whose Chinese name literally means "the age of Ningde", has lived up to its name. By 2017, it had become the world's largest electric vehicle battery maker.

With batteries totaling 12 gigawatt-hours in the year, equivalent to 27 percent of the total produced in China, it dwarfed Japan's Panasonic and Warren Buffett-backed Chinese battery and electric car maker BYD.

According to statistics, CATL's batteries totaled 23.52 GWh in 2018, up 122 percent year-on-year and representing a 41 percent share of the Chinese market, with the closest followers far behind

The momentum continues. According to statistics from the GGII, a Chinese consulting firm, CATL's batteries totaled 23.52 GWh in 2018, up 122 percent year-on-year and representing a 41 percent share of the Chinese market, with the closest followers far behind.

ALSO READ: Battery maker to set up unit in Germany

So far it has spent billions of yuan to set up joint ventures with almost all major Chinese carmakers including Geely, SAIC and FAW, and the company's global customers now include BMW, Daimler and Volkswagen.

How CATL made it

Its fast rise to stardom is the result of a combination of numerous factors, including a bit of luck.

Its deal soon after its establishment in 2011 with BMW's Chinese joint venture BMW Brilliance, which was planning an indigenous electric car brand Zinoro, later proved to be a major landmark in its development.

As cars sporting Chinese batteries are qualified for subsidies from the government, it followed that a local supplier would be a better choice than international ones. But why an obscure one like CATL?

"That is because we had years of experiences as a high-end lithiumion battery maker, at ATL," Huang Shilin, vice-chairman of CATL, told Tencent. ATL, which was founded in 1999 by Zeng Yuqun and later sold to Japan's TDK, had been specializing in lithiumion batteries for consumer electronics, including the iPhone.

He took ATL out of TDK and turned it into CATL in his home city in 2011. It turned out to be a good guess.

China surpassed the United States as the largest market for such vehicles in 2015, and last year, more than 1.2 million were sold, with the figure expected to reach 1.6 million in 2019.

Yale Zhang, managing director of Shanghai-based consulting firm Automotive Foresight, said a more important reason for BMW's choice might be associated with BYD, which was then the country's largest battery and electric car maker.

BYD, Zhang said, "was reluctant to sell batteries so as to keep its own position in the industry," thus forcing BMW Brilliance and other carmakers to look elsewhere.

As soon as the two inked their deal, BMW Brilliance sent engineers to work with the CATL team on batteries it needed and thus helped the battery maker improve its technical procedures and raise its quality standards.

Both were happy with the results of their cooperation. CATL has made it into the list of suppliers allowed to provide batteries to BMW-branded models, and BMW's reputation in the industry has helped lift CATL out of obscurity and into stardom.

From then on, a number of major Chinese carmakers have rushed to sign deals with CATL, and its name is frequently mentioned when electric cars are unveiled as proof of good quality.

ALSO READ: Powering up to take battery industry by storm

"Smaller carmakers usually turn to other battery providers, because they have to wait in line if they want batteries from CATL," said a Chinese auto executive who asked to remain anonymous.

CATL's empire now seems insurmountable, as it's already the largest electric vehicle battery maker in the world and it has such a powerful set of alliances with carmakers.

However, a set of figures the battery giant released late last month revealed that its 2018 profit fell 7.71 percent to 3.58 billion yuan, the first time in years, despite a 48 percent rise in its operating income.

Analysts said increasingly fierce competition will put extra pressure on CATL as the government stops providing subsidies on Chinese companies by the end of 2020, which may mark the start of international battery makers' onslaught for a larger market share in China.

As soon as there are new and reasonable choices, it may be inevitable that some of CATL's customers will do business with other battery makers, if only to prevent putting all their eggs in one basket, they added.

Zeng, who is also chairman of CATL, already appears worried about securing a future without the help of the favorable government policy.

Last year, he sent an internal email to motivate his employees. The title of his letter posed a question: "When the typhoon comes, can pigs really fly?"

Zeng proceeded to use an allegory to caution workers against complacency.

"What happened to the pig after the typhoon is gone?" he wrote, according to the company's WeChat account. The pig is the company, the strong winds are government subsidies, and the danger is that favorable policies won't always be there to provide an uplift.

Chinese battery makers are revving up their counterattack. BYD is selling batteries to others and partnering with carmakers including Changan Auto to build battery joint ventures.

According to the Economic Observer newspaper, BYD is planning to expand its annual capacity to 60 GWh by 2020, as opposed to 54 GWh by CATL.

Analysts said CATL's lead will continue for a while to come, but it's clear that the company will face more pressure than before.

Zeng does not seem obsessed with the championship. In an interview with the Shanghai Security News last week, he said the race is like a marathon and CATL is just in the lead for the time being.

As the company will try to consolidate its position in China, it will explore opportunities to tap into overseas markets as well.

"In the next move, we will go global further and deepen our cooperation with carmakers in Europe, the United States and Japan," Zeng said.

According to Reuters, CATL will build its first European battery cell factory in Erfurt, Germany, starting production in 2021, and scale up its annual production to reach 60 GWh from 2026.

CATL is also a shareholder of Finnish company Valmet, which is planning to build a battery plant in Finland this year.