By He Shusi & China Daily 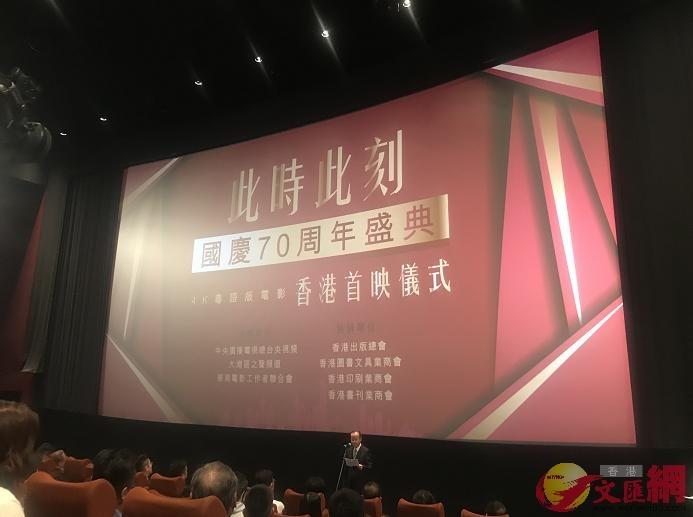 Yang Jian, deputy director of the Liaison Office of the Central People's Government in the HKSAR, delivers a speech at the debut of the documentary in Hong Kong, Oct 9, 2019. (PHOTO / PROVIDED TO CHINA DAILY)

HONG KONG - Hong Kong resident could re-experience the grand celebration of the 70th National Day through the big screen as a 4K-resolution Cantonese-dubbed documentary premiered in the city on Wednesday.

The movie made its Hong Kong debut at Premiere Elements theatre in Tsim Sha Tsui, attracting some 200 viewers.

The 98-minute film documented the grand military parade and public parade at the Tian'anmen Square in Beijing on Oct 1 in celebration of the 70th anniversary of the founding of the People's Republic of China.

It was jointly produced by the China Media Group and the South China Film Industry Workers Union.

It will be screened in 13 cinemas across Hong Kong, including those under Broadway, MCL and Emperor.

Attending the premiere were Yang Jian, deputy director of the Liaison Office of the Central People's Government in the HKSAR, Peter Lam Kin-ngok, a Hong Kong member of the Standing Committee of the Chinese People's Political Consultative Conference National Committee, and other representatives from the SAR government, media groups and local political parties.