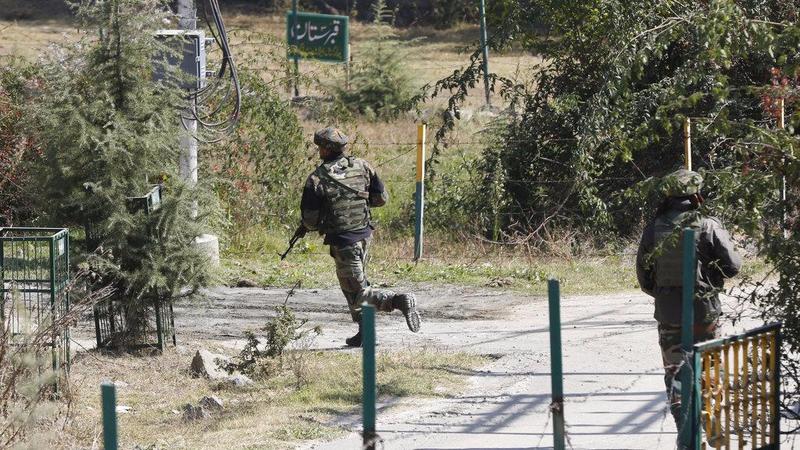 Indian army soldiers arrive at the scene after a paramilitary camp was stormed by suspected rebels on the outskirts of Srinagar, Indian-controlled Kashmir, Oct 3, 2017. (MUKHTAR KHAN / AP)

Around 30 others are reported to be wounded in the attack.

The car bombing was carried out at 3:15 pm local time on a national highway near Lethpora village in Pulwama district, about 27 km south of Srinagar city, the summer capital of Indian-controlled Kashmir.

"A vehicle heavily laden with explosives today targeted a CRPF convoy by ramming into it and blowing itself here at Lethpora," a police official posted in Pulwama told Xinhua. "The blast hit the convoy and damaged a CRPF bus completely, besides damaging other vehicles, killing 30 CRPF men and wounding around 30 others."

Images from the spot showed blood spilled on road, body parts strewn, glass shreds from wind shields scattered along with baggage on road.

Officials said the convoy coming from Jammu had over 65 vehicles in it.

The Jaish-e-Mohammad (JeM) militant group has claimed responsibility for the attack, saying a fidayeen (suicide bomber) carried out a car bomb blast to target the convoy.

"A JeM spokesperson Muhammad Hassan in a statement said many forces vehicles were destroyed in the attack," a local newsgathering agency said. "The spokesperson identified the fidayeen as Aadil Ahmad alias Waqas Commando of Gundi Bagh, Pulwama."

Eyewitnesses said smoke was billowing from the mangled vehicle and people ran for cover following the blast.

Immediately after the attack contingents of police, paramilitary and fire tenders reached to the site to carry out rescue work.

"The wounded have been removed to army hospital," Inspector General of CRPF Zulfiqar Hassan told the media. "We are carrying out post-blast analysis at the spot."

Officials said the death toll was likely to rise.

"There is apprehension that the death toll may go up because of the critical condition of many among the wounded," a police official said.

Officials said Home Minister Rajnath Singh has cancelled his visit to Bihar and is scheduled to visit the region on Friday.

This is the deadliest attack after 2016, when four heavily armed militants stormed an army brigade headquarters in Uri of Baramulla district, west of Srinagar, killing 19 troopers

This is the deadliest attack after 2016, when four heavily armed militants stormed an army brigade headquarters in Uri of Baramulla district, west of Srinagar, killing 19 troopers.

"Attack on CRPF personnel in Pulwama is despicable. I strongly condemn this dastardly attack. The sacrifices of our brave security personnel shall not go in vain. The entire nation stands shoulder to shoulder with the families of the brave martyrs. May the injured recover quickly," Modi tweeted.

Militant groups opposing New Delhi's rule are engaged in a guerrilla war with Indian troops in the region since 1989. Gunfight between the two sides takes place intermittently.

Kashmir, the Himalayan region divided between India and Pakistan, is claimed by both in full. Since their independence from Britain, the two countries have fought three wars, two exclusively over Kashmir.