Taliban attack on US military base kills two, injures dozens 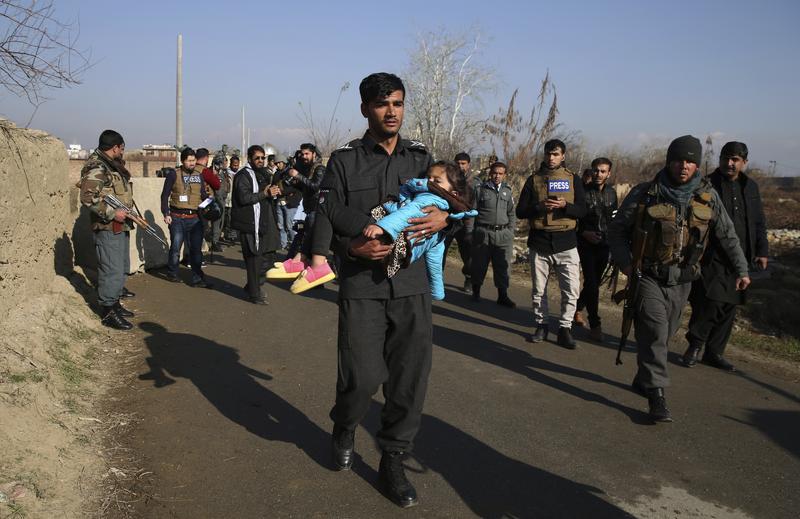 An Afghan Security police carries his injured daughter after an attack near the Bagram Air Base In Parwan province of Kabul, Afghanistan, Dec 11, 2019. (RAHMAT GUL / AP)

KABUL — Suicide bombers struck the main US military base in Afghanistan on Wednesday, killing two people and injuring scores in a major attack that could scupper plans to revive peace talks between the United States and the Taliban.

Two attackers detonated vehicles laden with explosives at the southern entrance to Bagram air base, while five more opened fire

The Taliban claimed responsibility for the attack, which struck the Bagram air base north of Kabul.

“First, a heavy-duty Mazda vehicle struck the wall of the American base,” said Zabihullah Mujahid, a Taliban spokesman. “Later several mujahideen equipped with light and heavy weapons were able to attack the American occupiers.”

The US-led military coalition said the attack was “quickly contained and repelled.” Taliban fighters who unsuccessfully tried to breach the airfield were killed in a series of airstrikes, the Resolute Support mission said in a statement.

Two civilians were killed and more than 70 injured during the attack, the Ministry of the Interior said.

Five servicemen from the former Soviet republic of Georgia, which is part of the coalition, were among those injured, the country’s defense ministry said in a statement. The majority of casualties were Afghan.

US Secretary of State Mike Pompeo, speaking at a news conference, condemned the attack that he said wounded at least five coalition troops.

“A 30-minute clash also happened between the attackers, who obviously wanted to enter the base, and foreign forces,” said Wahida Shahkar, a spokeswoman for the governor of Parwan province, which includes the Bagram district.

Two attackers detonated vehicles laden with explosives at the southern entrance to the base, while five more opened fire. Some of the fighters barricaded themselves inside a medical facility they had attacked, the coalition of foreign forces in Afghanistan said in a statement.

US President Donald Trump called off talks with the Taliban in September after an attack by the group killed an American soldier. The Taliban controls more territory than at any point since being ousted from power by Afghan foes with US air support in 2001.