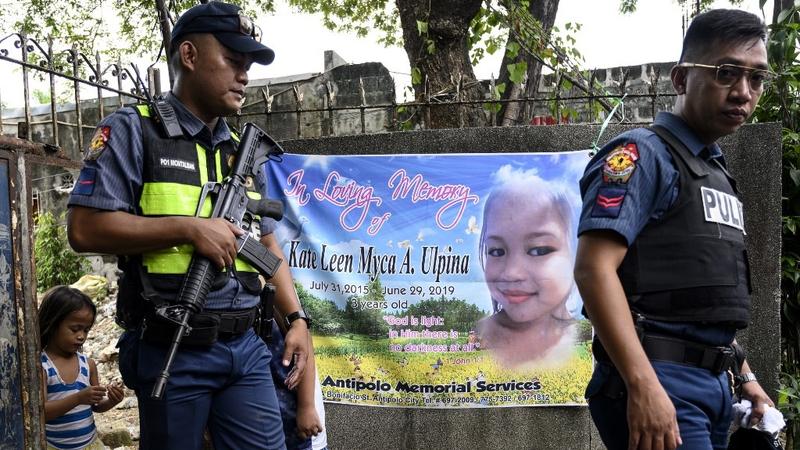 Policemen walk past a banner during the wake for 3-year-old Kateleen Myca Ulpina, killed during a sting operation conducted by the police, in Rodriguez, Rizal, east of Manila on July 7, 2019. A Philippine senator who initially led President Rodrigo Duterte's deadly drug war sparked outrage when he dismissed the killing of a toddler in a police anti-narcotics operation with an expletive and as collateral damage. (NOEL CELIS / AFP)

RODRIGUEZ, Philippines - One by one, a mother and her children splash holy water over a white coffin barely a metre long. On the dirt floor beneath it lies a pair of tiny pink slippers.

Ulpina was what police called "collateral damage", an unintended death among some 6,600 people whom police say they have killed in shootouts

This is a pauper's funeral mass in the Philippines for 3-year-old Myca Ulpina, one of the most recent - and the youngest known - victims of a war on drugs that has become so deadly and murky it is almost impossible to track how many have been killed.

Ulpina was what police called "collateral damage", an unintended death among some 6,600 people whom police say they have killed in shootouts during President Rodrigo Duterte three-year crackdown.

Filipino activists say tens of thousands are being killed as police terrorise poor communities, using cursory drug "watch lists" to identify suspected users or dealers, and executing many of them under the guise of sting operations.

Police and the government reject that as lies and say those killed were armed and resisted arrest, including the toddler's father, Renato, whom they said used his daughter as a human shield in a June 29 incident in Rizal province, near Manila.

"I can't count how many masses I've held for victims of the war on drugs, but one thing I've discovered is none of them fought back," priest Flavie Villanueva said at the mass on Tuesday.

"Sorry Myca, for I wasn't able to protect you ... Sorry that you were born at a time when the poor are targeted and killings are rampant. Sorry if they're saying you're collateral damage."

The service was held outside a relative's home under a small tarpaulin roof propped up by bamboo poles, with just three rows of five plastic chairs separated by an aisle of trodden earth. 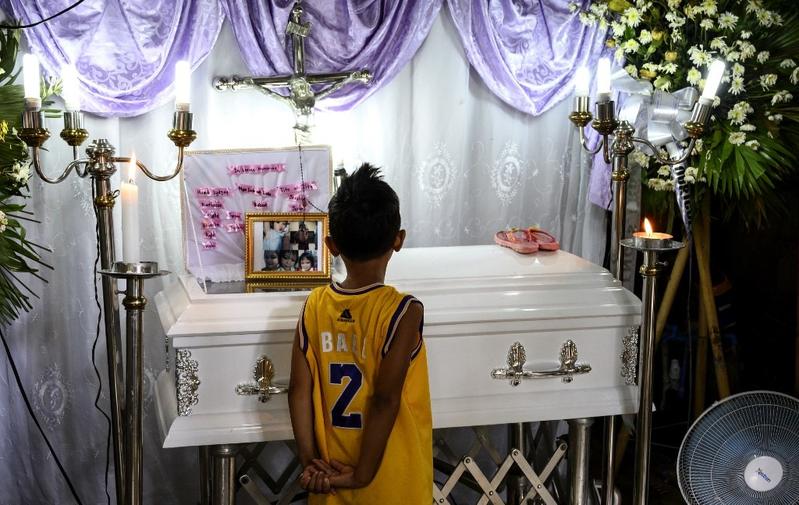 The half brother of 3-year-old Kateleen Myca Ulpina, killed during a sting operation conducted by the police, looks at her coffin in Rodriguez, Rizal, east of Manila on July 7, 2019. (NOEL CELIS / AFP)

About 60 people crammed into the space, mostly standing, among them activists, family and friends wearing T-shirts that said "Justice for Myca", and "stop the attacks against the poor".

In a yard outside strewn with trash, old clothes and broken furniture, a group of police carrying assault rifles stood guard.

Ulpina's killing comes as the 47-member United Nations Human Rights Council prepares to vote this week on a resolution that calls for a UN investigation into the drugs war, heeding pleas from activists and lawyers for the international community to intervene to stop the bloodshed.

The Philippines has dismissed the resolution as interference and cited Duterte's approval rating, which hit a record high last month, as evidence of resounding public backing for his anti-drugs campaign.

Foreign governments are being "misled by false news and untruthful narratives", according to Duterte's spokesman, while the Dangerous Drugs Board, the country's narcotics control body, on Tuesday said facts were being distorted "to present a morbid picture of the anti-drug campaign".

The child's death had generated little media attention until Friday, when Ronald dela Rosa, a senator and former top commander of Duterte's drug war, described the child's death as collateral damage, and said "shit happens". He has since apologised.

Accounts of what happened vary. Police said operatives had tried to buy drugs from Ulpina's father, who pulled a gun on them and killed one of their officers while using the child as shield.

Ulpina's mother, who has asked not to be identified by name, said police burst into her home without a warrant as her family slept. Her daughter was killed by a stray bullet and wasn't used as a shield, she said.

On Tuesday, scores of people joined a 3-km funeral procession behind a white hearse, the back of which had a picture of the child wearing a shirt with the word "Pulis" (police).

A priest and funeral workers carried the small casket up some steps and pushed it into a prepared space atop a concrete structure of hundreds of graves built in columns five-high.

"My daughter is not collateral damage," she said, as she left the cemetery.

Villanueva, a former drug user-turned-priest, said he welcomed calls for a UN investigation, because Duterte and the police were acting "like Gods".

"It's a new normal. That's why 'shit happens'" he said, referring to Dela Rosa's remarks. "My question is, when is enough, enough?"