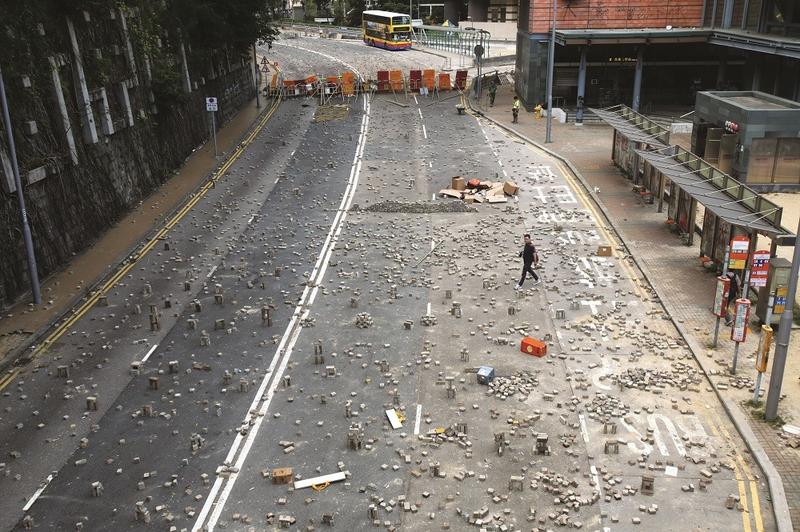 A road beside MTR and bus stations at the University of Hong Kong has been blocked with barricades and scattered bricks. The driver’s window of a bus stranded nearby is sprayed with paint. (PHOTO / CHINA DAILY)

A lawmaker who made headlines as a victim of recent street violence urged the Hong Kong government to curb the spiraling disinformation that has helped ferment the anti-government riots.

The government can enact an anti-fake-news law by invoking the city’s emergency law, he said.

Speaking at the Legislative Council meeting on Thursday, Junius Ho Kwan-yiu — who was stabbed in the chest last week by a man pretending to be a supporter — said Chief Executive Carrie Lam Cheng Yuet-ngor should utilize her power under the Emergency Regulations Ordinance to stop fake news, as well as deter “fake reporters” who have repeatedly impeded police action.

Ho has faced unfounded accusations that he orchestrated the attack on himself for political gain.

Singapore’s Protection from Online Falsehoods and Manipulation Bill, which came into effect last month, bans the circulation of what the government perceives as false statements against the public interest. Anyone who runs afoul of the law faces possible imprisonment of 10 years.

According to the Hong Kong emergency law, the chief executive may censor and control publications, writings, photographs, communications whenever she considers the city in a state of emergency or in public danger.

An anti-fake-news law will also be applied to news websites, social media groups and private chat groups that have become the “control center” of the protracted anti-government protests, according to Hong Kong’s legal experts.

Solicitor Kennedy Wong Ying-ho welcomed Ho’s appeal, saying it is “very necessary” to regulate social media, which is inundated with rumors and fake news that have been fueling distrust and hatred.

Willy Fu Kin-chi, secretary-general of the Hong Kong Legal Exchange Foundation, supports this proposal because the law will help “considerably” crack down on online disinformation.

Last week, Hong Kong authorities shut down a social media channel used by Hong Kong protesters to post personal details of police officers and their families after an injunction was granted.