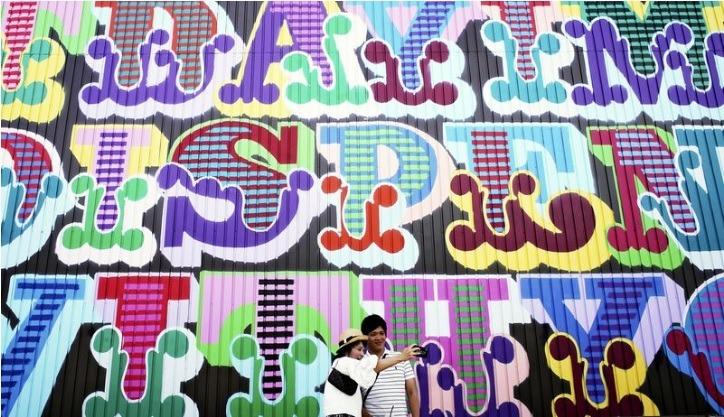 In this undated photo, a pair takes a selfie in front of British artist Ben Eine's colorful work, which is painted on the outside wall of a former iron factory in Osaka. (PHOTO / THE JAPAN NEWS)

OSAKA - An old shipbuilding district of Osaka has become a hotspot of sorts for a certain subculture known as “kabejo” — young women who love wall art. These women enjoying snapping selfies in front of huge works of art painted across entire walls, and then uploading their pop-art enhanced selves to social media sites.

I decided to visit this holy site for “kabejo” — located in the Kitakagaya district in Suminoe Ward, Osaka — to see the artistic spectacle with my own eyes.

The wall art comes in various sizes and styles and appears suddenly on street corners throughout the town, making a visit to the Kitakagaya district feel like a treasure hunt

From shipyards to art studios

Upon emerging from Kitakagaya Station on the Osaka Metro line in Suminoe Ward, Osaka, I was confronted with an unexpectedly ordinary town dotted with convenience stores, factories, a hospital, an elementary school and other buildings.

However, after entering a small lane branching off from Kagaya Elementary School, the ordinary gave way to extraordinary as I ran smack into a huge image of a boy.

Titled, appropriately enough, “A BOY,” the image by young artist Seiko Sakatani adorns a wall facing a parking lot. When a car is parked in front of the wall, it looks like the boy is playing with a toy car. On an opposite wall, popular video game character Super Mario performs his signature jump.

As I continued my stroll through ordinary-looking residential roads, I found myself under the gaze of Maetel, a character in the popular anime series “Galaxy Express 999,” and then encountered a female gymnast performing a high jump over a car stopper made to look like a balance beam.

The wall art comes in various sizes and styles and appears suddenly on street corners throughout the town, making a visit to the Kitakagaya district feel like a treasure hunt. 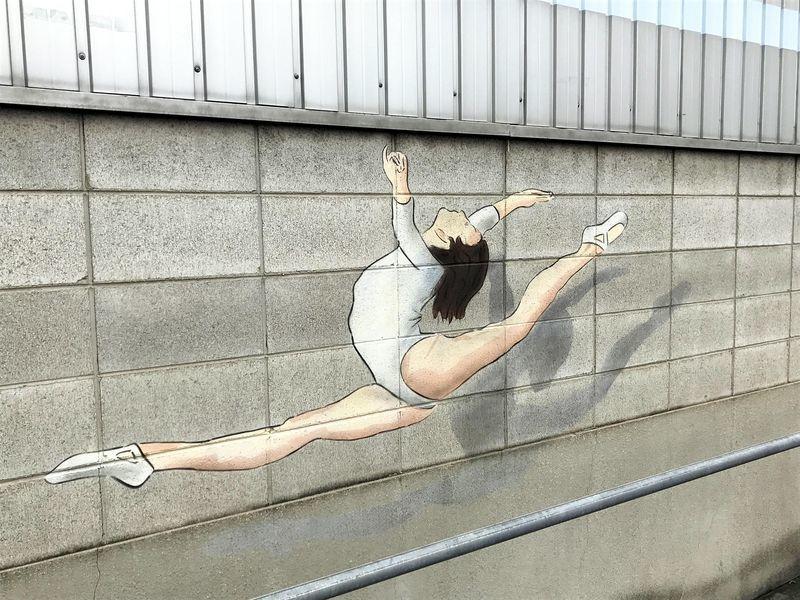 In this piece, the gymnast's shadow is also depicted to give the scene a touch of realism. (PHOTO / THE JAPAN NEWS)

During the Taisho era (1912-1926), many shipyards were built in the district, situated along the Kizugawa river near Osaka Bay. The area was one of the furnaces fueling modern industry in Osaka, which was once dubbed “the Manchester of the Orient.”

The district also flourished after World War II on the back of the shipbuilding industry, but its economic structure soon began to change, and Namura Shipbuilding Co. eventually moved its shipyard from the area. Since 1989, most land in the Kitakagaya district has been owned and operated by Osaka-based Chishima Real Estate Co.

For artists, it’s a real treat to have your work permanently displayed in a town, where it can be viewed by many random people

In the 2000s, a movement arose to convert the Kitakagaya district into an artistic hub. The real estate company took the lead in promoting the arts, including by reducing the rent on buildings and vacant houses that retain the atmosphere of the town’s shipbuilding past so that artists could use them as studios or places to display their work.

Aoi Kisaka, secretary general of the Chishima Foundation for Creative Osaka, a group playing a major role in the effort, said the flurry of artwork on building facades and other places “began seven or eight years ago in response to a street artist who requested they be allowed to paint graffiti in the town.”

Visitors can now enjoy about 20 different pieces of wall art. Among the most impressive is a work by British artist Ben Eine that features rows of letters in vivid colors across the entire wall of a former iron foundry.

The wall, measuring 7.5 meters by 12 meters, has letters that spell out: “SUCH A PERFECT DAY I’M GLAD I SPENT IT WITH YOU.” The lyrics are taken from a famous Western song, but each individual letter can also be viewed as a separate work of art.

Masagon, a 40-year-old artist who has a studio nearby, painted a pattern of interlacing geometric shapes on the wall of a factory in the district.

“For artists, it’s a real treat to have your work permanently displayed in a town, where it can be viewed by many random people,” he said. 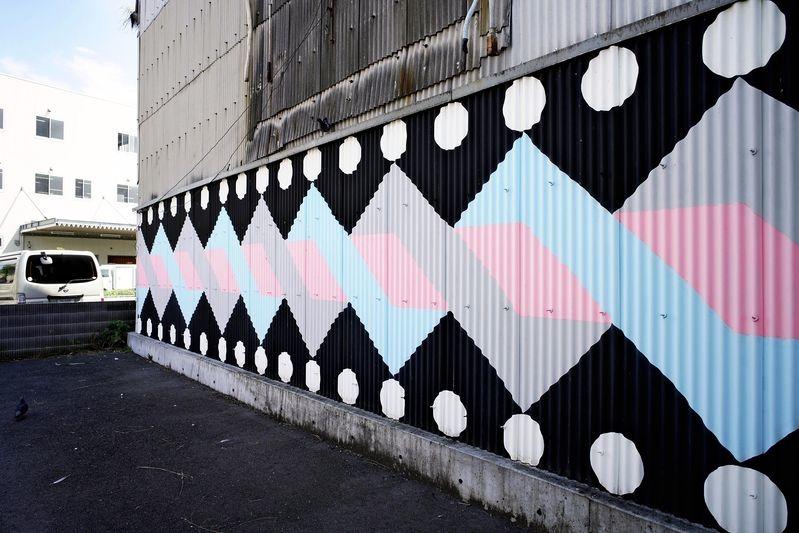 This undated photo shows Masagon's artwork featuring intertwining geometric shapes on the wall of a factory in the Kitakagaya, Osaka, Japan. (PHOTO / THE JAPAN NEWS)

Lining up for the perfect shot

Since then, the district’s popularity has risen rapidly. Young people clutching cameras and smartphones began to flock to the district, and on weekends and holidays lines even form in front of the artworks.

READ MORE: Painter places lacquer at heart of his creations

The Tokyo-based company operating the service, ttthree, and others began referring to the young women who visit the district as “kabejo.” They seek to take photos of themselves in front of fashionable backdrops to capture a more charming version of themselves, and show the photos to others.

Shuhei Komino, the president of the company, said, “It may be a longing for approval, but the desire to make oneself look cute is the same today as it was in the past.”

On the day I visited, young women stood taking photos and having themselves photographed in front of the graffiti, despite the piercing sunlight and blazing-hot temperatures.

One of them, Risa Hayashi, a company employee from Nishi Ward, Osaka, said with a smile, “I post photos taken here on Instagram, because I like when my friends ask me, ‘Where is this?’”

This “holy site of kabejo” also serves as a source of information about the latest trends in what’s fun and cute.