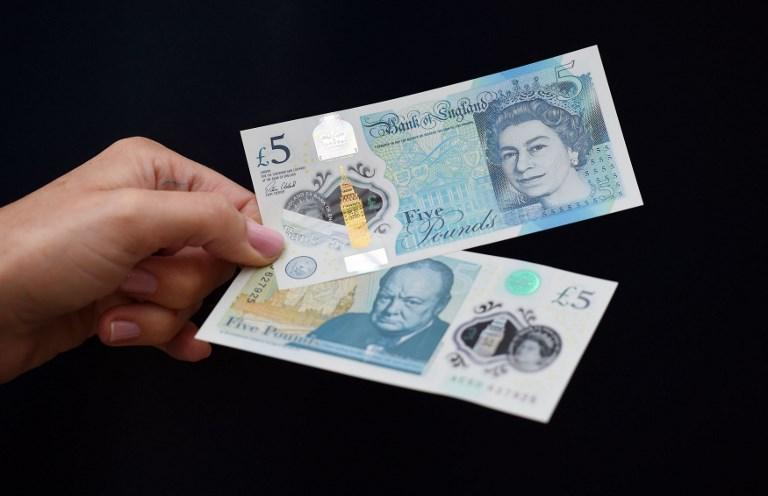 A woman looks at a new £5 banknote bearing the image of Winston Churchill at its unveiling by the Bank of England at Blenheim Palace in Woodstock on June 2, 2016. (JOE GIDDENS / AFP)

LONDON - Britain's new plastic bank notes will continue to be made with traces of animal fat despite thousands of complaints from vegetarians and religious groups.

The Bank of England said on Thursday there were environmental risks to using the alternative, derived from palm oil, and that the government had ruled it too expensive.

The BoE last year launched its first polymer banknotes which it said were more durable and harder to fake.

But more than 130,000 people signed an online petition calling on the BoE to stop using animal products in the notes after it emerged that they contained small amounts of tallow -- which comes from cows and sheep -- prompting the central bank to launch a consultation.

"The Bank fully recognizes the concerns raised by members of the public ... and has not taken this decision lightly," it said on Thursday.

The only alternative for its polymer banknotes was to use more expensive chemicals derived from palm oil, and that its suppliers were unable to commit to that in an environmentally friendly way, the BoE said.

Britain's planned new polymer 20-pound and its 10-pound notes, which will be launched in September, are also affected by Thursday's announcement.

The BoE said that as well as the environmental concerns about palm oil, cost was a consideration: the switch would add about 16.5 million pounds ($21.45 million) to the cost of making bank notes over the next 10 years.

"Her Majesty's Treasury advised the Bank that it does not believe switching to palm oil derivatives would achieve value for money for taxpayer," it said.