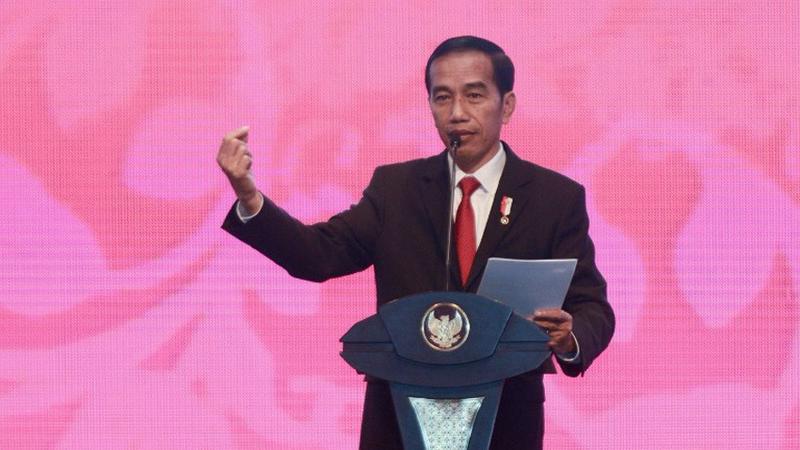 In this Sept 8, 2017 photo, Indonesian President Joko Widodo speaks during a Plenary Conference of The Asian Affairs Commission International Union of Notaries (CAAs-UINL) and International of The Indonesia Notary Association in Nusa Dua on the resort island of Bali. (SONNY TUMBELAKA / AFP)

JAKARTA - Indonesian President Joko Widodo has chosen 75-year-old cleric Ma'ruf Amin as his running mate in next year's presidential election, he said on Thursday, in a sign he wants to bolster his Islamic credentials. The two will likely be challenged by former general Prabowo Subianto.

On a dramatic day of political maneuvering and intrigue, Jakarta's deputy governor, Sandiaga Uno, was identified as a "99 per cent" certainty by a senior official from Prabowo's Gerindra Party to be his running mate.

But Amin's elevation may prompt a re-think, said Yusuf Martak, a cleric from the National Movement for Guarding Ulemas Fatwas, an Islamist group counseling Prabowo. 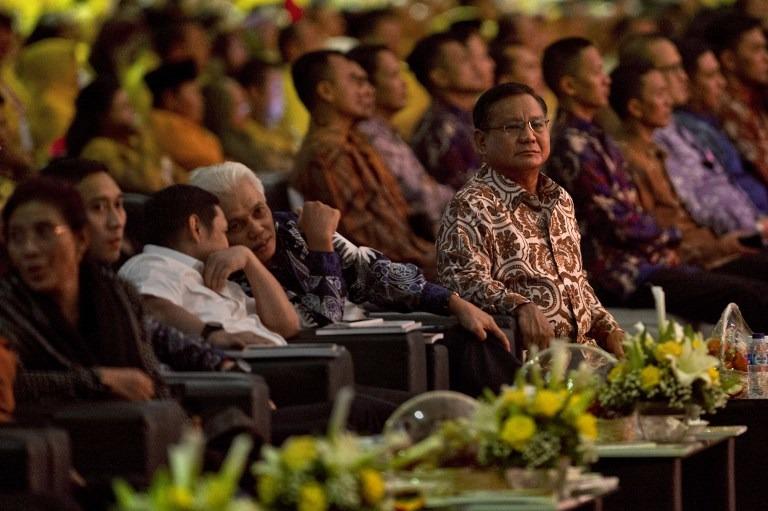 In this photo taken on Oct 28, 2014, defeated presidential candidate Prabowo Subianto (center right) sits with other dignitaries during the 50th anniversary celebration of the Golkar Party at the Jakarta international expo pavilion. (ROMEO GACAD / AFP)

Indonesia, the world's third-largest democracy and biggest Muslim-majority country, goes to the polls in April.

The contest, at least in terms of the presidential candidates, is shaping up as a repeat of the 2014 election, when political outsider Widodo defeated Prabowo, who has deep ties to Indonesia's business and military elite.

Widodo is a popular moderate who has had mixed success with his reform agenda. Prabowo is a charismatic nationalist with strong links to Islamists who frequently rails against foreigners.

Amin was on a list of 10 possible candidates for Widodo but his selection came as a surprise, not least because former chief justice Mahfud MD appeared to confirm he was the vice presidential choice of Widodo only hours earlier.

Amin is the influential head of the Indonesian Ulema Council and issued a statement condemning Widodo's political ally, the ethnic Chinese Christian former Jakarta governor Basuki Tjahaja Purnama, as a blasphemer for insulting the Koran in the middle of a heated Jakarta election campaign.

Amin has been a presidential adviser and has served in local and national legislatures in the past.

"Maybe there are questions from the people all over Indonesia why Professor Dr. Ma'ruf Amin was chosen. Because he is a wise religious figure," said Widodo.

"I think we complete each other, nationalistic and religious."

Arief Poyuono, the deputy chairman of Gerindra, told Reuters that Uno's elevation was a "99 per cent possibility". Asked what the 1 per cent doubt was, he replied "God".

But the proposed choice of Uno risks rupturing the opposition coalition.

A senior official from one opposition coalition party - deputy secretary general of the Democrat Party Andi Arief - described Prabowo as a "cardboard general" and a "chicken" in a stream of derogatory comments posted on social media on Wednesday night.

Agus Yudhoyono, a 39-year-old retired soldier and the former president's son, was expected to be the vice presidential candidate after the deal.

"I have had doubts for a long time whether (Prabowo's) voice matches his mentality. He is not a strong leader, he is a chicken," Arief tweeted.

Prabowo went to the elder Yudhoyono's home on Thursday. Leaving the meeting, Prabowo declined to discuss what transpired.

Asked when he would declare his candidacy and whether Uno would be his running mate, he said: "The process is ongoing. Relax."

Gerindra's secretary general, Ahmad Muzani, who accompanied Prabowo when meeting Yudhoyono, said the atmosphere during the meeting was friendly, although they did not come to a decision on who gets to be the vice presidential candidate.

Uno did not respond messages and calls from Reuters but local media quoted him saying on Thursday that he had not resigned as Jakarta deputy governor.

"I'm still on duty," he said, according to local news portal detik.com. "No resignation letter has been drafted."

Uno, a wealthy private equity tycoon, is a member of Gerindra and reportedly met Prabowo at his home on Wednesday.

He played a pivotal role plotting the campaign to oust then incumbent governor Purnama. After the victory, Uno said it was regrettable race and religion had dominated the campaign.

Gerindra's Poyuono said the Prabowo-Uno team would mean the opposition had candidates from both Java and outside Indonesia's most populous island. Uno has roots in Gorontalo in Sulawesi.

Many Indonesians from outside Java resent Java's political and economic dominance.