Weaving silk from lotus in Vietnam 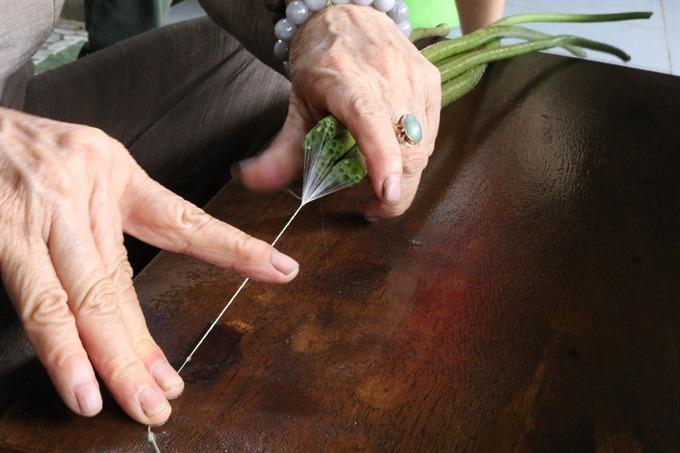 HANOI - The fine strands that can be extracted from the delicate lotus flower have the potential to be combined with the silk produced by worms.

On a bright day in a tranquil village by the Day River about 50km from Hanoi, a silkworm workshop is full of life.

Thousands of silkworms are secreting tiny clear thread of silk “working” on a flat mat within wooden frames to make natural silk blankets.

By a window looking over the river, Phan Thi Thuan, the owner of the workshop, is working on an experiment – weaving fabric from "lotus silk". Over her 40 years in the industry, Thuan has become well-known for weaving natural silk into unique blankets.

Carefully holding several lotus stems in her hands, Thuan lays them neatly on her desk.

Using a small knife, she gently makes a cut in each of the stems, which then opens to pull out a small amount of cellulose thread from the cuts. Using water, her skillful fingers arrange the threads, which will be used later to weave lotus "silk" fabric.

“The idea was actually proposed to me by Tran Thi Quoc Khanh, a member of the National Assembly representing Ha Noi,” Thuan told Viet Nam News. 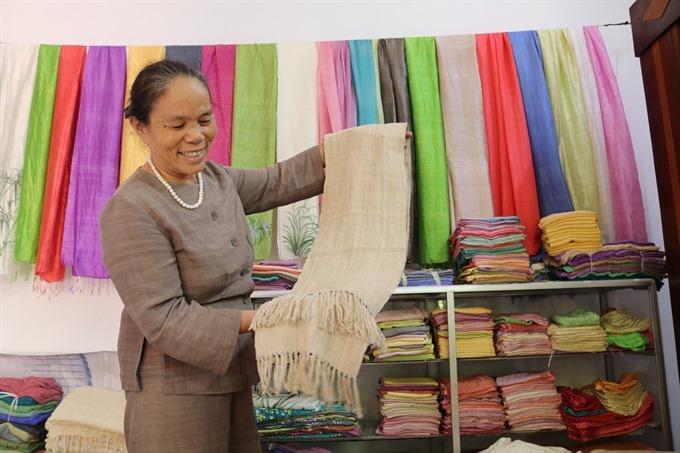 In this undated photo, Phan Thi Thuan poses for a photo with a scarf made of lotus silk. The scarf has a distinctive lotus scent. (PHOTO / VIET NAM NEWS)

Khanh encouraged Thuan to go to Cambodia and Myanmar to learn about weaving "lotus silk", but Thuan insisted she would try it by herself, then go later.

Her village has many lakes and ponds with abundant lotus flowers. Since January 2017, Thuan has tried various ways to extract the most thread from lotus stems.

“The stems from mature lotus flowers offer the strongest and most beautiful thread, but if they are too old the thread is difficult to extract and cut,” she said.

Silk from lotus stems is softer and more flexible than silk from worms. It doesn’t shrink as much as silk from worms, but in my experience, ’lotus silk’ doesn’t last as long

After many failed attempts, Thuan finally succeeded in making a scarf from "lotus silk" with a distinctive scent.

“Silk from lotus stems is softer and more flexible than silk from worms,” she noted. “It doesn’t shrink as much as silk from worms, but in my experience, ’lotus silk’ doesn’t last as long.”

Thuan says that when she puts lotus silk into water, it starts to wrap around her hands.

A silk worm eats mulberry leaves for 20 days, then it secretes silk threads to form a silk nest (cocoon) surrounding its body.

ALSO READ: Wrapped in silk and bound by threads

The cocoon should be boiled before the silk is removed for weaving.

“Skilled workers can extract lotus silk from 260 stems per day to produce about 175m of thread,” she said, “Depending on its thickness, a scarf made from ’lotus silk’ requires at least 1,500 stems.”

“I think if I mix lotus and worm silk, I can produce a new mixed silk for a lower cost that lasts for longer than pure ’lotus silk’,” Thuan said. "But I need more time to confirm that."

“If we had a market for ‘lotus silk’ fabric, it would be easier for me to develop this new kind of "silk" and create more jobs,” Thuan said. 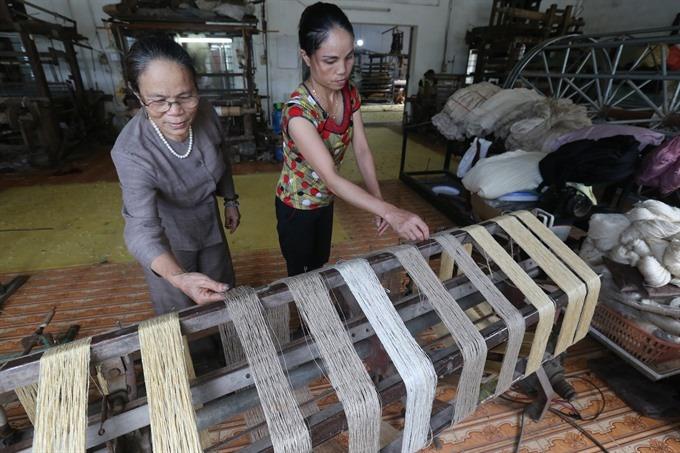 This undated photo shows silk extracted from lotuses at a silkworm workshop in Hanoi, Vietnam. Skilled workers can get 175m of thread per day. (PHOTO / VIET NAM NEWS)

After she completed her first scarf last year, Thuan took a trip to Cambodia to visit some "lotus silk" workshops.

“I realised that their products were no better than mine,” she said. “I can do better.”

Thuan’s project has been adopted by the Ha Noi-based Institute for Ecological Economics under the Union for Science and Technology Associations.

“We proposed the project as a national trial model to produce silk from lotus flowers funded by the State budget for the Council of National Projects,” said Nguyen Duy Chuyen, director of the institute.

Then our experts took a field trip to Myanmar to see how they weave "lotus silk" cloth.

We chose Thuan’s silk workshop in My Duc District as a trial model in the north as she has become an artisan in silk and could quickly find out the best way to get silk from lotus stems, he said.

According to a research paper by Ha Chu Chu, Nguyen Thi Minh Tam and Dinh Thi Minh from the institute, based on the availability of lotus flowers in Vietnam, the country has great potential for producing "lotus silk".

Their research also found that humidity affects the flexibility of "lotus silk".

“The research will be useful to adjusting the process of planting lotus and collecting silk from lotus stems,” Chuyen said.

“We will co-operate with the Textile and Garment Institute to research and judge the quality of silk from Vietnamese lotus stems and propose ways to enhance the quality and reduce the cost,” Chuyen said.

Experts will then apply other technology to the weaving and dyeing processes to increase the value of "lotus silk".

Chuyen said next year, the project will move to Dong Thap Muoi (Plain of Reeds in the Mekong Delta), which is home to the largest area of various lotus species in the country.

“'Lotus silk' is as fragile as smoke but it’s quite valuable as it takes so much labour,” Thuan said. “It’s like a gift from Mother Nature.”

“I hope designers will think about using ‘lotus silk’ in high fashion products other than just plain clothes,” she added.