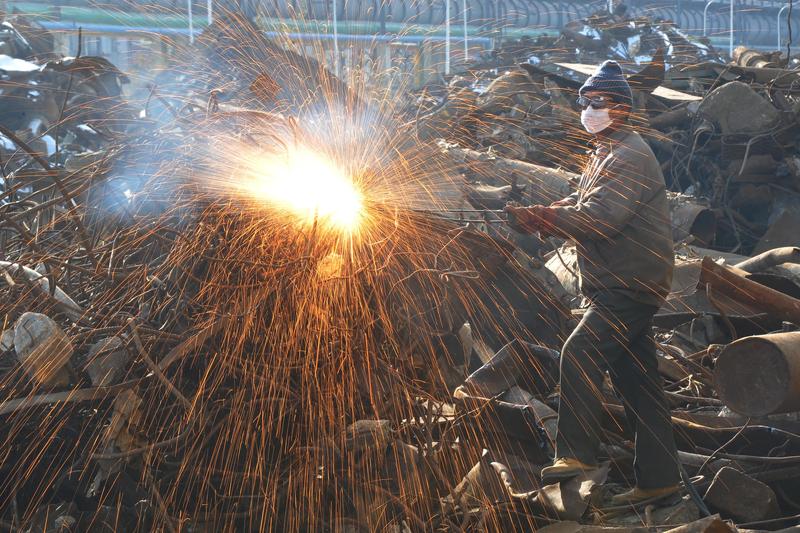 An employee from a steel recycling firm works at a storage facility for scrap steel in Dalian, Liaoning province. (LIU DEBIN / CHINA DAILY)

An impending policy to tighten scrap steel imports is bound to shake up the domestic market, but the influence will be limited, said experts.

China recycles steel at less than half the rate of the rest of the world. In 2017, roughly 17% of scrap steel in China was recycled, compared to a world average of 35.5%

"With an emerging trend that many steel recyclers are seeking to set up branches overseas, the industry is unlikely to be impacted, as imported scrap steel makes up a very small part of total scrap steel consumption, which is about 1 percent," said Guo Daqing, chief-researcher and analyst from the industry newspaper China Metallurgical News.

Guo noted that the policies might lead scrap steel dealers to stock up in the short term, but in the long term, the market will remain stable.

Scrap steel recycling is considered an important way to obtain steel and prevent the waste of useful materials.

For some metals on the list, such as copper, industry insiders said there might be new quality standards to further classify imported scrap either as solid waste or regular goods, with the latter likely to be exempted from import restrictions. However, Guo said he hadn't heard of such a clause for scrap steel.

That followed plans in 2017 from the central government that it was gradually looking to reduce imports of solid waste products in various kinds and volumes.

Such moves are leading to substantial drops in imported scrap. A report from the People's Daily said total imports of solid waste products fell by 52.8 percent year-on-year, to 18.6 million metric tons in November.

The moves were considered a part of the country's larger efforts to battle pollution issues in heavy industries.

"Recent years have seen rising concerns over environment pollution although the recycling rate for scrap steel and many other metals is not as high as many other countries," he added.

China recycles steel at less than half the rate of the rest of the world. In 2017, roughly 17 percent of scrap steel in China was recycled, compared to a world average of 35.5 percent.

"However, there were many small and medium-sized companies that melted scrap steel in induction furnaces, a procedure that can save costs and requires less advanced technology, but produces an inferior quality steel and creates challenges to environmental protection," Han said.

"Luckily such companies were also sidelined alongside the scrap steel import restrictions."

Guo of China Metallurgical News noted that despite recent tightening policies on scrap steel imports, it will see a boom for a long time in China.

"Many recycling processes, such as electrosmelting, are environmentally friendly and a lot less costly to steel-makers when compared with importing raw materials or mining, and then processing," he said.