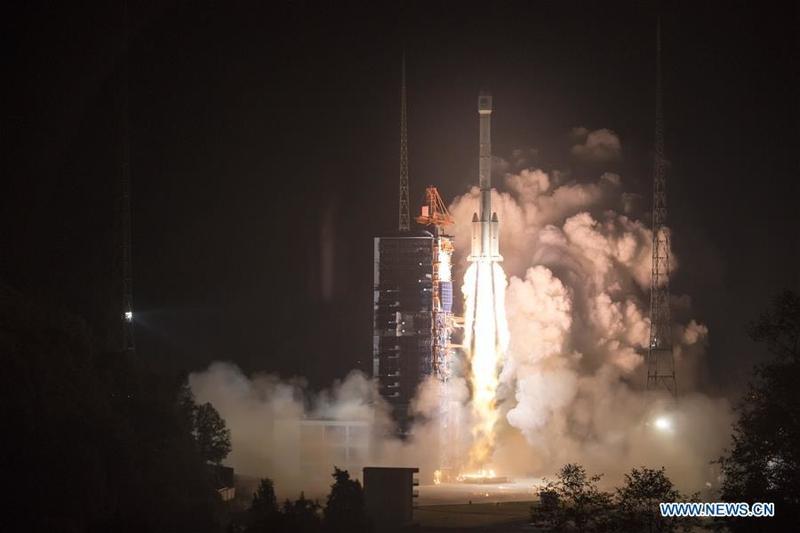 XICHANG — When the Chinese invented the compass, humanity steered into uncharted waters. Now China is navigating the world in the new era of global exchange with a new option — its fledging BeiDou Navigation Satellite System (BDS).

With the launch of two new BDS-3 satellites on Monday, China will complete the basic navigation system and start to provide services for countries participating in the Belt and Road initiative by the end of this year.

"This is a key step for BDS developing from a domestic Chinese system to a regional and then a global navigation system," said Yang Changfeng, chief designer of the BeiDou system.

China plans to launch another 11 BDS-3 satellites in the coming two years. By the end of 2020, the BeiDou system, named after the Chinese term for the Big Dipper constellation, will become global, and provide high-precision, reliable positioning, navigation and timing services anywhere in the world.

In 2018, altogether 18 BDS satellites were sent into space from the Xichang Satellite Launch Center in southwest China's Sichuan Province.

"This year has seen the most intensive launch of the BDS satellites. We improved our work efficiency by reforming the management process. The number of satellite staff at the launch center has been reduced by nearly half, and the testing time before launch has been shortened by nearly a third," said Chi Jun, head of the BDS-3 satellite team from the China Academy of Space Technology (CAST).

Chi has been in the valley of the launch center for more than six months. But he has never seen a BDS satellite launch, as he has to monitor data on a computer each time.

In the CAST production base in Beijing, several BDS satellites are being manufactured at the same time.

"We try to improve intelligent manufacturing capability, and cut down production times, thus accelerating the construction of the BDS-3 system," Chi said.

Wang Jingang, deputy chief designer of the BDS-3 satellites, has participated in the development of BDS-1, BDS-2 and BDS-3 systems. "It's a rare chance to devote my intelligence to a symbolic national project."

Experience of failure has left a deep impression on him. A BDS-2 satellite failed in orbit in 2009. To identify the fault, the whole team of the satellite developers stayed in their office building for more than a month, working till midnight every day.

"It was an unforgettable experience, and if the fault were not found, we would be punished by failure again." Wang said.

Eventually, they found the cause of the breakdown and the solution. Since then, all Chinese satellites have avoided similar problems.

"When friends or relatives learn that I am working on the development of the BDS satellites, they often show me the BDS signals on their mobile phones. People still mainly depend on navigation by GPS, supplemented by BDS. I hope that in a few years, people can be navigated mainly by BDS," Wang said.

China decided to build its own satellite navigation system in 1994, and the BDS-1 system was completed in 2000. Although its service area was limited and its accuracy was not high, China had created its own navigation system starting with only two satellites.

Then it took China eight years to construct the BDS-2 system with over a dozen satellites, which began to service the Asia-Pacific region in 2012.

China started to build the BDS-3 system in 2009 with greatly improved technologies. Communication, data transmission and ranging among satellites can be achieved through inter-satellite links. The design life of the BDS-3 satellites has been extended from BDS-2's eight years to more than 10 years.

The system's signals and positioning accuracy have improved significantly. The BDS-3 satellites are equipped with high-precision rubidium and hydrogen atomic clocks independently developed by China. These are only a second off time every 3 million years.

The positioning accuracy of the BDS-3 system has been improved to 2.5 meters to 5 meters, according to Yang.

"Like high-speed rail, BDS has become a symbol of China. All the key BDS components were developed and manufactured in China," said Xie, who has been involved in its construction for 16 years.

BDS is compatible with other navigation systems, such as GPS, and users can receive services from those systems at the same time, improving positioning accuracy, Chi said, adding some BDS satellites also carry payloads to provide international rescue services for users around the globe.

"Chinese wisdom is contributing to the development of satellite navigation systems," Chi said.