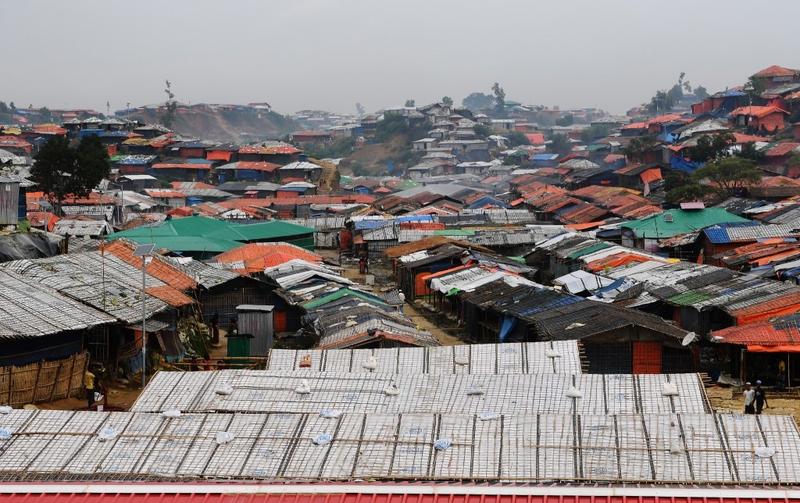 This Aug 24, 2018 photo shows the sprawling shelters set up by refugees from Myanmar's Rakhine state at the Balukhali refugee camp in Ukhia in southern Bangladesh. (DIBYANGSHU SARKAR / AFP)

UNITED NATIONS – An informal trilateral meeting involving officials from China, Myanmar and Bangladesh at the United Nations (UN) headquarters in New York on Monday produced three points of consensus on the Rakhine issue.

As a friend of both Myanmar and Bangladesh, China is ready to provide assistance within its capacity, said Wang Yi

Wang said China, Myanmar and Bangladesh have held three informal foreign ministers' meetings since last year, with each of the countries making progress, and that a lot of work has been done concerning the repatriation of people fleeing the chaos in the Rakhine state of Myanmar.

The conditions for resolving this issue are maturing, he said, adding that all parties should further strengthen communication and consultation and push for substantive progress on the repatriation issue as soon as possible.

As a friend of both Myanmar and Bangladesh, China is ready to provide assistance within its capacity, he said.

The officials from Myanmar and Bangladesh and the UN greatly appreciated and thanked China for its substantial and constructive efforts in promoting the proper settlement of the repatriation of people fleeing from chaos in the Rakhine state, and agreed to further seek effective ways to solve the issue as soon as possible through cooperation.

The meeting reached three points of consensus. Firstly, it is the strong political will and important political consensus of the three parties that can realize the repatriation at the earliest. Both Myanmar and Bangladesh agreed that the issue cannot be postponed any longer and should be resolved at an early date.

They also agreed to establish a China-Myanmar-Bangladesh Joint Working Group mechanism, with Myanmar and Bangladesh as the main body and China participating, which will be responsible for the implementation of repatriation-related work under the political guidance of the foreign ministers of the three countries.

The three also sides agreed to strengthen tripartite cooperation, especially by making good use of the existing bilateral cooperation mechanisms between China and Myanmar as well as China and Bangladesh, to help the Rakhine state and the Myanmar-Bangladesh border areas boost employment and improve people's livelihoods, and to fundamentally create conditions for the realization of the region's stability and development.