By Tian Xuefei and Zhou Huiyang in Harbin 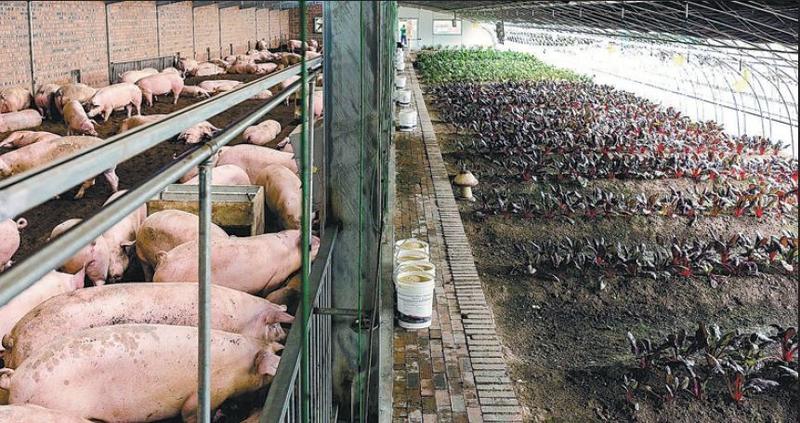 Inside the largest greenhouse of Jinzhe Animal Husbandry Co in Harbin, about 300 pigs are raised with plants in an environment that has little odor. (PHOTO PROVIDED TO CHINA DAILY)

Raising pork comes with problems worldwide. Now, innovative Chinese farmers are using science in a circular system to improve the quality of meat and eliminate the usual pollution.

House of straw. House of sticks. House of bricks. And now the legendary Three Little Pigs can choose a multipurpose scientific greenhouse with a comfortable fermentation bed.

With its spacious, clean grounds, rows of immaculate greenhouses, pleasant trees and almost no foul odors, this is no ordinary pig farm. Refreshingly lacking is the churned-up excrement, the stench and the polluting byproducts of a traditional operation.

Inside one of the structures - which performs double duty as an upscale house for pigs and a greenhouse for growing vegetables - the unpleasant smell of swine is faint, even though the animals are milling around in the next room like guests in a swanky pig hotel.

These pigs have gone high-tech, in a nonpolluting symbiotic relationship with vegetable gardens, and the results are encouraging.

If pollution from pigs can be dramatically reduced on a large scale, it's good news for China, where 700 million of the animals were raised last year, and equally good for the rest of the world, where industrial-scale farms have been supplanting small operations for decades and bringing big waste management problems in their wake.

The Yabuli Forestry Bureau in Heilongjiang province joined an innovative project in 2017 that could pave the way for more pig farmers across China to use environmentally sustainable methods.

In a testament to the concept, around 20 similar operations have sprouted in the country since the first one in 2011, lifting pigs out of their usual squalid and malodorous hovels and giving them new accommodations in a circular natural system.

The lucky pigs now have a clean, spacious place to live and fatten up for market, in contrast to the cramped indoor conditions of many major operations. Pollution is sharply cut, and fruits and vegetables are produced - Chinese cabbage, eggplant, tomatoes, peppers, sugar beets, lettuce, strawberries and melons - with some fed to the pigs and some provided to the company cafeteria for employees. Commercial sales are expected to expand later. 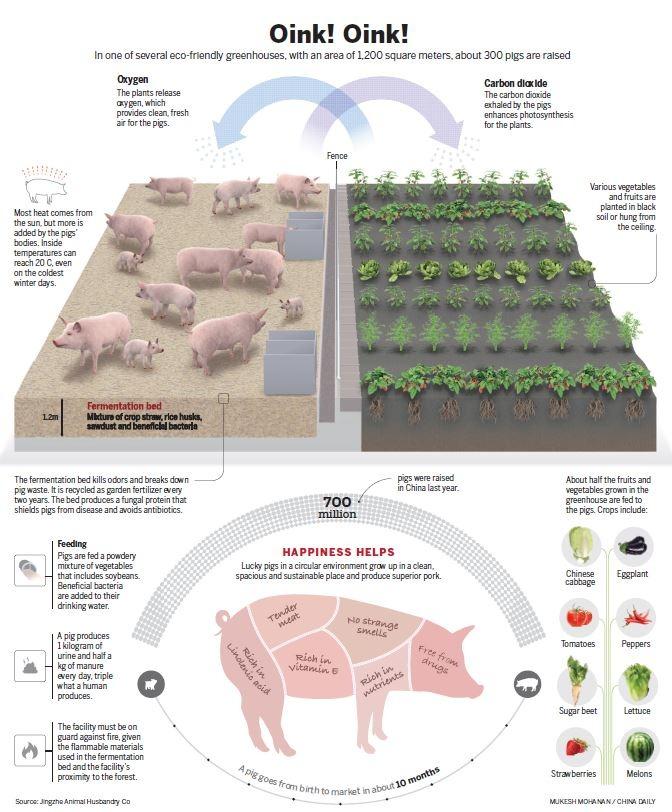 Elsewhere, in many of China's rural areas, pig waste has become a significant problem, partly due to farmers' indifference to environmental protection and a lack of smart waste management techniques.

"Every day, one pig produces a kilogram of urine and a half kilogram of manure, which adds up to a very big number when thousands of pigs live together," said Lu Xinhua, who works for the forestry department.

"Between 2004 and 2007, I raised 200 pigs on a farm where three people spent several hours a day washing the pigsty, and all the untreated waste flowed into the soil and nearby pond."

Pig waste, which contains a mass of organic matter and harmful microorganisms can change the structure of soil and destroy its basic function, resulting in lower crop yields, according to one agricultural thesis. It can also pollute the groundwater that may be a region's primary water source.

ALSO READ: Year of Pig bodes well for having babies

"Because I spent most of my time on the farm, the bad smell stuck to me even after I showered," Lu said.

With the forestry department's new greenhouses and circular production cycle, that's a thing of the past.

"This is a significant attempt to transform traditional industries to a green, low-carbon and circular economy," said Ren Liquan, director of Yabuli Forestry Bureau. "We will promote the technology in the whole bureau and even in the whole province in the future."

Within a few months of the launch, seven greenhouses were in service at the 40,000-square-meter base in Harbin, Heilongjiang province, each costing about 1 million yuan (US$145,000).

The result: high-quality pork for consumers.

Under the bureau's model, pork costs no more to produce but the meat is of higher quality. Consumers are willing to pay double the normal price to get meat untainted by antibiotics or traces of other shadowy substances that can be detected by the tongue.

According to Wang Tianzhong, director of the operation, meat from happy pigs is infused with no strange smells. When it's cooked it's unusually tender.

It's also rich in nutrients, such as linolenic acid, an essential substance the human body must get from outside sources. The unsaturated fatty acid helps prevent obesity and diabetes, improves the skin and reduces cancer risk, Wang said.

"Our meat is rich in vitamin E, which is hardly found in traditionally raised pork," he said.

At the same time, the downsides of pork production diminish.

The circular-system farm is a promising economic breakthrough industry for the State-owned forestry bureau, which stopped all commercial logging in 2014.

In the largest greenhouse, about 300 pigs are raised in a partitioned room - half for the pigs and half for growing vegetables.

The floor is covered with a thick, brown, powdery mixture of crop straw, rice husks and sawdust 1.2 meters thick. It acts as a natural fermentation bed, adding beneficial bacteria that helps break down pig excrement's ammonia and hydrogen sulfide. It is replaced every two years.

In the other half of the greenhouse, various vegetables are planted in black soil, releasing oxygen and providing clean, fresh air for the pigs.

"Raising pigs in this way cuts waste down to zero and requires less human effort," Wang said. "The two friendly neighbors, pigs and plants, help each other. The carbon dioxide exhaled by pigs enhances photosynthesis for the vegetables."

To drive the waste fermentation process, certain bacteria are needed, and a lot of heat can be produced, similar to that of a garden compost pile. Additional warmth is generated by the pigs themselves. Heat is held in by the greenhouse membrane, and the house can reach 20 C naturally, even during Harbin's bitingly cold winters, when outside temperatures can plummet to-30 C.

"To ensure the quality of the beneficial bacteria, we usually collect strains near the pig farm," said Han Guosheng, a researcher from an ecological agriculture technology company in Beijing that tailored the technology for China in 2011, based on earlier advancements in Japan.

The facility must be on guard against fire, Wang acknowledged, given the flammable materials used in the fermentation bed and the facility's proximity to the forest.

The problem of pig waste is international, and solutions vary. In the state of Utah in the United States, for example, a subsidiary of Smithfield Foods - the largest producer of pork in the US, which is owned by WH Group of China - keeps about 500,000 pigs in a remote area.

Because the pigs produce three times as much excrement as humans, those half-million animals generate more waste than 1.5 million of their two-legged counterparts.

Pollution is being addressed by capturing the methane gas from pig waste and converting it to biofuel that generates electricity - initially enough to power approximately 3,000 homes. Expansion is expected.

The lead company on the project, Alpental Energy Partners, estimated it could produce 25 million kilowatt hours a year by operating round the clock. But it had to ensure that liquefied manure's methane, a harmful greenhouse gas, would neither contaminate groundwater nor degrade air quality. 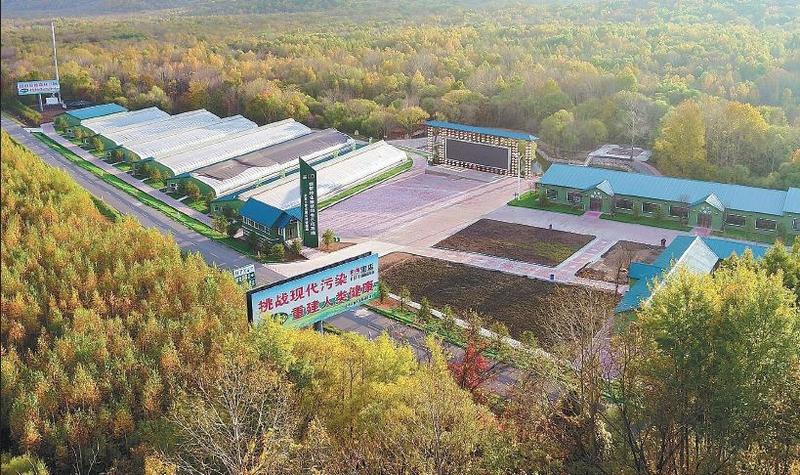 Jngzhe Animal Husbandry Co in Harbin, Helongjiang province, has several greenhouses for raising pigs. It is one of about 20 such environmentally friendly pig farms in China. (PHOTO PROVIDED TO CHINA DAILY)

In China, food safety has become a major concern, said Wang, the operations director in Harbin.

"Pigs raised in eco-friendly houses are cleaner, disease-free and drug-free," he said. "Unlike those on traditional farms, our pigs are fed only vegetables - a powdery mixture that includes soybeans and beneficial bacteria.

"Beneficial bacteria added to the fermentation beds can dramatically reduce the rates of disease, thereby avoiding antibiotics. That eases consumers' worries about antibiotic residues in pork."

A pig goes from birth to market in about 10 months, he said, noting that the low density of pigs in the greenhouses allows them to run freely, which helps them grow in a healthy way.

That's in contrast to conventional industrial-scale pig raising globally, which has been criticized as uncomfortable and even cruel to the animals.

In a quirky business sideline offered at the Harbin base, consumers who want to experience a bit of rural life and develop a personal relationship with their food, can adopt a piglet by paying a fee of 4,380 yuan. Ten months later, the adult hog can be taken to a butcher shop and turned into sausage, bacon, pork chops, ribs or other products.

"It satisfies some people's appetite for a farm connection," Wang said, adding that more than 50 piglets were adopted by people in Harbin, Beijing and Qingdao, Shandong province, last year. Besides the high-grade pork, they get a delicious sense of doing the right thing for the environment.