SpaceX capsule back at space station with pre-Christmas haul 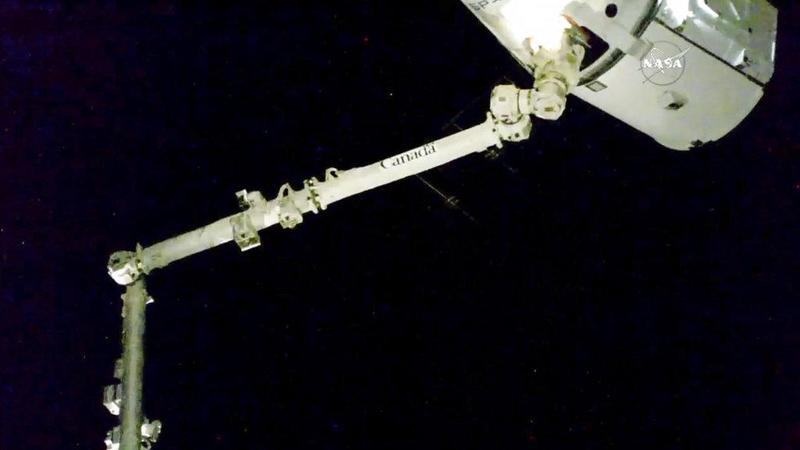 In this image taken from NASA Television, the robotic arm reaches out and captures the SpaceX Dragon cargo spacecraft for docking to the International Space Station, Dec 17, 2017. (NASA VIA AP)

CAPE CANAVERAL, Fla. — A recycled SpaceX capsule is back at the International Space Station, just in time for Christmas.

NASA astronauts used the space station's big robot arm to grab the Dragon capsule out of orbit Sunday. It's the second visit for this particular supply ship, which made a delivery for NASA back in 2015 as well, and only the second time a Dragon has had a repeat performance 250 miles up.

It's a beautiful spacecraft, and we're looking forward to digging into it and getting some science on board

"It's a great day to see Dragon back at ISS again," Mission Control radioed.

Replied spaceman Joe Acaba: "It's a beautiful spacecraft, and we're looking forward to digging into it and getting some science on board."

Acaba assisted Mark Vande Hei in capturing the Dragon as the two spacecraft raced over the Pacific, midway between Australia and New Guinea. Flight controllers in Houston then took over, securing the capsule to its berthing spot just over two hours later.

SpaceX launched the Dragon from Cape Canaveral on Friday, using a previously flown Falcon rocket. It was the first time SpaceX had flown a recycled rocket with a recycled capsule on top, at the heart of the company's effort to drive down launch costs.

The Dragon holds nearly 5,000 pounds of station goods, including lab mice and barley seeds, the latter a Budweiser experiment. The beer maker — eager to serve the first brews on Mars — wants to see how well the 20 barley seeds sprout in weightlessness.

But NASA did share that it electronically sent up a copy of the newly released Star Wars: The Last Jedi movie on Friday, as a special holiday treat for the astronauts.

The two Americans and one Russian on board will be joined Tuesday by another trio — US, Russian and Japanese — who launched earlier Sunday from Kazakhstan.

SpaceX plans to keep its Dragon at the orbiting outpost until mid-January. The Dragon is the only supply ship capable of returning experiments to Earth; all the others burn up on re-entry.

NASA has been relying on commercial shippers SpaceX and Orbital ATK to keep the space station well-stocked, ever since the shuttles retired in 2011. Russia also has a fleet of cargo carriers.