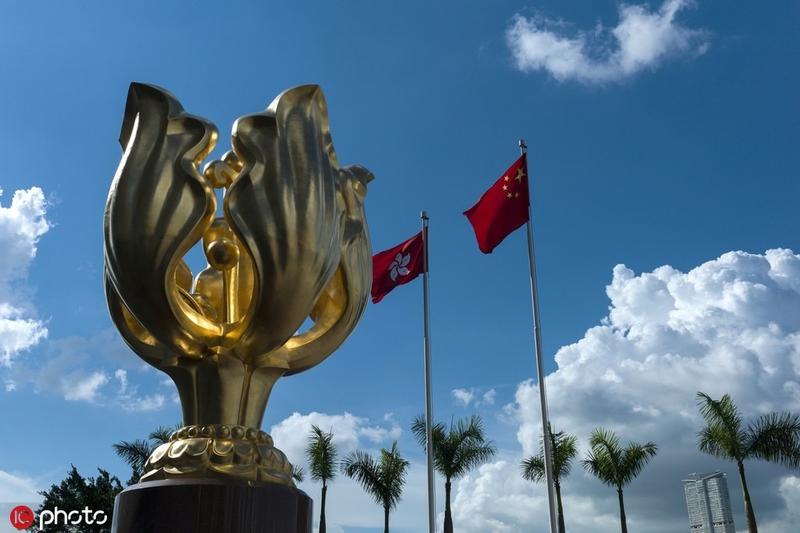 The Hong Kong flag, left, and the People's Republic of China flag, right, fly next to the statue of a Golden Bauhinia flower in Hong Kong, June 7, 2017. (PHOTO / IC / CHINADAILY.COM.CN)

Social harmony and stability have been crucial to sustaining the social development and economic vitality of the Hong Kong Special Administrative Region. These are now at risk of being undermined by the controversies surrounding changes to the SAR’s extradition laws.

This explains why Chief Executive Carrie Lam Cheng Yuet-ngor decided on Saturday to suspend the legislative process for amendments proposed by the SAR government to the Fugitive Offenders Ordinance and the Mutual Legal Assistance in Criminal Matters Ordinance.

The unwarranted political wrangling and violent radicalism are harmful to Hong Kong, and will inflict serious damage not just on social stability but also the economy, as evidenced by the seriously adverse consequences of the “Occupy Central” in the autumn of 2014.

ALSO READ: Hong Kong must say no to violence and 'mobocracy'

Business activities in the first month of the 79-day Occupy demonstration dropped at the fastest pace in three years, with the HSBC Hong Kong Purchasing Managers’ Index — a survey of business conditions — falling to 47.7 in October from 49.8 in the previous month.

While estimates of the total economic losses caused by the protest campaign vary, they are calculated to have been hundreds of billions of Hong Kong dollars, HK$350 billion (US$44.7 billion) in the reckoning of Professor Francis Lui of the Hong Kong University of Science and Technology, for instance.

Already, the violent protests against the proposed amendments to the SAR’s extradition laws are taking their toll on Hong Kong’s asset markets, with the local stock market tumbling and home sales declining over the past couple of weeks. While official figures are yet to be made available, economists and analysts already fear they are having a negative impact on the real economy.

Amid the uncertainty brought about by a worsening global economic situation and the on-going trade conflicts between the Chinese mainland and the United States, the SAR’s two biggest trading partners, the social turmoil is only inflicting unnecessary suffering on the SAR’s economy and local residents.

The manufactured radicalism that has brought people onto the streets is dividing Hong Kong society and damaging the city’s reputation for law and order. The last thing hard-working Hong Kong people want to see is the squabble over the proposed rendition law amendments being hijacked by people who have an axe to grind with China and are trying to make young people unwitting pawns in their attempt to advance their own agenda at the expense of Hong Kong society’s overall interests, as well as those of the nation.