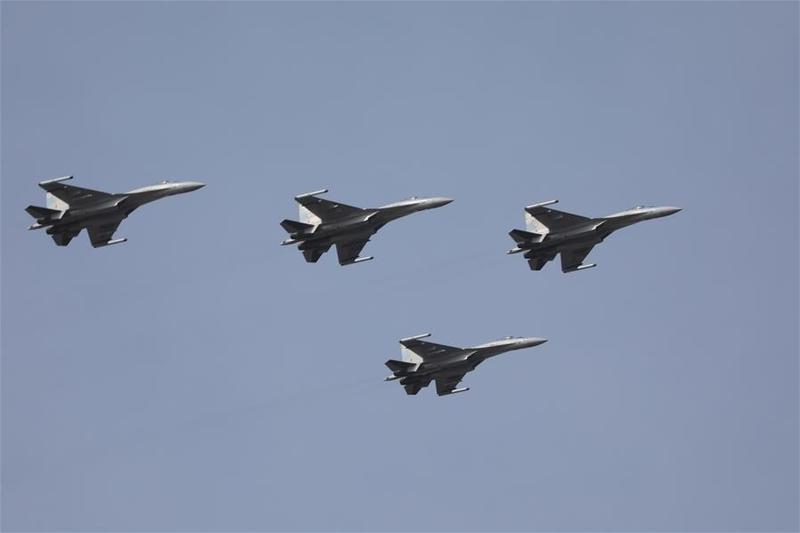 The Defense Ministry warned Taiwan separatists on Thursday that their secession efforts are "dead ends" and the Chinese military will take further action if they continue their "reckless activities".

Senior Colonel Wu Qian, a ministry spokesman, made the remarks at a news conference following flights by multiple fighter jets, H-6K bombers and early warning airplanes of the People's Liberation Army Air Force around the island of Taiwan on Thursday morning.

The training was aimed at improving the planes' combat readiness and actual fighting capabilities above water, Senior Colonel Shen Jinke, spokesman of the PLA Air Force, said in an online statement on Thursday.

"The treasure island is within the motherland's embrace, and protecting our country's beloved territory is a sacred duty of the Air Force," Shen said, adding the Air Force has deployed many planes, including the H-6K bombers, to fly around the island since April 18.

The treasure island is within the motherland's embrace, and protecting our country's beloved territory is a sacred duty of the Air Force

In response to media questions about the flights, Wu said the training exercises are aimed at improving the Air Force's ability to safeguard national sovereignty and territorial integrity. "Secession activities by Taiwan separatists is the biggest threat to cross-Straits relations," he said.

"These activities undermine the fundamental interests of the Taiwan people, and our actions are targeting those separatists and their activities," Wu said.

"If the Taiwan separatists were to continue their reckless activities, we'll take further action against them," he said.

ALSO READ: Military drills a show of force to Taiwan

When asked to comment about Taiwan's military drills this month, Wu said the mainland will make sincere efforts to pursue peaceful unification.

"But I must stress that Taiwan secession efforts are a dead end," he said, adding that "there is no way out" for Taiwan to confront the mainland militarily to resist unification.

Senior Colonel Ma Gang, a professor from the PLA National Defense University, said that Taiwan unification is a key part of the great rejuvenation of the Chinese nation, and efforts to split the island from China "go against the trend of history and the wishes of the Chinese people".

Secession activities by Taiwan separatists...undermine the fundamental interests of the Taiwan people, and our actions are targeting those separatists and their activities

"No country in the world will allow its territorial integrity to be violated by separatists and foreign powers," he said. "The Taiwan separatists are becoming more arrogant recently. The Chinese mainland has exercised the utmost sincerity and restraint, but its patience is not limitless."

He added, "If the secession efforts grow indefinitely, the PLA has no choice but to unify Taiwan through force as stated in the Anti-Secession Law."

The missile is completely designed by China, and is capable of rapid retaliation with nuclear warheads and mid- to long-range precision strikes using conventional warheads against land targets and large naval ships, he said.

The Su-35, built by Russia's Komsomolsk-on-Amur Aircraft Production Association, is one of Russia's most advanced and well armed multipurpose fighter jets, according to the Russian news agency TASS.

Wu also announced that the outfitting process and system calibrations for China's first domestically designed aircraft carrier, currently known as 001A, have been going smoothly. The ministry will announce the "good news", referring to the ship's first sea trial, in the near future, he said.