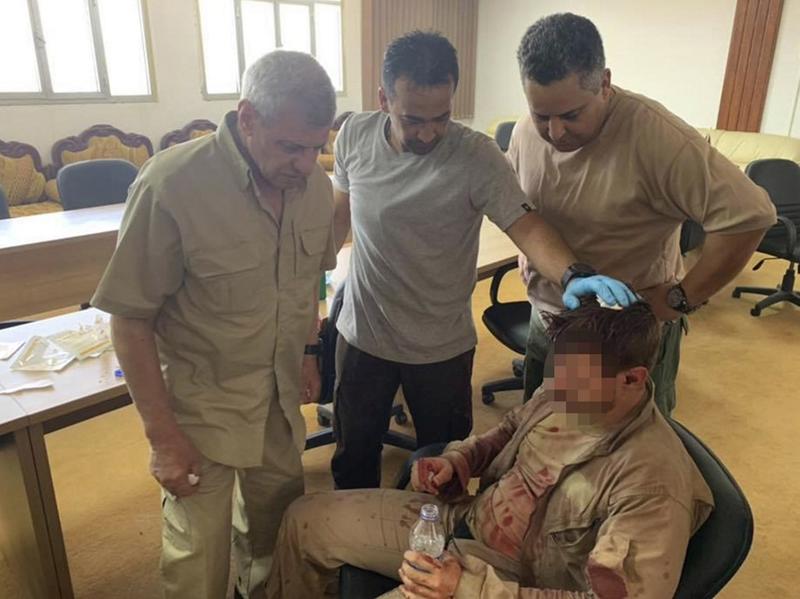 This May 7, 2019 photo shows a man, described as the foreign pilot of a Mirage F1 fighter jet that was allegedly shot down by troops loyal to LNA, in custody after being captured in Libya's al-Hira region. (LNA WAR INFORMATION DIVISION / AFP)

The LNA media unit released photographs of what it said was the pilot receiving medical treatment while seated on a chair. One showed an LNA commander, Abdulsalam al-Hassi, standing behind him.

Video posted on social media, which an LNA source said was authentic, showed the pilot, looking groggy and wearing a blood-soaked T-shirt and khaki jacket, being questioned in English.

Asked his name, he said what sounded to be Jimmy Rees but his answer was not clear. He gave his age as 29 and said he was “from Portugal”.

Asked what he was doing in Libya, he said: “I was requested to destroy roads and bridges”. Asked who sent him, he said it was a civilian contract with someone called Hadi but he did not know his full name.

In Lisbon, the Portuguese Defense Ministry and they could not confirm the pilot’s nationality.

“For now the only thing we can say is that he is not a Portuguese soldier,” a ministry spokeswoman told Reuters.

Reuters correspondents in Lisbon said the man did not sound Portuguese.

A spokesman for forces aligned with the internationally recognized government which is based in Tripoli had no immediate comment on the incident.

Residents of Gharyan, about 80 km south of Tripoli, said that when the plane was heard overhead, anti-aircraft fire opened up. There was an explosion as it was hit.

“The jet was shot down in Al-Hira town (10 km from Gharyan) and I saw LNA troops capturing the pilot,” a Gharyan resident told Reuters.

The eastern-based LNA, led by Haftar and backed principally by Egypt and the United Arab Emirates, began an offensive against Tripoli in early April but its advance has been blocked by forces loyal to Tripoli on the city’s southern outskirts.

The escalation is a setback for efforts by the United Nations and Western states to end the chaos and political division in Libya eight years after a NATO-backed uprising that toppled former leader Muammar Gaddafi.