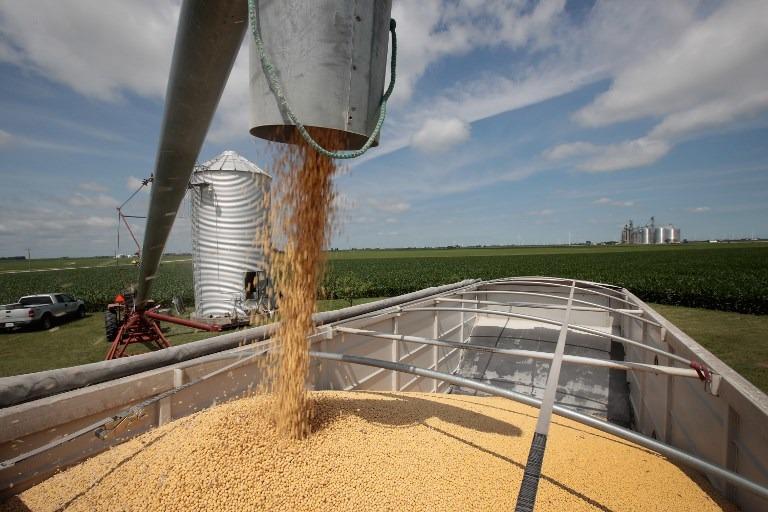 In this file photo taken on June 13, 2018, soybeans are loaded from a grain bin onto a truck before taking them to a grain elevator in Dwight, Illinois. (SCOTT OLSON / GETTY IMAGES NORTH AMERICA / AFP)

China is capable of coping with the reduction of soybean imports from the United States as it has many import channels from global markets such as Brazil and Argentina to ensure its grain security, said a government agency and grain traders.

China National Grain and Oils Information Center said China's 25 percent import tariff on US soybeans will increase US soybean import costs to between 700 yuan (US$105) and 800 yuan per metric ton, which is around 300 yuan higher per ton than the same shipments from Brazil.

The center, which is under the State Grain and Reserves Administration, analyses China's food supply and demand, and predicts future market changes.

It predicted that domestic companies would significantly cut purchases of US soybeans due to the loss of their competitive advantage after the implementation of additional tariffs.

China had not purchased US soybeans for three weeks by June 28, and canceled 615,000 metric tons of US soybean orders during this period, according to CNGOIC.

The center forecast that China's reduction in soybean imports from the US can be offset by Brazil's bumper soybean harvest, and the growing soybean production acreage in South America and Central Asia.

China had not purchased US soybeans for three weeks by June 28, and canceled 615,000 metric tons of US soybean orders during this period

Even though customs data show that China imported 32.85 million tons of soybeans from the US in 2017, experts said soybean oil and soybean meal are replaceable, thanks to the world's sufficient supplies.

Yu Xubo, president of COFCO Corp, China's biggest agricultural products supplier by revenue, said the nation can boost domestic soybean output, and broaden its sources of meat, soybeans and meal imports to ensure supply from other countries, while strengthening research on feed formula and cutting dependence on soybean meal demand to make up the import gap from the US.

"In the long run, the cultivated land resources in South America and the Black Sea region have great potential to enhance the global soybean supply chain," said Yu.

He said the group would further coordinate its international resources to ensure the nation's grain security as its business operations and assets mainly are located in Brazil, Argentina, the Black Sea region, Indonesia and other core grain and oil production areas.

China Grain Reserves Corp, the nation's largest and most wide-ranging grain storage and transportation company since 2013, said China has sufficient materials to produce edible oil and the company will increase its annual production capacity for edible oil from the current level of 6.5 million tons, as well as add more storage facilities nationwide.

READ MORE: Soybean group in US calls for trade sense

CNGOIC reported that the soybean planting area in the US reached 36.24 million hectares this year, the second-highest level in history, with the planting area exceeding that of corn for the first time in 40 years.

Ding Lixin, a researcher at the Chinese Academy of Agricultural Sciences in Beijing, said as output of US soybeans is expected to increase and export demand declines, US farmers will suffer significant losses as 85 percent of global soybean trade growth came from China over the past 20 years and the country's demand is still the main source for the growth of global soybean trade.