By Yu Yilei and Wang Mingjie in London 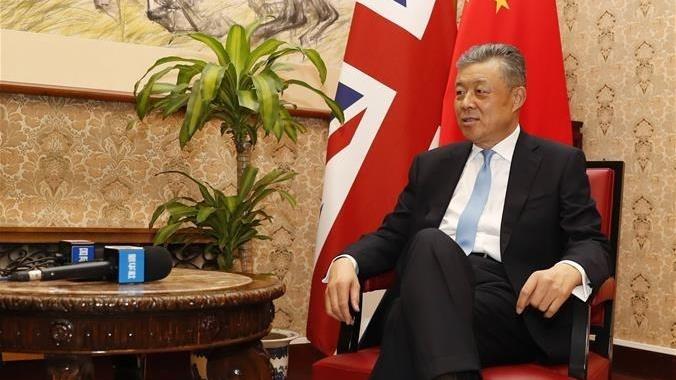 Chinese Ambassador to the UK Liu Xiaoming speaks during an interview with Chinese press in London, Britain, on Jan 23, 2018. (PHOTO / XINHUA)

Continuing on the road of reform and opening-up is the only way to ensure China's national rejuvenation and is a natural choice as the country grows richer and stronger, according to veteran diplomat Liu Xiaoming.

"The past 40 years have seen a historic leap in China's comprehensive national power and international status," said Liu, China's ambassador to the United Kingdom.

Liu said the Chinese people's relentless exploration and hard work to blaze a path of socialism with Chinese characteristics has been key to China's great achievements over the past 40 years.

As the nation transitions from high-speed growth to high-quality growth, its reform is entering the "deepwater zone", Liu said, adding that "the 'low-hanging fruit' is already picked and the more difficult problems are left for us to tackle on the road toward great national rejuvenation".

In the face of challenges to economic globalization and multilateral trade, President Xi Jinping reaffirmed China's commitment to opening-up and its support for the international trade regime in a speech at the 2018 Boao Forum for Asia in April.

Liu said signs of a new round of opening-up by China present greater opportunities for the world.

READ MORE: A shared future for the world benefits all nations

Since 2002, China has been the largest contributor to global economic growth. The country's economy grew by 6.8 percent in the first half of this year, and it has been growing at between 6.7 and 6.9 percent for 12 consecutive quarters.

"The steady growth of China's economy will provide strong impetus to the world economy and facilitate common development of other countries," Liu said.

"In November, China will host the first international import expo, a significant measure to welcome other countries to board the express train of China's fast growth and share its development benefits."

With the largest middle-income population in the world - some 400 million people - China is a huge market.

In the case of the auto industry, China is now the world's largest consumer market, with both production and sales leading the world for nine consecutive years.

On July 1, China cut tariffs on automobiles and other consumer goods, and Liu said this has helped meet growing demand for upgraded vehicles and opened markets for foreign businesses.

Other opportunities have also stemmed from the cooperation platforms initiated by China, such as the Belt and Road Initiative, he said. More than 100 countries and international organizations have signed cooperation documents with China, and more are joining in.

"Following the principles of 'extensive consultation, joint contribution and shared benefits', the BRI will give a further boost to mutually beneficial cooperation between China and the world," Liu said.

Yet China still faces challenges in its development, Liu said, adding that the nation needs to avoid problems resulting from rapid growth by replacing the old, high-waste growth model with high-quality development, as well as take prompt steps to tackle the dwindling demographic dividend.

In the face of barriers preventing further development, China must deepen reform on all fronts and strive to win the "three critical battles" against potential risk, poverty and pollution.

This year marks the 40th anniversary of China's reform and opening-up as well as the 45th year of Liu's diplomatic career.

"For over four decades, reform and opening-up has been a central line running through my entire diplomatic career," he said. "I have witnessed China's great journey of seeking win-win cooperation and common development with the world."

Liu has worked in Africa twice - in Egypt and in Zambia, where he attended the handover ceremony of the railway company Tazara, a monument to China-Africa friendship for its historic contribution to anti-imperialist and anti-colonial struggles.

Recalling his second tour of duty in the United States 20 years ago, he said, "China and the US were in negotiations on China's accession to the World Trade Organization and the situation was a far cry from the current trade dispute."

Despite tough negotiations back then, Liu said China displayed firm determination to further open up.

"When China joined the WTO in 2001, I was ambassador to Egypt and gave an interview to Le Progres Egyptien," he said, referring to the French-language newspaper in Cairo.

"I said that China's accession to the WTO had opened a huge market of 1.3 billion consumers for products and services to other members. It had also given competitive Chinese goods access to the global market."

In more than eight years as ambassador to the UK, Liu said he has been invited to more inauguration ceremonies involving Chinese companies than any other event, including the signing of the Hinkley Point C nuclear energy project agreement.