9 Chinese discharged, 12 still in hospital after US car crash 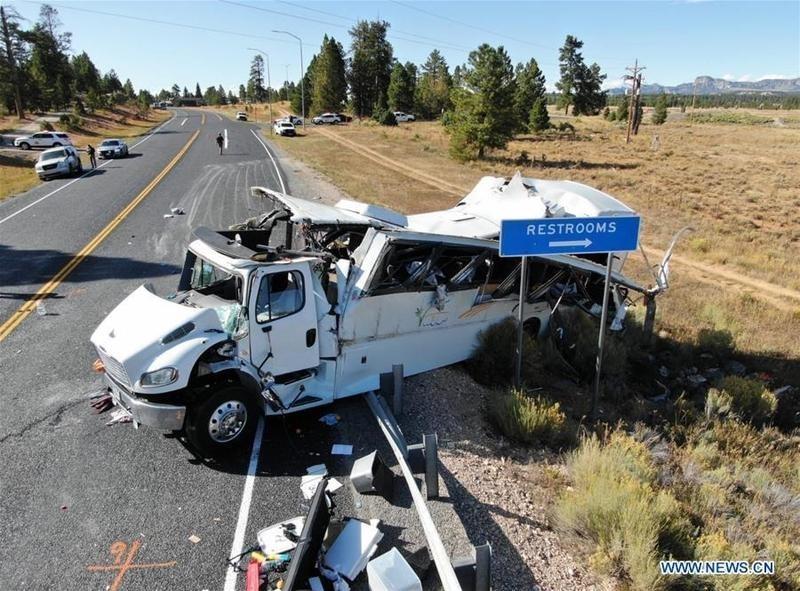 WASHINGTON — Nine Chinese nationals have been discharged and 12 others remain hospitalized on Monday after a tour bus rollover crash in a US national park in the state of Utah killed four and injured 26 others last week, according to a Chinese embassy official.

Of those still hospitalized, five people are being treated at intensive care units while the rest are in general wards, Minister Counselor Zhong Ruiming of the Chinese Embassy in the United States told Xinhua.

The crash occurred before Friday noon on the state road 12 (SR-12), about 5.6 km west of Bryce Canyon National Park in Utah, authorities said

Nine people have been discharged. Five others are staying at hospitals to take care of their injured family members, Zhong said.

The crash occurred before Friday noon on the state road 12 (SR-12), about 5.6 km west of Bryce Canyon National Park in Utah, authorities said.

The tour bus, carrying a total of 31 people including the driver, was eastbound on SR-12 heading towards Bryce Canyon before drifting off the road to the right.

The driver, a Chinese American, overcorrected to the left, causing the bus to roll over and slamming into a guardrail. The National Transportation Safety Board said Sunday that it was the driver's first trip.

The Chinese embassy sent a working group to Utah immediately after being alerted of the incident, according to Zhong.

While the group is working jointly with a group from China's Shanghai to deal with relevant matters, a travel agency is making arrangements to send the discharged and bodies of the deceased back to China and receiving victims' families who have traveled or plan to travel to the United States, Zhong said.

He also extended his gratitude on behalf of the Chinese embassy to local police and hospitals for their professional service and to local overseas Chinese, volunteers, teachers, and students for their assistance.