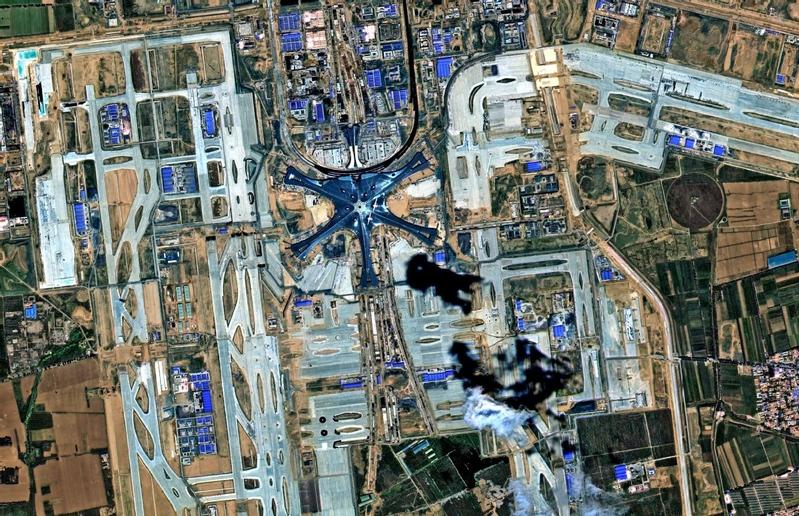 This undated photo shows a image of the new Beijing Daxing International Airport taken by a high-resolution camera on the Gaofen 6 satellite. (PHOTO / CHINA DAILY)

China put two Earth observation satellites into operation on Thursday after testing, saying they will assist in a wide range of public services including environmental protection, air-pollution mitigation, agricultural and forestry surveys and disaster relief.

The Gaofen 5 and 6 satellites are the latest additions to China's high-definition Earth observation satellite network. Their deployment will extensively improve the nation's capability to obtain ground images and data, thereby facilitating social, economic and environmental development, said Zhang Kejian, director of the China National Space Administration. He spoke at a ceremony at the administration's headquarters in Beijing on Thursday.

The two spacecraft just finished several months of trial runs in orbit. Designers verified the reliability of their equipment and concluded that they are now ready to go into service, according to project managers.

Gaofen 5 blasted off atop a Long March 4C carrier rocket on May 9 at Taiyuan Satellite Launch Center in Shanxi province. The satellite was developed and produced by the Shanghai Academy of Spaceflight Technology and is used mainly by the Ministry of Ecology and Environment, the Ministry of Natural Resources and China Meteorological Administration.

The satellite weighs 2.7 metric tons and carries six instruments－two for land observation and four to monitor the air. It is expected to operate in a sun-synchronous orbit for at least eight years.

Tong Xudong, chief designer of the Gaofen series at the space administration, said Gaofen 5 is the first China-developed satellite that can monitor air pollution. It has the highest spectral resolution among Chinese remote-sensing satellites. The satellite can detect the state of air pollution in China through observing pollutants, greenhouse gases and aerosols, and can also provide data to land resources survey and disaster prevention and relief efforts, he added.

Gaofen 5 will help to reduce the heavy reliance on data on air pollutants and greenhouse gases generated by foreign satellites, according to a statement from the Ministry of Ecology and Environment's satellite applications center.

Gaofen 6 was designed and built by the China Academy of Space Technology in Beijing and launched on June 2 atop a Long March 2D rocket at the Jiuquan Satellite Launch Center in northwestern China. Carrying a high-resolution camera, the satellite operates in a repeat sun-synchronous orbit with a designed life span of eight years.

The academy said Gaofen 6 is China's first satellite capable of performing high-precision agricultural monitoring. It has worked with Gaofen 1 in agricultural and forestry resources surveys as well as disaster prevention and mitigation, it noted.

China launched the Gaofen project in May 2010 and listed it as one of the 16 nationally important projects in science and technology. The program aims at forming a space-based, high-resolution Earth observation network by about 2020.

The first in the system, Gaofen 1, was sent into space from the Jiuquan Satellite Launch Center in April 2013. More than 10 Gaofen satellites have been launched and are in service.