Without working in a collective, female artists have seen flashing collective strokes to challenge stereotypes and inequality. Collaborative art across genres only amplifies the collective message to be heard. Wang Yuke reports from Hong Kong. 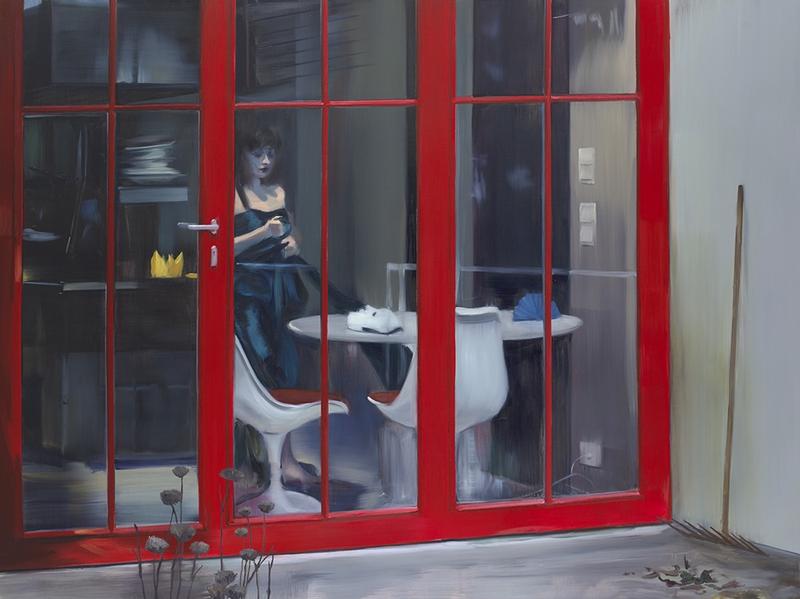 When it comes to the might of collective endeavors in challenging an unjust stereotype, questioning a deep-seated bias, or mending social ills, one needs look no further than arts and cultural events in Hong Kong, where artists from the same art field or across different disciplines tap into their distinct artistic licenses to communicate the same message.

It isn’t a stretch to say that female artists are the avant-garde in arts collectivism.

A cursory roam around a showroom featuring a cache of 20th century and contemporary artworks, and presented by Phillips — one of Hong Kong’s leading auction houses — could leave one with nothing, but the experience of color bombardment and bewilderment courted by surrealistic shapes and abrasive compositions. A revelation would follow a mindful examination — many female artists, coincidently, employ their art to convey a similar mojo that celebrates women’s physical, mental and social freedom. Putting it into a historical context, however, it may not be a coincidence, since women have collectively been subjected to inequality. They’re now collectively throwing the vestige of stereotypes out of the window. 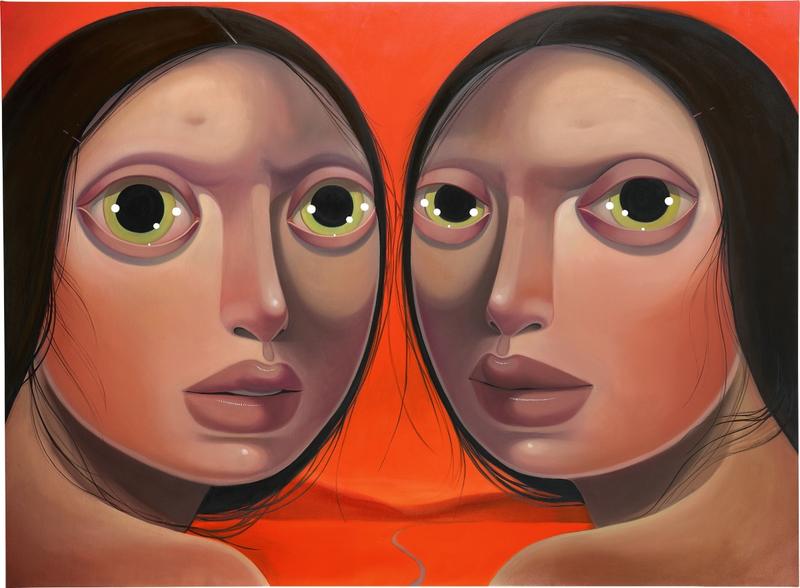 In Phillips’ 20th Century & Contemporary Art Evening and Day sales, a cluster of women artists make use of their hard-earned attention and prestige to counter the female objectification undercurrent, voice discontent about gender inequality, and seek emancipation from the male gaze. Take Polish artist Ewa Juszkiewicz’s works for example. “When a woman is seated as an object of a portrait, her pleasing look is expected. But this is completely overthrown, erased, in fact and replaced by organic matters (commonly flora and fauna) in Juszkiewicz’s works,” says Derek Collins, senior consultant to the Chairman’s Office, Asia, at Phillips.

“Another prominent feature of some art at this sale is to present women staring directly at the viewer, like in the case of Tania Marmolejo, or many of the West African artists, to force the viewer into a kind of acknowledgment or empathy,” explains Collins. Two Sides by Marmolejo, which was sold for HK$504,000 ($64,770), commands a somewhat eerie, but riveting pull-and-push effect, where two look-alike girls uniformly stare at the viewers, their oversized eyes inviting a direct soul dialogue with the audience without any reservation, ambiguity or meekness. 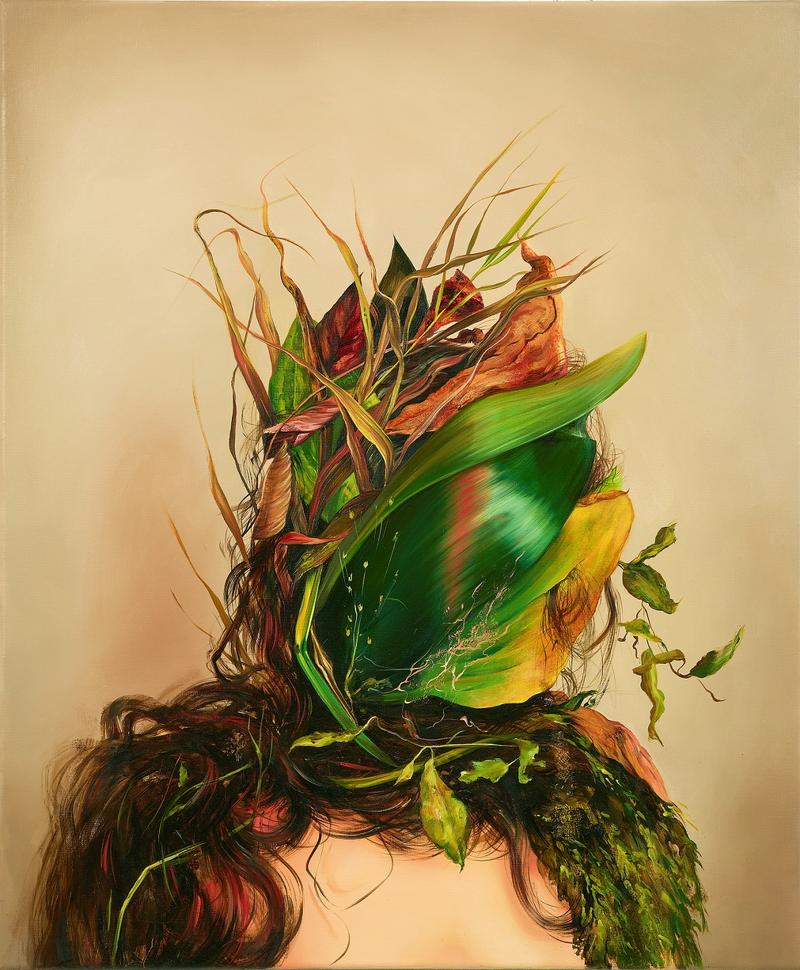 Young female artist Caroline Walker makes women’s social, cultural and economic importance the focal point in her cinematic paintings. Her piece, The Masquerade, which sold for about HK$3.9 million, lends itself as a window, literally and metaphorically, into women’s overlooked or unpaid labor and contributions to societies.

Many of the fine works in Phillips’ sales in Hong Kong are also addressing queer issues, hitting the nail on the head in women objectification. “Christina Quarles comes to mind because she’s interested in queer bodies and in tactile sensation, not just visual, and depicts her feminine figures as touching and, sometimes, noticeably in profile or with closed eyes, or looking anywhere, except at the viewer,” explains Collins. “The body, sometimes, represents the complexity of identity,” which is the kernel of the argument these female artists are trying to broach. “Some women artists in this sale depict an enlarged, somewhat grotesque female fleshiness,” says Collins, to turn the conventional expectations of female beauty upside down. The deformation and distortions of body parts, a signature in Swiss-born artist Louise Bonnet’s absurdist figurative paintings, shouts aloud the protest against society’s expectations of a visually appealing female body. Her latest collection of works, aptly named Onslaught, was showcased in May this year at the Gagosian gallery in Hong Kong — her first solo exhibition in Asia. 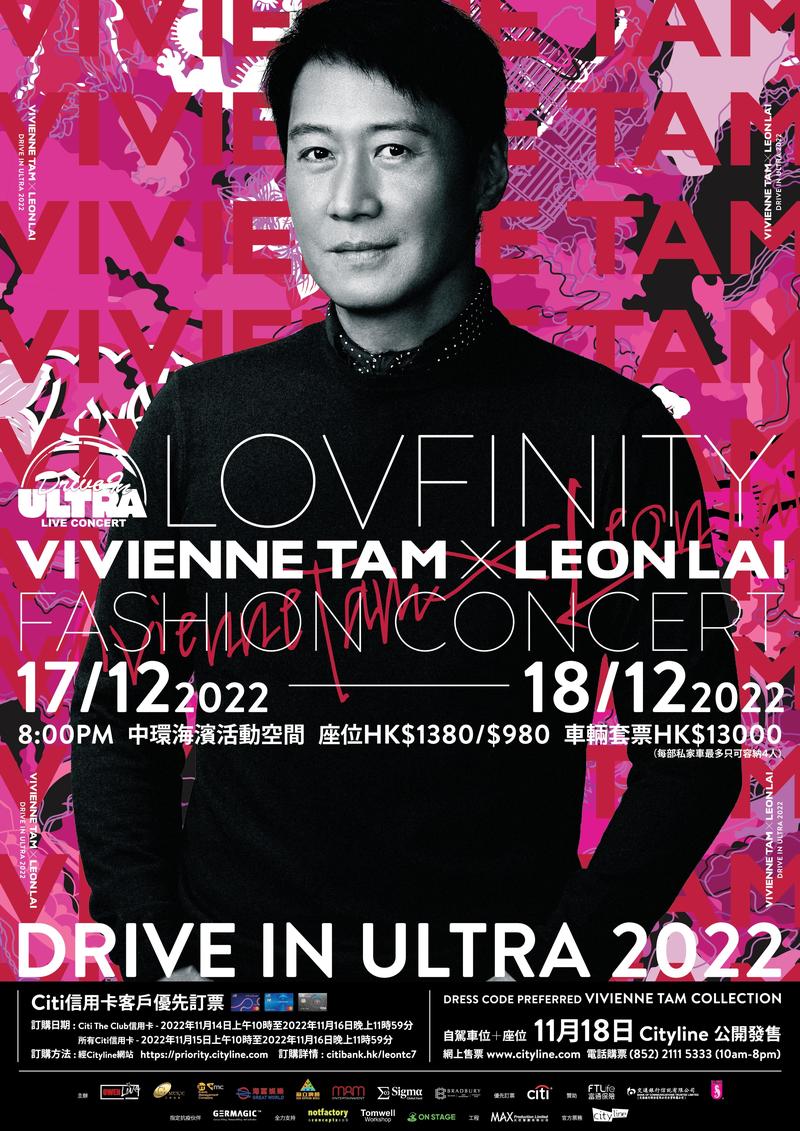 These are just the tip of the iceberg, illuminating the artistic flair and articulateness of women artists around the world in collectively calling for an egalitarian future. “There’re many, many more (examples) of conveying something of the complexity, variety and creative variation in women’s art today,” says Collins.

Arts collectivism is not wholesome new as arts from history to present what have been resorted to by artists as a tempered and less aggressive response to, and “as an intervention or a corrective to specific social injustice”, opines Collins, who is also the dean of the Faculty of Arts at the University of Hong Kong.

“This injustice could be an actual discrimination, based on a legal, racial, gender, class or other basis or some combination of these.” In other words, grievances toward social injustice breed collectivism in the art field even though they may not really work collectively. 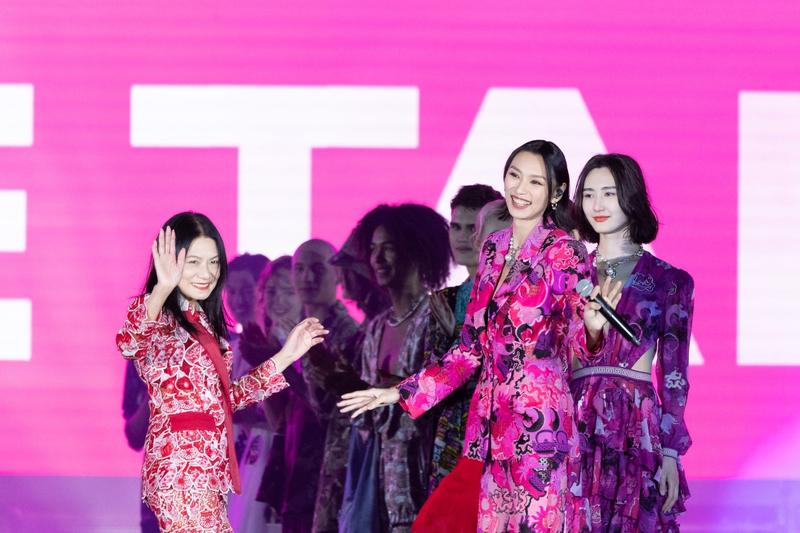 Collective arts can also be interdisciplinary. Taking to diverse artistic languages spanning different genres of art could deliver a more powerful and provocative punch, reinforcing a message or simply amplifying an artistic feat without much gravitas.

When music meets fashion design, the collective spark can be mind-blowing. It’s beneath the surface —music to the ears and candy to the eyes — but pumps out wellness, vitality and positivity. “I want to celebrate the past, present and the future with creativity and innovations, delivering the positive energy of Lovfinity (love + infinity),” says Tam.

The impeccable marriage of music and fashion complemented each other aesthetically and aurally, says Tam. “It definitely created a more powerful impact for both of our works, relaying the shared concepts (that we’re keen to express) with a more holistic experience to the audience.” 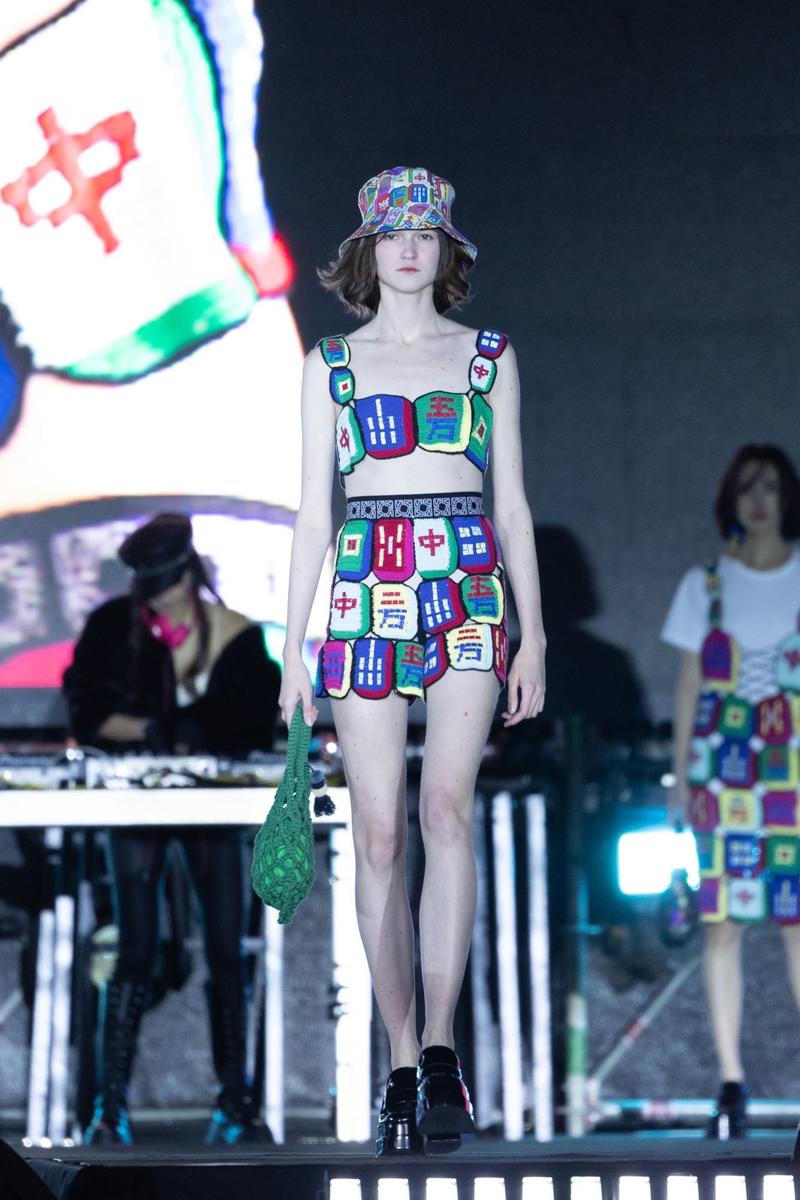 Collaborative work that absorbs the most envelope-pushing components from various fields gives birth to free-wheeling and unbridled artistic possibilities. Technology has become integral to Tam’s design, and an infallible crutch for her design to hit a crescendo. “I’m always looking for different creative ways in presenting my fashion, something extraordinary, such as having a female NASA astronaut to announce the show begin for my SS2017 ‘Houston’ Collection, or walking onto the runway with the Wuba mascot from animated blockbuster Monster Hunt 2 at my show finale at New York Fashion Week. And I love crossovers, embracing all the creativities and possibilities of merging the minds from different disciplines,” says Tam.

Pantone Room, a custom-designed space displaying a curated selection of fine art, functional furniture and conceptual works from Phillips’ 20th Century & Contemporary Art Day Sale, also illustrates how different art genres can collectively make their fair share of contributions to perpetuate a common thread. Carpeted with golden fallen leaves, adorned with wooden walls, panels and partitions, and complete with antique tables and vintage upholstered chairs, as well as contemporary paintings injecting a colorful touch to the palette, the whole room emanates a soothing zest that belongs exclusively to autumn. Behind the curation is Victoria Tang-Owen, founder and creative director of Victoria Tang Studio and Thirty30 Creative, who hand-picked the art pieces with the color of autumn nectar, Pantone 130 C, in mind. Those different art forms, with nuanced texture and color schemes, blend together, collectively transporting the viewers on an autumn-imbued journey. 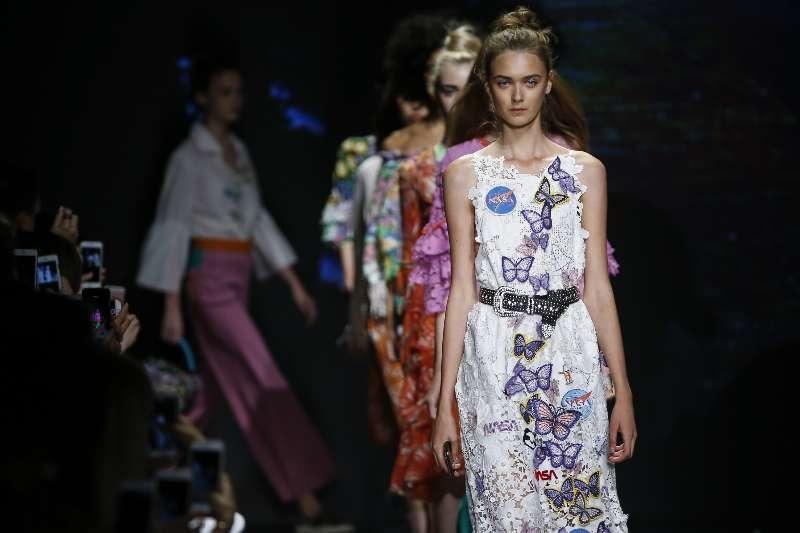 “The theme is centered on the idea of an autumn walk and experiencing nature’s bounties. On a walk in autumn, you will see a mixture of colors, nature in various forms. In the same vein, the room is filled with furniture, paintings and sculptures,” says Tang-Owen. “I tried to inject richness into variety, mixing the old and the new, with an element of surprise.”

Tang-Owen is no stranger to collaborative art creation. Last year, she was commissioned by The Upper House to create a bespoke Christmas tree. “I challenged the traditional use of a Chinese screen as a room divider to create a deconstructed tree that is inclusive and embracing. The delicate organza is embellished with motifs of pine, pinecones and golden baubles in Pan Jin Xiu, a 2,000-year-old craft exclusively used for the Emperor’s Dragon Robe,” she recounts. 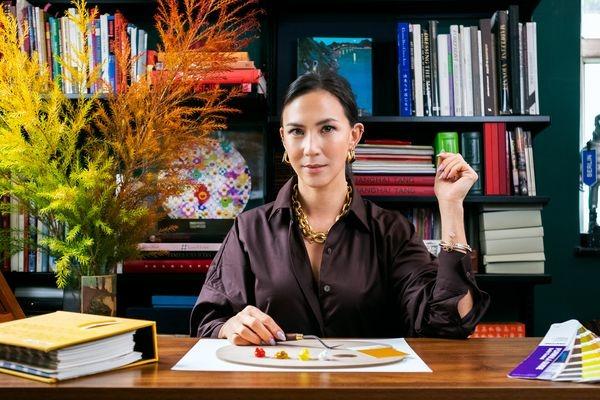 Without the slightest doubt, collectivism is a boon for like-minded artists who’re yearning to articulate their raw emotions and stances — be it contentious, defensive, rebellious or aggressive — through arts. But, does it mean collectivism is the Holy Grail of the art sphere? The answer is negative. Excessive accentuation on collective endeavor could eclipse each artist’s individuality and signature artistic license, which are equally important, argues Collins.

Take the collective commitment by similar-minded women artists to eliciting the public contemplation and reappraisal of women’s roles, identity and merits beyond exterior beauty. Their approach or “painting brush” to the canvas varies, contends Collins. Their ethos alluded to in their artworks are aligned, “but they’re done with a great degree of variation”, he notes.

Social media, in some way, encourage the collective culture in a globalized and interactive contemporary art world, reckons Collins. “Global interconnectedness means artists are easily able to see each other’s work and share ideas. It’s exciting to see so much exchange, but it also ends up with artists exploring similar themes more often than they would otherwise.” 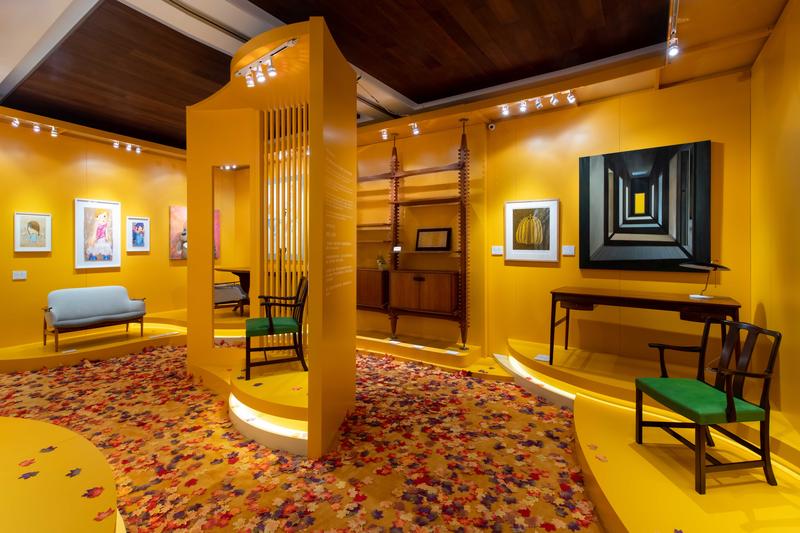 Then, there’s market demand — what sells best, what are most endearing to art collectors, what are coveted as home decorations? “The market always impacts the kind of work artists make because they’ve to earn a living. But, artists always have a choice to work with or against the collective trend to express their individuality.”

“There’s no question that to be noticed, an artist has to be unique, but then that uniqueness can make the artist a prisoner of their own market,” caveats Collins.

Whether collectivism in arts provides an empowering cocoon, where the creative find expressive solidarity, or sets a dangerous trap cocooning creative individuals from minting their artistic dialect can be a tough balance to strike. However, it’s probably this fuzzy distinction that makes arts per se fascinating.