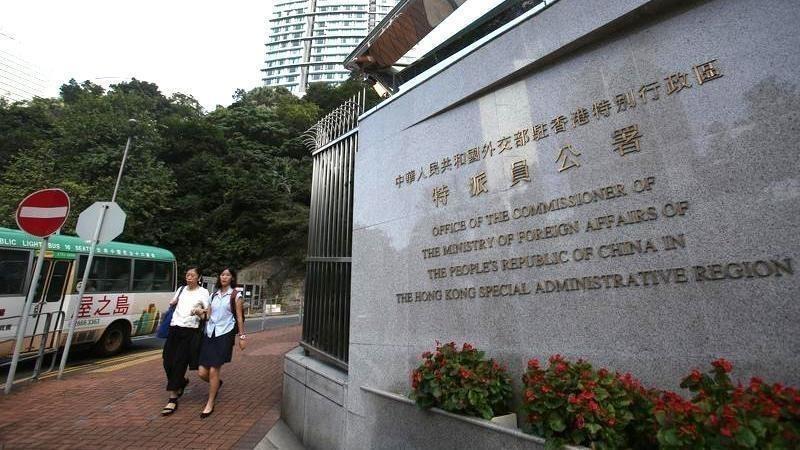 This Nov 17, 2016 photo shows the Office of the Commissioner of the Ministry of Foreign Affairs of the People's Republic of China in the Hong Kong Special Administrative Region in Central, Hong Kong. (PARKER ZHENG / CHINA DAILY)

HONG KONG - The Office of the Commissioner of the Chinese Foreign Ministry in the Hong Kong Special Administrative Region firmly rejected on Sunday the irresponsible comments of a spokesperson of the US State Department and a few US congressmen on an HKSAR court’s law-based ruling against former media tycoon Jimmy Lai Chee-ying.

The office also strongly disapproved of their remarks about the human rights and the rule of law situation in Hong Kong, a spokesperson said in a statement.

The trial by the SAR court is totally legitimate and lawful and it brooks no interference or reproach, the spokesperson said

“We urge external forces to refrain from interfering in the judiciary of the SAR and in any other Hong Kong affairs and China’s internal affairs under the pretext of human rights,” the statement reads.

Lai, founder of the now-defunct Apple Daily newspaper, was sentenced on Saturday to five years and nine months’ imprisonment and fined HK$2 million ($256,000) over two fraud charges linked to violation of lease conditions.

The spokesperson said that the rule of law is a cornerstone of Hong Kong’s prosperity and stability, and Hong Kong residents’ lawful rights and freedoms of speech, press and association are all fully protected.

However, rights and freedoms must not be an excuse for criminal acts, an “immunity passport” for law-breakers, or a privilege for anti-China forces in Hong Kong. No one is above the law no matter what their background is or what forces are behind them.

In Lai’s fraud case, the evidence is clear, the procedure is law-based, and the judgment is open and transparent. The trial by the SAR court is totally legitimate and lawful and it brooks no interference or reproach, the spokesperson said.

The spokesperson pointed out that the Lai case is an ordinary criminal case, but the US waded into it and accused the central government and the HKSAR government of “not respecting the freedom of the press” just because the case involves an anti-China criminal, which only makes the whole world see clearly the identity of Lai as an “agent” and a “pawn” of the US.

The US often claims to stand up for fairness, justice and the rule of law, but it repeatedly sugarcoats criminals as “human rights pioneers”, smears the fair trial of HKSAR courts, and supports anti-China forces in Hong Kong, the spokesperson said.

In doing so, the US is putting political manipulation over the laws of the SAR, and using human rights as a tool for political stunt and interests export. It is in no position to call itself a defender of human rights, the spokesperson added.

The spokesperson stressed that Hong Kong is part of China and Hong Kong affairs are purely China’s internal affairs.

No slander of external forces can stop Hong Kong’s transformation from chaos to stability and prosperity, damage the bright prospects of Hong Kong’s development, or impede the great rejuvenation of the Chinese nation, the spokesperson said.

“We also urge them to immediately stop their futile efforts to whitewash criminals, stop vilifying Hong Kong’s human rights and the rule of law, and withdraw their ‘black hands’ that interfere in Hong Kong affairs and China’s internal affairs,” the statement reads.