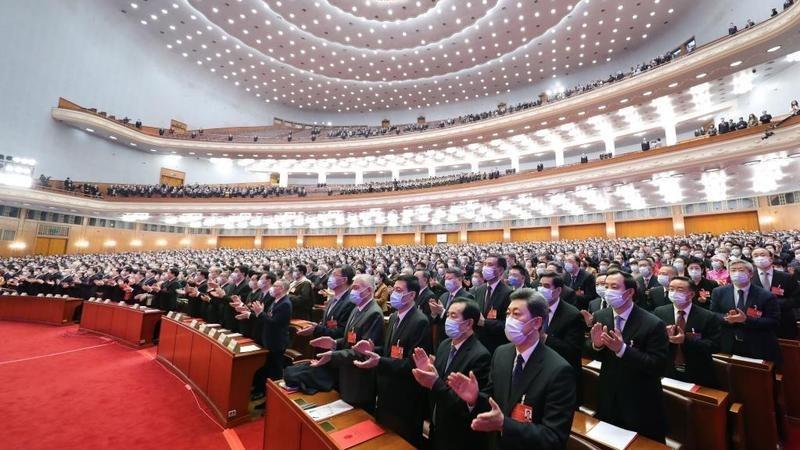 The closing meeting of the fifth session of the 13th National People's Congress is held at the Great Hall of the People in Beijing, China, March 11, 2022. (PHOTO / XINHUA)

SHENZHEN – Fifteen candidates have been confirmed qualified to run for election as Macao Special Administrative Region’s deputies to the nation’s top legislature.

The election is scheduled to take place on Dec 12.

The candidates were approved at the second presidium meeting of the Conference for Electing Deputies of the Macao SAR to the 14th National People’s Congress on Wednesday.

During the meeting, the 11-member presidium, chaired by Macao Chief Executive Ho Iat-seng, reviewed the nomination forms submitted by 16 applicants within the specified nomination period, which ran from Nov 22 to Nov 28.

Fifteen of the applicants met the candidacy requirements, which included getting nominations from at least 15 electoral conference members. The presidium determined that they are qualified to run in the election.

Among the 15 candidates, nine are current Macao NPC deputies. Others include members of the National Committee of the Chinese People’s Political Consultative Conference as well as leaders in other sectors.

All 517 members of the electoral conference will cast their ballots to elect 12 new Macao SAR deputies to the 14th National People’s Congress on Dec 12. Each deputy will serve a five-year term starting in 2023 in the country’s top legislature.

On Nov 19, the Macao electoral conference elected 11 members to the presidium to preside over the election process. On the same day, the presidium set the dates for the nomination period and for voting in the upcoming NPC deputy election.

On Nov 21, Hong Kong’s NPC election conference agreed that the special administrative region will elect 36 deputies to the 14th NPC on Dec 15, with the nomination period lasting from Nov 23-30.

Other members include Leung Chun-ying, vice-chairman of the National Committee of the Chinese People’s Political Consultative Conference, and Tam Yiu-chung, a member of the National People’s Congress Standing Committee.