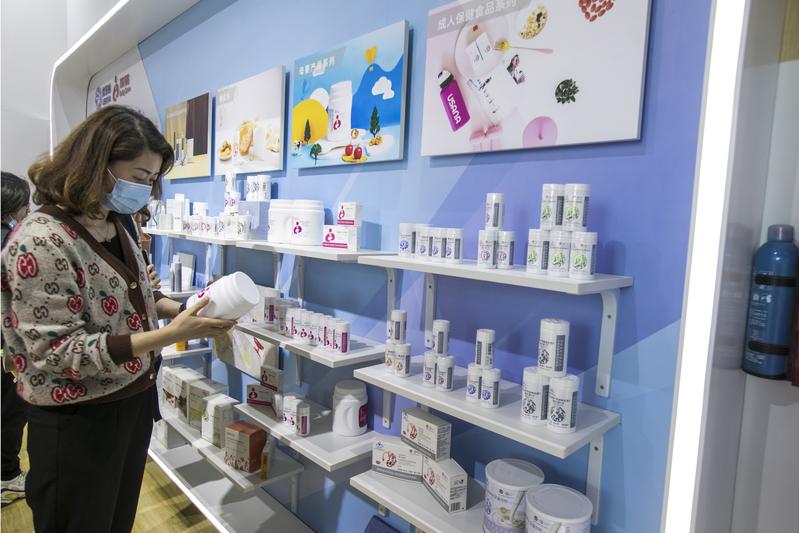 A visitor views items from US-based global nutritional product company USANA at the nutrition and health products exhibition hall during the 84th PharmChina, a national trade fair for medical products, in Shanghai in May 2021. (PHOTO PROVIDED TO CHINA DAILY)

Foreign companies are determined to invest more in China and further tap the potential of its super-sized market, as the world's second-largest economy has stepped up efforts to share its development dividends with foreign investors, according to business leaders.

Brent Neidig, chief officer of USANA and managing director of USANA China, said the company is deeply impressed by China's support of foreign enterprise development in the country, as well as its adherence to the opening-up policy, and will continue to invest "vigorously" in the country to make more contributions to the national agenda of safeguarding people's health.

USANA is a US-based global nutritional product company established in 1992 that operates in 24 economies. China, which it entered in 2010, has already become the company's largest market, contributing to nearly 50 percent of its annual sales.

"As China advances its Healthy China 2030 initiative, and under the influence of ongoing consumption upgrades, Chinese customers are becoming more aware of healthy lifestyles to expand their demand for health products," said Sun Lei, executive director of sales operations and business development of the USANA BabyCare.

"The huge potential of the Chinese market has encouraged us to continuously innovate and introduce more products and services for Chinese customers," Sun said.

The company has built a new factory of around 30,000 square meters in the Yizhuang economic technological development zone in southern Beijing.

Thanks to supportive government policies, complete industrial chain facilities and adequate talent in the area, the factory is expected to become a major innovation and production hub for the company, with an annual production capacity of up to 12 billion yuan ($1.68 billion).

Sun said since entering China in 2010, the company has witnessed and benefited from the development opportunities the country has created for foreign investors.

"The stable growth of the Chinese economy and continuous improvement in people's livelihoods promise us a huge market of even greater potential in the future," Sun said.

"China's support of free trade and its proactive opening-up of its market still wider to the rest of the world also boost the company's confidence to further develop here," he added.

Sun said the company will intensify efforts on digitalization, innovation and collaboration with local partners to further tap the potential of the Chinese market.

Alexandre Moreau, president of the China branch of Belgium-based biopharmaceutical company UCB, said the company has transformed its portfolio in China to reflect its focus on innovation as China is one of the most important markets for UCB globally.

"The implementation of the Healthy China 2030 strategy has reinforced our confidence in this market. We would like to further promote innovation and improve patient access to novel solutions," Moreau said.

The company and China Association against Epilepsy announced a reinforced partnership at the fifth CIIE, which includes the launch of a training program called "The Epilepsy Academy-Beidou Program "for better developing talent and improving the overall proficiency of epilepsy diagnosis and treatment in China.

"UCB will continue to strengthen our portfolio in neurology, expand our innovative pipeline in immunology, and provide solutions for rare neurological and immunological diseases for which treatments are currently very limited," said Wu Xin, UCB China's general manager.

"Beyond product innovation, we also aim to innovate in terms of new business models, digital transformation and industry-university-research cooperation to generate world-class innovations in China, for China, and the world," he said.

Experts also said as China accelerates the establishment of the new dual-circulation development pattern, which takes the domestic market as the mainstay while letting domestic and foreign markets reinforce each other, it will create more development opportunities for foreign enterprises.

"China's deepening reform and opening-up will unleash new growth momentum in the world's second-largest economy," said Liu Ying, a researcher at the Chongyang Institute for Financial Studies at Renmin University of China.