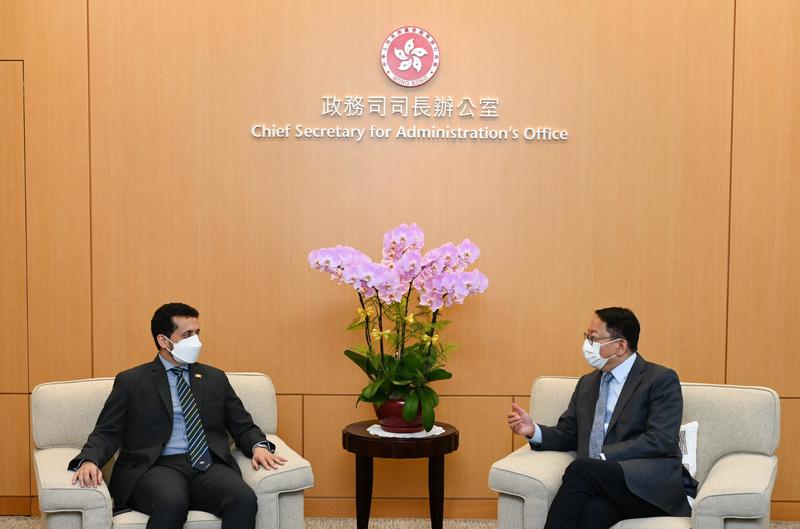 HONG KONG - Hong Kong Chief Secretary for Administration Chan Kwok-ki met on Tuesday with the Asia Rugby president as new guidelines were promulgated to prevent a repeat of a separatism-related song being presented as the Chinese national anthem at sports events.

Chan met with President of Asia Rugby Qais Abdulla Al Dhalai, who flew in from Dubai and explained in person the playing of the controversial song at the final between Hong Kong and South Korea during the Asia Rugby Sevens Series' second leg held in Incheon, South Korea on Nov 13.

Chan reiterated at the meeting that the HKSAR government strongly deplored and opposed the incident, and that, as the tournament's lead organizer, Asia Rugby is responsible for ensuring the national anthems of all participating teams receive the rightful respect warranted

“(Qais) totally agreed that the national anthem is the symbol and sign of a nation and must be respected on all occasions, hence his apology extended in person to the government and people of the HKSAR, and undertook to ensure no similar mistake will happen again,” reads a statement issued by the Hong Kong Special Administrative Region government.

Chan reiterated at the meeting that the HKSAR government strongly deplored and opposed the incident, and that, as the tournament's lead organizer, Asia Rugby is responsible for ensuring the national anthems of all participating teams receive the rightful respect warranted.

Hong Kong police are investigating as two previous similar cases have since surfaced.  Online video clips posted on a popular sports streaming channel of two Rugby World Cup qualifier matches, one against Portugal in Dubai on Nov 6 and another on July 23 against Tonga, labeled on screen the Chinese national anthem, Yiyongjun Jinxingqu (March of the Volunteers), not by its correct name, but with the name of the separatism-related song.

Asia Rugby undertook that they will confirm with all participating teams for future tournaments the national anthems concerned, which will be stored in a centralized archive, according to the statement.

All the local organizers of the tournaments are required to obtain the national anthems from the archive and not allowed to use any other version, it added.

Chan urged Asia Rugby to steadfastly implement all necessary remedial measures, and firmly reminded Asia Rugby that there is absolutely no room for any mistake in all future tournaments to be participated by the Hong Kong Rugby Team, including the Asia Rugby Sevens Series' third leg to be held in Dubai in late November.

Guidelines were promulgated on Tuesday for all "national sports associations" and all sports organizations subvented by the HKSAR government, according to the statement.

The new rules clearly set out how these groups should ensure the correct use and description by overseas events' organizers of the National Anthem of the People’s Republic of China and the Regional Flag of the HKSAR.

The guidelines also require them to proactively approach their respective international and Asian sports federations to ensure that the National Anthem and Regional Flag receive the rightful respect warranted and prevent any similar mistake from happening again.

Briefings will be conducted this week to explain in detail the contents of the guidelines to these sports organizations, according to the statement.