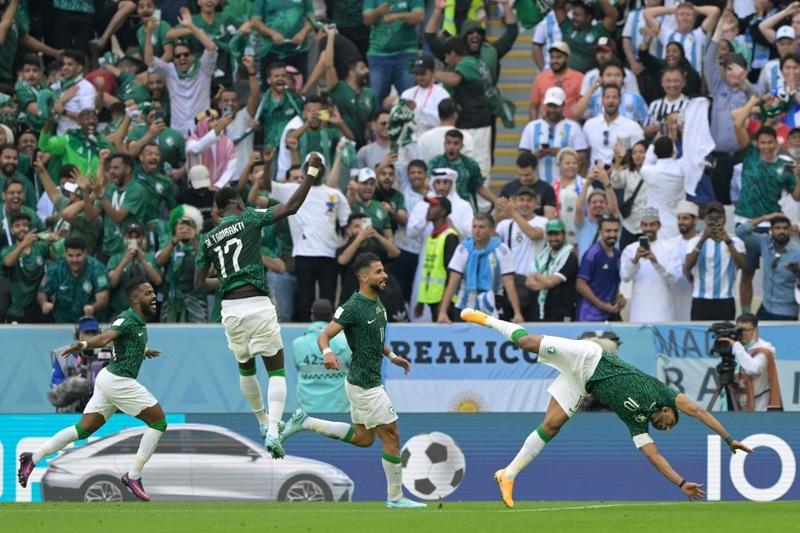 LUSAIL, Qatar- Unheralded Saudi Arabia notched one of the biggest shocks in World Cup history on Tuesday with a 2-1 win over Lionel Messi's Argentina thanks to a scintillating second half comeback.

On his fifth and final quest for the only major trophy to elude him, the 35-year-old Messi scored a 10th minute penalty in a dominant first half display where he and Lautaro Martinez also had three goals disallowed for offside.

On his fifth and final quest for the only major trophy to elude him, the 35-year-old Messi scored a 10th minute penalty in a dominant first half display where he and Lautaro Martinez also had three goals disallowed for offside

But Saudi Arabia, the second-lowest ranked team in the tournament after Ghana, threw caution to the wind at the start of the second half, charging at Argentina's defence in front of a frenzied 88,012 crowd.

First, Saleh Al-Shehri squeezed in a low shot in the 48th minute. Then, to the disbelief of even the Saudi fans, Salem Al-Dawsari curled in a scorching strike from the edge of the penalty area in the 53rd minute to leave Argentina and Messi looking utterly shell-shocked in the Group C opener.

Despite plenty of possession after that, Argentina could not penetrate the Green Falcons, who were competing in their sixth World Cup but had never previously won an opening game.

The entire game was played in an extraordinary atmosphere at the Lusail Stadium, with Argentina's traditionally massive and raucous following matched by the thousands of Saudis who had come over the border to cheer on their team.

READ MORE: Messi does light training away from Argentina team

"Our team fulfils our dreams!" and "Where is Messi? We beat him!", the green-clad Saudis chanted over and over in the Lusail Stadium, on their feet and greeting every clearance - including one headed off the goal line - with a deafening roar.

Both teams have Mexico and Poland to come, with Argentina needing an immediate reaction if Messi is to have a realistic chance of matching Diego Maradona's immortality in his homeland by bringing home the World Cup.

The result revived old question marks over Argentina's defence and broke their amazing 36-match undefeated run. That stopped them from matching the previous international record of 37 games unbeaten held by Italy. 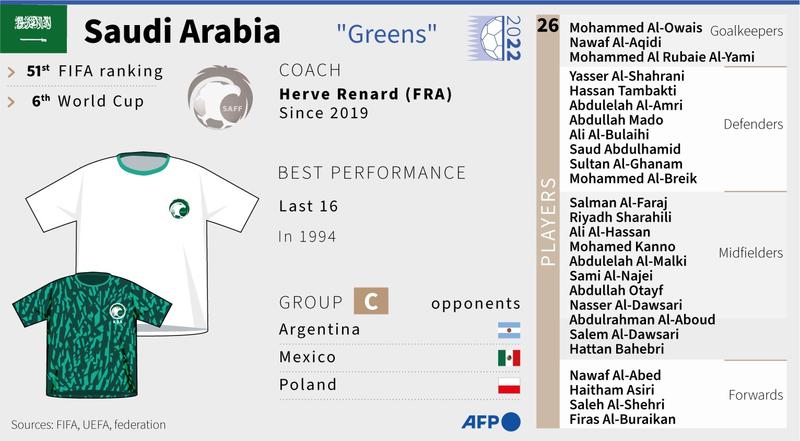 This AFP graphic dated Nov 18, 2022 shows the details of Saudi Arabia's football team participating in the 2022 World Cup in Doha

It also marred Messi's achievement on Tuesday of becoming the first Argentinian to score in four World Cups on his 20th appearance in the tournament. Only Maradona has played more games for Argentina at the World Cup, 21 in all.

"This hurts a lot. We were dreaming of starting the World Cup with a win," said Messi's strike partner Martinez. "But it's happened and now we have to train and think forward.

"We lost this game because of our own mistakes, most of all in the second half. There are details that make a difference and we need to correct our mistakes."

It had all looked so different at the start when the marauding Messi nearly scored in the opening seconds, celebrated joyfully after sending Saudi goalkeeper Mohammed Al-Owais the wrong way with his penalty, then had another goal disallowed.

For the Saudis, the result buried their dismal history at the start of tournaments, including a 5-0 thrashing by hosts Russia in 2018 and an 8-0 pummelling by Germany in 2002. 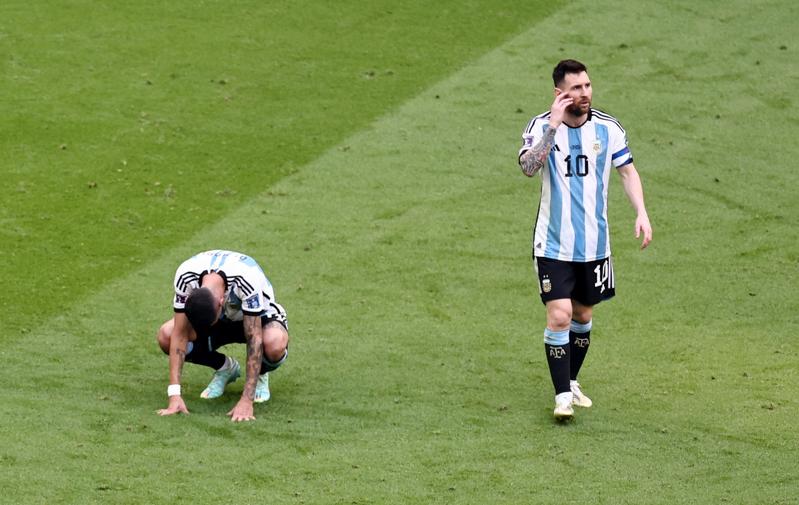 Their feat against the twice World Cup-winners and current South American champions was all the more remarkable given the departure of their influential captain and midfielder Salman Al Faraj just after halftime, clutching a hamstring.

Midfielder Abdulelah Al-Malki said the Saudis were fired up like never before by their coach Herve Renard.

"Renard made us cry with the motivation before the match and stoked us up during halftime," he said, affectionately calling the Frenchman "crazy".

Argentina's last defeat was by Brazil in the semi-finals of the Copa America in July 2019. They are ranked third, 48 places above Saudi Arabia, by world football's governing body FIFA.

Argentina's last defeat in their opening match at a World Cup was against Cameroon in 1990. In potentially a good omen for Messi and his team mates, they still made it to the final then.

The Saudis could hardly contain themselves after their giant-killing act, falling to the floor in prayers and tears before running to celebrate with their fans as the Argentinians trudged off downcast, their supporters shaking heads in silence.