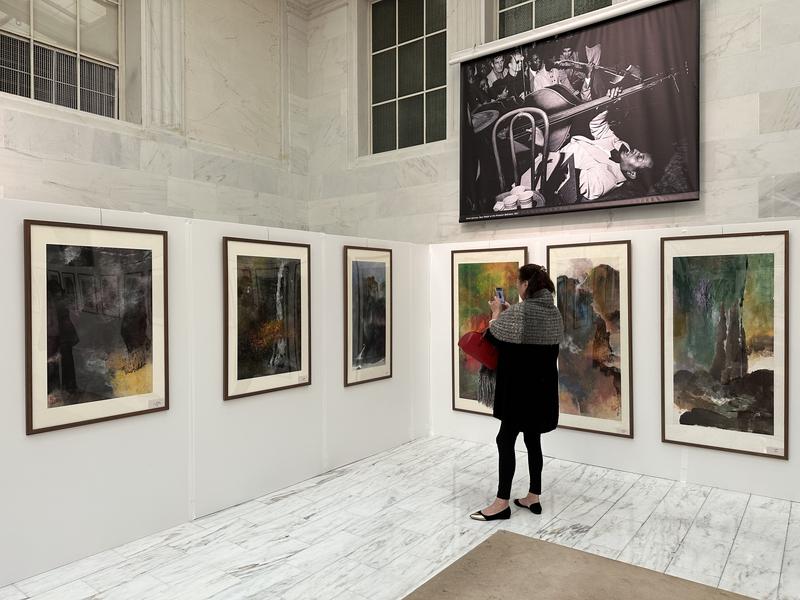 Black and white mountains and rocks shrouded in colorful mist — the fusion of Chinese and Western painting styles attracts Michela Millstein at an art exhibition in San Francisco.

"I think there are a lot of meanings behind it (the paintings). You can tell that it's trying to show cultural things and not just a picture," the visitor says.

"In my class, we celebrate Chinese holidays, and I think it's very global. And it would help me later in life," she says. "I really like it. It's a little hard, but I think it's worth it."

San Francisco Mayor London Breed proclaimed Nov 6 "Arthur Ku Day" in recognition of his contribution, and the exhibition was held to celebrate it.

"Arthur Ku is a renowned painter, calligrapher, and artist; his endless dedication and devotion to the art community has undoubtedly contributed to the vitality of San Francisco," the mayor said in the proclamation.

Ku was born in Guangdong province in 1941 and moved to Taiwan with his father in 1945. He then migrated abroad, settling down in the United States in 1977, where he began a career in media-related work that lasted more than two decades. Upon his retirement, he returned to art, juxtaposing Chinese art elements with Western-style painting.

He has been exploring the "splash ink and color" style, which is a technique of working with splashy, colorful washes to create an abstract, expressive style. The style was not dominant in Chinese art history until the emergence of Chinese painting master Zhang Daqian (1899-1983). 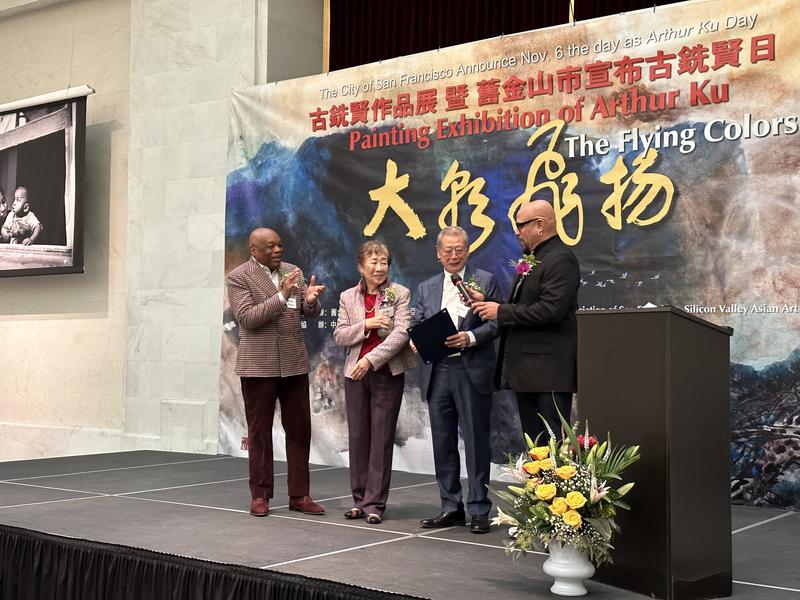 Ku's artistic talent and improvisation in traditional Chinese brush and ink painting inspired a unique style of down-to-earth and creative freedom, which paved a critical foray of traditional Chinese brush painting into modern and contemporary art, according to Breed's statement. "In his current roles as the honorary president of San Francisco Chinese Art Association, honorary president of the China Painting Association, and adviser for the North American Painting Gallery, his work has made a lasting impact for generations to come," Breeds writes.

Ku is also keen to promote cultural and artistic exchanges between China and the US to enhance art and friendship. He has successfully held several joint painting exhibitions in the US for artists from China.

Ku has led or founded several associations, including the Alliance for China's Peaceful Reunification on the West Coast and the Alumni Association of the Huangpu Military Academy in the US.

"Ku is deeply rooted in Chinese tradition. He has a very solid command of the Chinese way of painting. At the same time, he has also benefited from the exposure to Western culture," said Chinese Consul General in San Francisco Zhang Jianmin at the ceremony.

"Through these works, you can see the strength and benefits from both the Chinese tradition and the oil paintings. I think such exchanges and combinations are meaningful.

"I think inclusiveness brings unity and diversity brings vitality. We are now living in the most challenging times. ... So, I think it's important for us to embrace more inclusiveness and diversity, to have more cultural dialogue, so that we can communicate better and respect each other more."