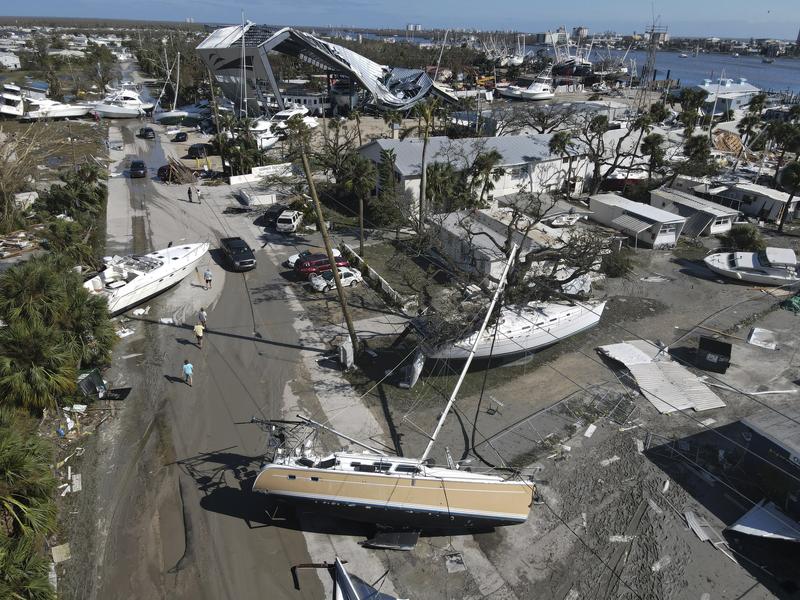 In this photo taken by a drone, boats lie scattered amid mobile homes after the passage of Hurricane Ian, on San Carlos Island, in Fort Myers Beach, Florida, Sept 29, 2022. (REBECCA BLACKWELL / AP)

Fort MYERS, Florida - Emergency crews tried on Thursday to reach stranded Florida residents as a resurgent Hurricane Ian veered toward the Carolinas after cutting a path of destruction across Florida, leaving behind deadly floodwaters, downed power lines and widespread damage.

Ian, one of the strongest storms ever to hit the US mainland, flooded Gulf Coast communities and knocked out power to millions before plowing across the peninsula to the Atlantic Ocean, where it regained strength ahead of another anticipated landfall in South Carolina on Friday afternoon.

Florida's death toll remained uncertain amid scattered reports of casualties. At an evening news briefing, Governor Ron DeSantis acknowledged some people had perished but warned against speculating before official confirmation.

"We fully expect to have mortality from this hurricane," he said.

"The numbers are still unclear, but we're hearing early reports of what may be substantial loss of life," Biden said.

In hard-hit Charlotte County, a spokesperson for the sheriff's department confirmed multiple deaths but did not have a firm figure. Authorities in Sarasota County were investigating two possible storm-related deaths, a sheriff's spokesperson said

In hard-hit Charlotte County, a spokesperson for the sheriff's department confirmed multiple deaths but did not have a firm figure. Authorities in Sarasota County were investigating two possible storm-related deaths, a sheriff's spokesperson said.

A 72-year-old man in Deltona in central Florida died after he went outside during the storm to drain his pool, authorities said.

More than 2.3 million homes and businesses in Florida remained without power, according to tracking website PowerOutage.us.

Georgia, South Carolina and North Carolina were bracing for impact as Ian - which weakened to a tropical storm during its trek across Florida - returned to hurricane strength by 5 pm ET (2100 GMT) after moving into the Atlantic Ocean, with maximum sustained wind speeds of 120 kph, the US National Hurricane Center said.

The storm was forecast to make landfall again about 2 pm ET (1800 GMT) on Friday north of Charleston. A hurricane warning was in effect for hundreds of miles of coastline from the South Carolina-Georgia border north to Cape Fear, North Carolina.

Ian was expected to bring potential life-threatening storm surges and possible tornadoes to the region on Friday, the National Weather Service said.

In South Carolina, Mercedes Benz, Boeing Co, and the seaports that support manufacturers will suspend operations on Friday.

Charleston is particularly at risk, according to a city-commissioned report released in November 2020, which found about 90 percent of all residential properties were vulnerable to storm surge flooding.

Ian blasted ashore in Florida at the barrier island of Cayo Costa on Wednesday afternoon as a Category 4 hurricane with maximum sustained winds of 241 kph.

Sanibel Island, a popular vacation destination, was hit hard, and the only bridge leading to the island was impassable, hampering rescue and aid efforts, said DeSantis, who viewed the devastation from the air earlier on Thursday. Fort Myers Beach also suffered significant damage, the governor said.

There had been at least 700 confirmed rescues as of Thursday evening, DeSantis said. Most schools will reopen on Friday or Monday.

Throughout the day, residents in areas like Venice, in Sarasota County about 120 km south of Tampa, hunted for family and friends while rescue crews worked to reach people trapped in flooded homes.

The search for loved ones was made more difficult as cellphone services were often cut.

"A lot of downed trees, a lot of flooding everywhere. We are trying to get a hold of my daughter," said Terri Byrd, as she tried to get cell service in a Walmart parking lot after spending the night at a Venice elementary school.

In Punta Gorda, directly in the hurricane's path, trees, debris and power lines covered roadways, though many buildings withstood the storm's onslaught better than feared.

"It was insane," local landscaper Jeffrey Chambers, 53, said, describing sideways rain that erased all visibility. "I was like 'Please stop already, just stop.' And it kept going and going."

Brenda Siettas, 62, a paraprofessional who works with students, was in the city in 2004 when Hurricane Charley blasted much of her neighborhood away. Buildings constructed since then are more able to survive high winds, she said.

"They definitely built back much better since Charley," she said. "Back then I stayed here for two weeks: no power, no water, no sewer."

Biden spoke to DeSantis on Thursday, and FEMA Director Deanne Criswell will be in Florida on Friday. Biden said that he will travel to the state when conditions allow.

He also approved a disaster declaration, making federal resources available to the counties impacted by the storm.