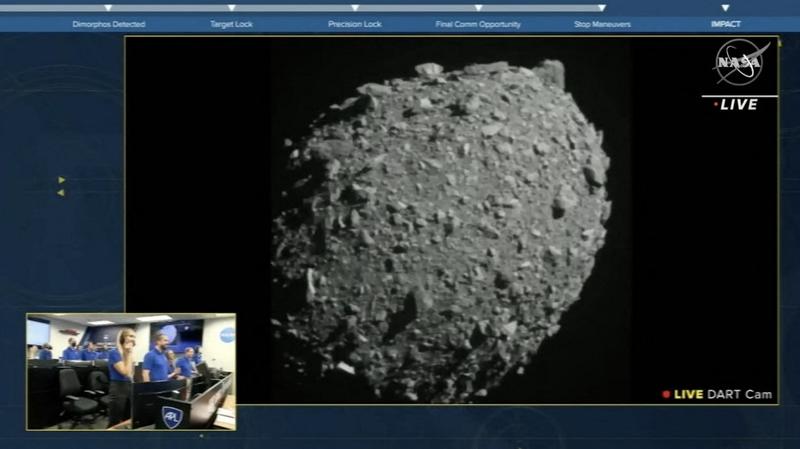 This screengrab made from NASA live feed on Sept 26, 2022, shows Dimorphos just before the Double Asteroid Redirection Test (DART) made impact with the asteroid, as watched by the NASA team (bottom left) at DART headquarters in Laurel, Maryland. (NASA / AFP)

NASA's DART spacecraft successfully slammed into a distant asteroid at hypersonic speed on Monday in a test of the world's first planetary defense system, designed to prevent a potential doomsday meteorite collision with Earth.

Humanity's first attempt to alter the motion of an asteroid or any celestial body played out in a NASA webcast from the mission operations center outside Washington, DC, 10 months after DART was launched.

NASA works for the benefit of humanity, so for us it’s the ultimate fulfillment of our mission to do something like this - a technology demonstration that, who knows, some day could save our home

The livestream showed images taken by DART's camera as the cube-shaped "impactor" vehicle, no bigger than a vending machine with two rectangular solar arrays, streaked into the asteroid Dimorphos, about the size of a football stadium, at 7:14 pm EDT (2314 GMT) some 11 million km from Earth.

The mission was devised to determine whether a spacecraft is capable of changing the trajectory of an asteroid through sheer kinetic force, nudging it off course just enough to keep our planet out of harm's way.

Whether the experiment succeeded beyond accomplishing its intended impact will not be known until further ground-based telescope observations of the asteroid next month. But NASA officials hailed the immediate outcome of Monday's test, saying the spacecraft achieved its purpose.

"NASA works for the benefit of humanity, so for us it’s the ultimate fulfillment of our mission to do something like this - a technology demonstration that, who knows, some day could save our home," NASA Deputy Administrator Palm Melroy, a retired astronaut, said minutes after the impact.

DART, launched by a SpaceX rocket in November 2021, made most of its voyage under the guidance of NASA's flight directors, with control handed over to an autonomous on-board navigation system in the final hours of the journey. 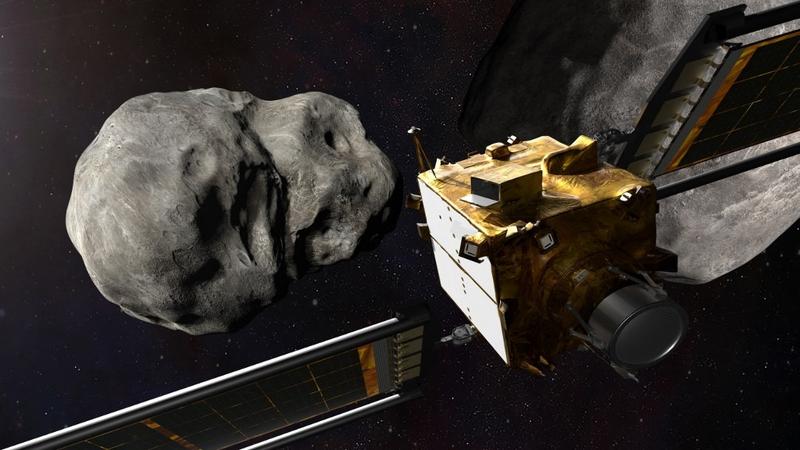 This file artist's illustration obtained from NASA on Nov 4, 2021 shows the Double Asteroid Redirection Test (DART) spacecraft from behind prior to impact at the Didymos binary system. (NASA / JOHNS HOPKINS APL / AFP)

DART's celestial target was an oblong asteroid "moonlet" about 170 meters in diameter that orbits a parent asteroid five times larger called Didymos as part of a binary pair with the same name, the Greek word for twin

Monday evening's bullseye impact was monitored in near real time from the mission operations center at the Johns Hopkins University Applied Physics Laboratory in Laurel, Maryland.

Cheers erupted from the control room as second-by-second images of the target asteroid, captured by DART's onboard camera, grew larger and ultimately filled the TV screen of NASA's live webcast just before the signal was lost, confirming the spacecraft had crashed into Dimorphos.

DART's celestial target was an oblong asteroid "moonlet" about 170 meters in diameter that orbits a parent asteroid five times larger called Didymos as part of a binary pair with the same name, the Greek word for twin.

Neither object presents any actual threat to Earth, and NASA scientists said their DART test could not create a new hazard by mistake.

Dimorphos and Didymos are both tiny compared with the cataclysmic Chicxulub asteroid that struck Earth some 66 million years ago, wiping out about three-quarters of the world's plant and animal species including the dinosaurs.

Smaller asteroids are far more common and present a greater theoretical concern in the near term, making the Didymos pair suitable test subjects for their size, according to NASA scientists and planetary defense experts. A Dimorphos-sized asteroid, while not capable of posing a planet-wide threat, could level a major city with a direct hit. 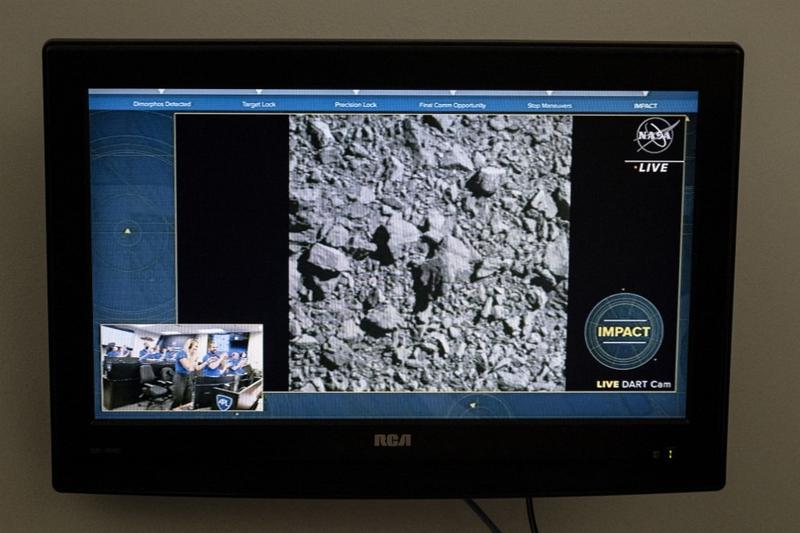 A television at NASA's Kennedy Space Center in Cape Canaveral, Florida, captures the final images from the Double Asteroid Redirection Test (DART) as it smashes into the asteroid Dimorphos on Sept 26, 2022. (JIM WATSON / AFP)

The mission represented a rare instance in which a NASA spacecraft had to crash to succeed. DART flew directly into Dimorphos at 24,000 kph, creating the force scientists hope will be enough to shift its orbital track closer to the parent asteroid.

The DART team said it expects to shorten the orbital path of Dimorphos by 10 minutes but would consider at least 73 seconds a success, proving the exercise as a viable technique to deflect an asteroid on a collision course with Earth - if one were ever discovered.

A small nudge to an asteroid millions of miles away years in advance could be sufficient to safely reroute it.

Earlier calculations of the starting location and orbital period of Dimorphos were made during a six-day observation period in July and will be compared with post-impact measurements made in October to determine whether the asteroid budged and by how much.

Monday's test also was observed by a camera mounted on a briefcase-sized mini-spacecraft released from DART days in advance, as well as by ground-based observatories and the Hubble and Webb space telescopes, but images from those were not immediately available.

DART is the latest of several NASA missions in recent years to explore and interact with asteroids, primordial rocky remnants from the solar system's formation more than 4.5 billion years ago.

Last year, NASA launched a probe on a voyage to the Trojan asteroid clusters orbiting near Jupiter, while the grab-and-go spacecraft OSIRIS-REx is on its way back to Earth with a sample collected in October 2020 from the asteroid Bennu.

The Dimorphos moonlet is one of the smallest astronomical objects to receive a permanent name and is one of 27,500 known near-Earth asteroids of all sizes tracked by NASA. Although none are known to pose a foreseeable hazard to humankind, NASA estimates that many more asteroids remain undetected in the near-Earth vicinity.

NASA has put the entire cost of the DART project at US$330 million, well below that of many of the space agency's most ambitious science missions.