A rendering of Spark’s award-winning Home Farm which combines vertical farming with a retirement home. (PHOTO PROVIDED TO CHINA DAILY)

The speed and scale of urbanization is a major challenge for humanity. According to the United Nations, 68 percent of the world’s population will live in cities by 2050.

Even as we struggle to cope with soaring temperatures and rising carbon dioxide levels, our food supply chains are under stress. Traditional methods of farming have for centuries degraded agricultural land. And according to the United Nations’ Food and Agriculture Organization, agriculture resulted in the emission of 9.3 billion metric tons of carbon dioxide equivalent globally in 2018.

Vertical farming can reduce greenhouse gas emissions drastically. In Hong Kong, which depends to a large extent on imported produce, growing crops in vertically stacked layers is gaining traction among those keen to see the city become more self-sustaining. 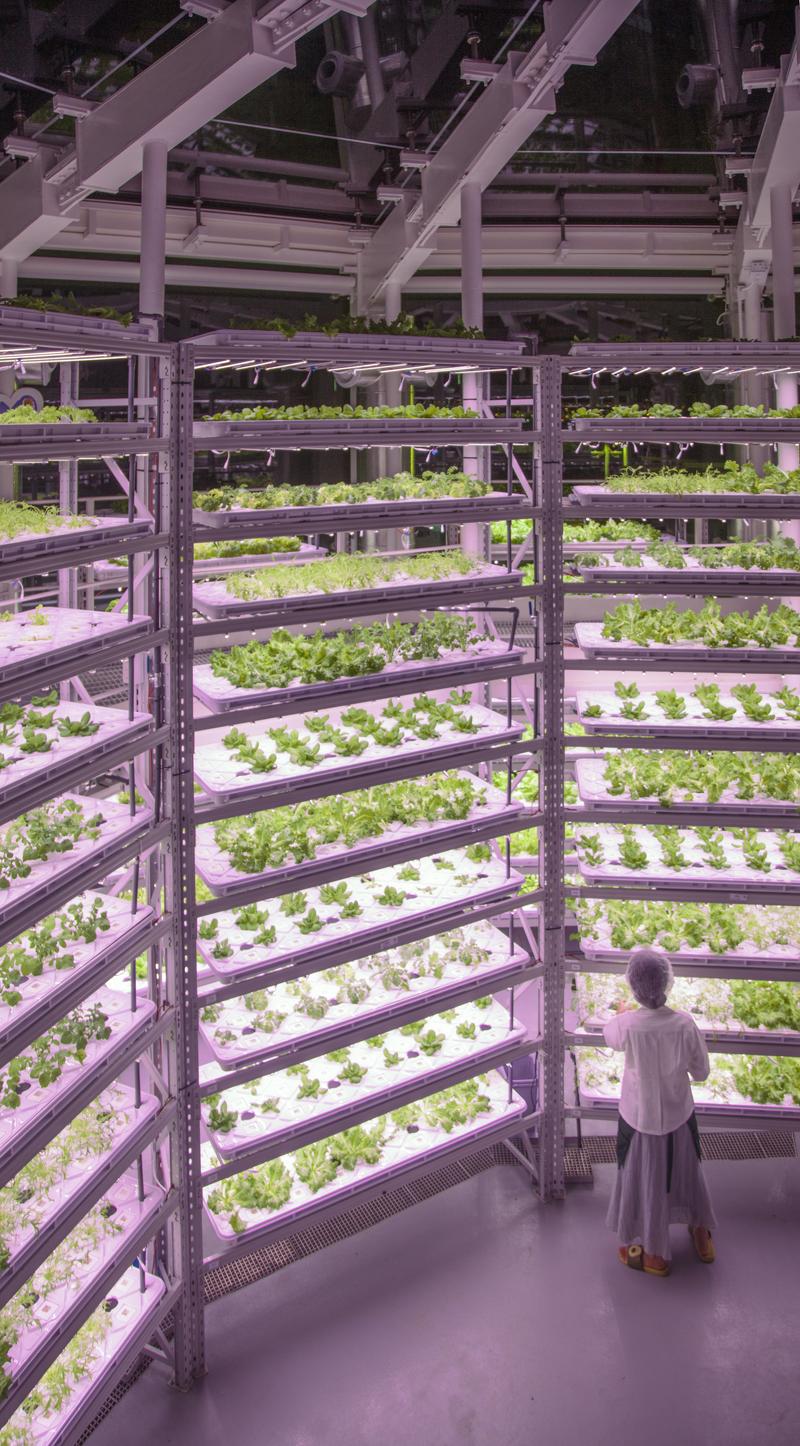 The global vertical farming industry is expected to grow to $9.7 billion by 2026, from $3.1 billion in 2021. Benefits include the ability to mass produce crops, potentially year-round, using fewer resources and causing a reduced environmental impact. Without the need for soil or chemicals, vertical farms are insulated from seasonal weather by HVAC (heating, ventilation and air-conditioning) technologies. Optimal growth is ensured by controlling temperature, humidity and carbon dioxide concentration.

Whether (vertical farming is) financially viable and sustainable will depend on the species, scale and location. Only certain species that (otherwise) require huge food miles will currently make financial and sustainable sense.

K-Farm in Kennedy Town is into hydroponics (growing plants in a nutrient solution rather than soil), aquaponics (combining aquaculture, or the growing of fish, with hydroponics) and organic farming. The farm’s co-founder, architect Vicky Chan, describes it as “an experiment to produce leafy greens in a controlled environment”, adding that the technologies involved have proven effective. According to Hong Kong’s Agriculture, Fisheries and Conservation Department, since 2016 — the year the government’s New Agriculture Policy was implemented — nearly 50 hydroponic farms have sprung up around the city. Around half of them practice vertical farming.

At the entrance, glass panels fitted with fans guard against insects and bacteria. The temperature inside is noticeably cool. Neatly stacked trays on tall metal shelves hold plants photosynthesizing under LED lights. K-Farm grows various leafy greens as well as strawberries and tomatoes.

Red and blue lights are deployed at different stages to optimize growth and regulate the timing of flowering. Chan describes the system as “a loop that allows water to cycle and plants to be monitored by sensors”.

He adds that K-Farm was founded with a view to spreading awareness of sustainable vertical farming methods. “Whether it’s financially viable and sustainable will depend on the species, scale and location. Only certain species that (otherwise) require huge food miles will currently make financial and sustainable sense.”

Tucked away in busy Kwai Chung, meanwhile, is Full Nature, a midsize, commercial vertical farm specializing in aquaponics. Edible flowers, microgreens and herbs are seen growing indoors in a controlled environment in this highly automated facility, with its large fish tanks and high-tech filtration systems. In-house software is integrated with a system that monitors, collects data and issues alerts when necessary — “a solution for efficiency and consistency”, explains Ray Lok, Full Nature’s founder and CEO.

Aquaponic farming uses an ecosystem comprising fish, microbes and plants. Fish waste is converted by nitrifying bacteria into nutrients plants can use. “Knowledge from soil-based farming can be applied to aquaponics in terms of nutrient dynamics and microbes,” notes Lok. “The trick is to have the right amount of fish and the right temperature — the ratio between fish bacteria and plants grown must be proportionate.”

Aquaponics is suitable for integrating automation and is scalable, he adds.

Global design firm Sasaki has designed an environment-friendly vertical farm complex to be built between Shanghai’s international airport and the city center. Called the Sunqiao Urban Agricultural District, the project is designed to provide a sustainable means of supporting Shanghai’s growing population.

The design (of the Sunqiao Urban Agricultural District) addresses controlled-environment agriculture, with a portion dedicated to aquaponic research and ancillary research.

“The design addresses controlled-environment agriculture, with a portion dedicated to aquaponic research and ancillary research,” says lead designer Michael Grove. “Adjacent technologies related to vertical farming — such as LED lighting, solar panels and other related innovations that may improve controlled-environment agriculture — were considered in the master plan, including an educational and visitation component.”

He adds that vertical farming would work well in Shanghai as more than half of the traditional Shanghainese diet consists of leafy greens.

Sunqiao is one of the first of its kind in the area, or as Grove says, “a testing bed for new ideas and performing independent research.” Besides growing leafy greens — a commodity that’s easy to sell — “Sunqiao will experiment with new crops, aquaponics and hydroponics, and even algae for energy generation. The intention is to understand what’s working from a sustainable perspective, double down on methods proving successful and (eventually) replicate them throughout China.”

In Singapore, architecture studio Spark has designed the award-winning Home Farm, a unique vertical farm with a social mission. The city-state is facing food insecurity as well as a rapidly aging population, with a quarter of Singaporeans estimated to be 65 years or older by 2030. Spark’s design concept is aimed at maximizing food quality and security, social interactions, sustainability, placemaking and healthcare delivery.

“There would be a professional management team, but all the general jobs will be available to the elderly — the residents of Home Farm — to allow them to earn an income,” explains Stephen Pimbley, Spark’s director. “We’re keen to see this project materialize at some point in the future. The concept is a realizable solution to real and pressing problems faced by many of the world’s growing cities.”

Climate-positive vertical farm design encompasses everything from sustainable solutions such as rainwater collection and renewable energy to sourcing local and recycled materials. “Resource availability, embodied carbon (of the materials used) as well as vertical farm lifespan will be crucial at the building level,” notes Gianni Talamini, associate professor and leader of City University of Hong Kong’s Master of Urban Design and Regional Planning program.

“Integrating other functions and articulating open space will be of primary importance at the urban design level. Considering transportation necessities and holistic integration with existing food systems will also be essential to planning. Vertical farming requires specific technical knowledge that’s typically not delivered within conventional architecture programs worldwide,” Talamini says, adding that such a gap opens up possibilities for a new interdisciplinary field.

Being able to integrate and manage the technological systems critical to controlled environmental farming is one of the major challenges vertical farms are faced with. “Technology that allows flexibility of use while resulting in quality space that can be retrofitted for other functions in the future is critical,” Talamini affirms.

Against the backdrop of rapid urbanization and an ever-expanding global population, vertical farming has the potential to bring greater productivity and innovation as well as sustainable solutions with far-reaching benefits for future generations.