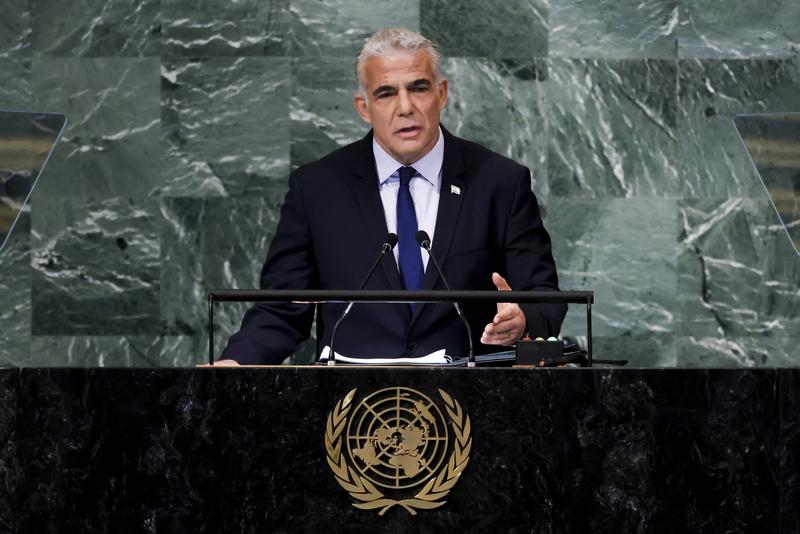 JERUSALEM - Israeli Prime Minister Yair Lapid pledged support for the two-state solution to the Israeli-Palestinian conflict during his Thursday address to the United Nations General Assembly in New York.

The establishment of a Palestinian state, alongside Israel, is the right solution to the yearslong bloody conflict, Lapid said, marking the first time in years that an Israeli leader publicly expresses support for the two-state solution.

"An agreement with the Palestinians, based on two states for two peoples, is the right thing for Israel's security, for Israel's economy and for the future of our children," Lapid noted, in his speech, which was broadcast on Israel's main TV channels.

An agreement with the Palestinians, based on two states for two peoples, is the right thing for Israel's security, for Israel's economy and for the future of our children…We have only one condition that a future Palestinian state will be a peaceful one

He called on other countries to follow the United Arab Emirates and Bahrain, which agreed to normalize ties with Israel in 2020.

"Israel seeks peace with our neighbors," Lapid said, adding that "we call upon every Muslim country -- from Saudi Arabia to Indonesia -- to recognize that, and to come to talk to us. Our hand is outstretched for peace."

Israeli withdrawal from the West Bank and Gaza Strip, where the Palestinians wish to build their future state, is a highly contested issue in Israel. Israel still controls these lands, despite a persistent Palestinian struggle and international condemnation.

Former Israeli prime minister Benjamin Netanyahu pledged his support to a two-state solution based on a territorial compromise in a speech in 2009. However, he later renounced the idea of a Palestinian state several times during his re-election campaigns.

The last round of peace talks between Israel and the Palestinians took place in 2014 before they reached an impasse over the Israeli expansion of the Jewish settlements in the West Bank.