Fed delivers another big rate hike; Powell vows to 'keep at it' 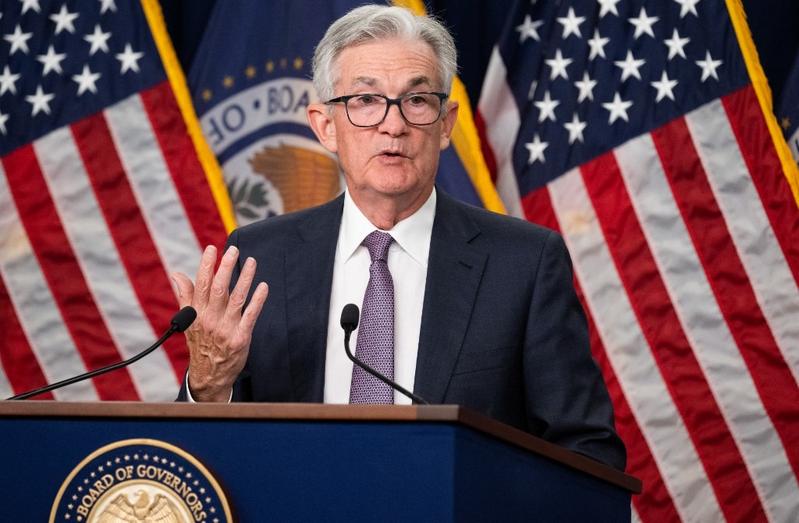 US Federal Reserve Board Chairman Jerome Powell speaks during a news conference in Washington, DC, on Sept 21, 2022. The Fed raised the key US interest rate again and said more hikes are coming as it battles soaring prices. (SAUL LOEB / AFP)

WASHINGTON – Federal Reserve Chair Jerome Powell vowed on Wednesday that he and his fellow policymakers would "keep at" their battle to beat down inflation, as the US central bank hiked interest rates by three-quarters of a percentage point for a third straight time and signaled that borrowing costs would keep rising this year.

In a sobering new set of projections, the Fed foresees its policy rate rising at a faster pace and to a higher level than expected, the economy slowing to a crawl, and unemployment rising to a degree historically associated with recessions.

Powell was blunt about the "pain" to come, citing rising joblessness and singling out the housing market, a persistent source of rising consumer inflation, as being likely in need of a "correction."

Earlier on Wednesday, the National Association of Realtors reported that US existing home sales dropped for a seventh straight month in August.

We have got to get inflation behind us ... I wish there were a painless way to do that. There isn't.

The United States has had a "red hot housing market ... There was a big imbalance," Powell said in a news conference after Fed policymakers unanimously agreed to raise the central bank's benchmark overnight interest rate to a range of 3.00 percent-3.25 percent.

"What we need is supply and demand to get better aligned ... We probably in the housing market have to go through a correction to get back to that place."

That theme, of a continuing mismatch between US demand for goods and services and the ability of the country to produce or import them, ran through a briefing in which Powell stuck with the hawkish tone set during his remarks last month at the Jackson Hole central banking conference in Wyoming.

Recent inflation data has shown little to no improvement despite the Fed's aggressive tightening – it also announced 75-basis-point rate hikes in June and July – and the labor market remains robust with wages increasing as well.

The federal funds rate projected for the end of this year signals another 1.25 percentage points in rate hikes to come in the Fed's two remaining policy meetings in 2022, a level that implies another 75-basis-point increase in the offing. 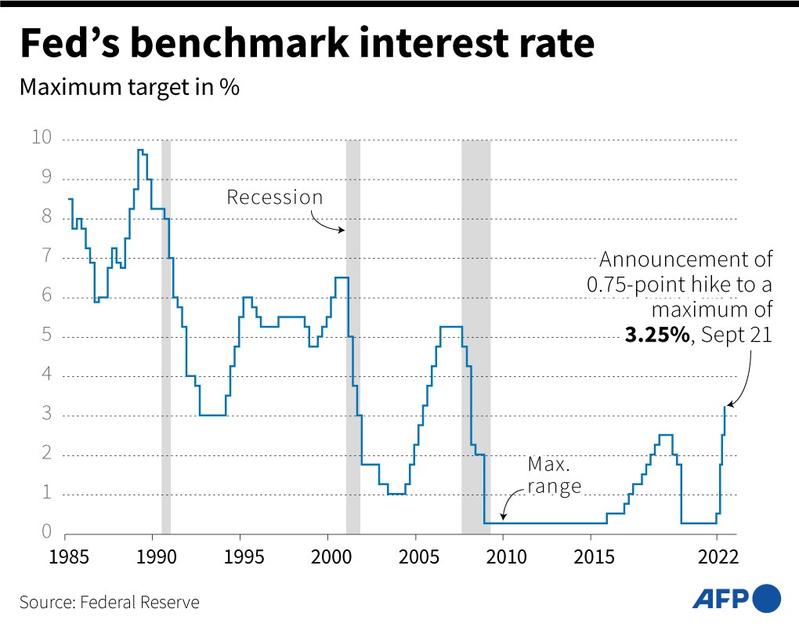 "The committee is strongly committed to returning inflation to its 2 percent objective," the central bank's rate-setting Federal Open Market Committee said in its policy statement after the end of a two-day policy meeting.

The Fed "anticipates that ongoing increases in the target range will be appropriate."

ALSO READ: HKMA raises base rate to 3.5% after Fed hike

Powell said the indicated path of rates showed the Fed was "strongly resolved" to bring down inflation from the highest levels in four decades and that officials would "keep at it until the job is done" even at the risk of unemployment rising and growth slowing to a stall. 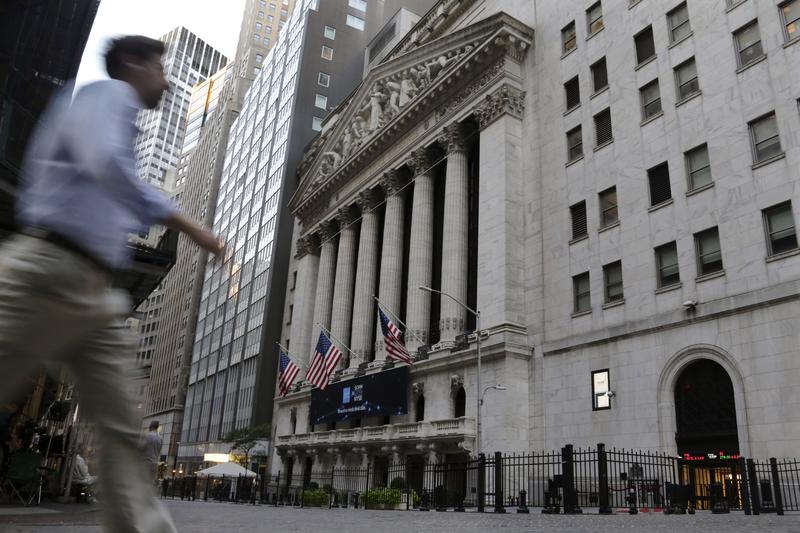 A man walks past the New York Stock Exchange in New York on Sept 21, 2022. Stocks were off to a modestly higher start on Wall Street ahead of a widely expected interest rate increase by the Federal Reserve. (PETER MORGAN / AP)

"We have got to get inflation behind us," Powell told reporters. "I wish there were a painless way to do that. There isn't."

Inflation by the Fed's preferred measure has been running at more than three times the central bank's target. The new projections put it on a slow path back to 2 percent in 2025, an extended Fed battle to quell the highest bout of inflation since the 1980s, and one that potentially pushes the economy to the borderline of a recession.

The Fed said that "recent indicators point to modest growth in spending and production," but the new projections put year-end economic growth for 2022 at 0.2 percent, rising to 1.2 percent in 2023, well below the economy's potential. The unemployment rate, currently at 3.7 percent, is projected to rise to 3.8 percent this year and to 4.4 percent in 2023. That would be above the half-percentage-point rise in unemployment that has been associated with past recessions.

"The Fed was late to recognize inflation, late to start raising interest rates, and late to start unwinding bond purchases. They've been playing catch-up ever since. And they're not done yet," said Greg McBride, chief financial analyst at Bankrate.

US stocks, already mired in a bear market over concerns about the Fed's monetary policy tightening, ended the day sharply lower, with the S&P 500 index skidding 1.8 percent.

In the US Treasury market, which plays a key role in the transmission of Fed policy decisions into the real economy, yields on the 2-year note vaulted over the 4 percent mark, their highest levels since 2007.

The dollar hit a fresh two-decade high against a basket of currencies, gaining more than 1 percent. The US currency's strength – it has appreciated by more than 16 percent on a year-to-date basis – has stoked concern at central banks around the world about potential exchange rate and other financial shocks.

Some are not even trying to match the Fed's blistering pace of tightening, with the Bank of Japan on Thursday expected to hold fast to its ultra-easy policy and keep its policy rate at minus 0.1 percent, likely leaving it as the last major monetary policy authority in the world with a negative policy rate.

Others are making an effort to stay somewhat abreast of the Fed. The Bank of England, for example, is expected to lift its policy rate by at least half a percentage point on Thursday.