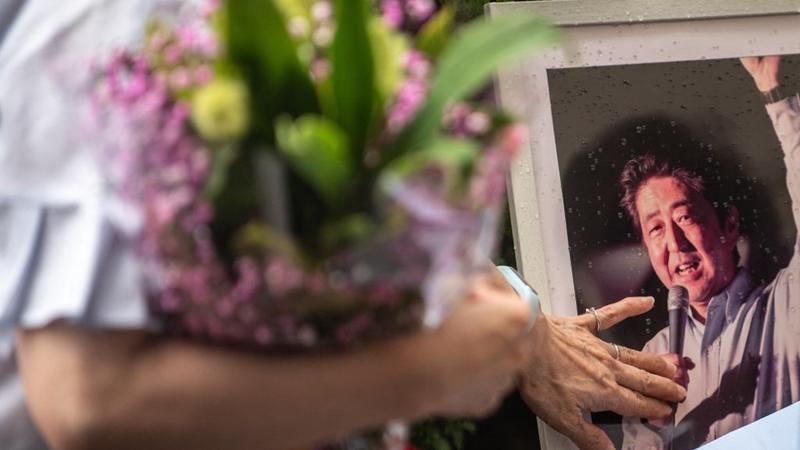 People line up to place flowers at a makeshift memorial outside Yamato-Saidaiji Station, where former Japanese prime minister Shinzo Abe was shot on July 8, in Nara on July 9, 2022. (PHILIP FONG / AFP)

TOKYO – Japan will spend US$1.83 million on a state funeral for slain former leader Shinzo Abe, the government said on Friday, despite growing opposition from a public angered by revelations of the ruling party's ties to the Unification Church.

Abe's suspected assassin, arrested at the scene moments after the shooting, bore a grudge against the Unification Church, alleging it bankrupted his mother, and he blamed Abe for promoting it, according to his social media posts and news reports

Abe, Japan's longest-serving but divisive premier, was shot and killed at an election rally on July 8, and although funeral services were held soon after, Japan has decided to hold a state funeral at Tokyo's Nippon Budokan arena on Sept 27.

The government of Prime Minister Fumio Kishida, an Abe protege, decided the state funeral would be paid for solely with state funds.

But opinion polls show persistent opposition to the idea. In the latest, published on Sunday, 53 percent of respondents were against a state funeral.

The public has been angered by revelations of ties between the ruling party and the Unification Church, which a vast majority of respondents to opinion polls feel has not been fully explained and has become a major headache for Kishida, dragging down his support rates.

The church, founded in South Korea in the 1950s and famous for its mass weddings, has over the years faced questions over how it solicits donations.

Abe's suspected assassin, arrested at the scene moments after the shooting, bore a grudge against the church, alleging it bankrupted his mother, and he blamed Abe for promoting it, according to his social media posts and news reports.

The man is undergoing psychiatric evaluation, media has reported.

Japan's last fully state-funded funeral for a prime minister was for Shigeru Yoshida in 1967. Subsequent ones have been paid for by both the state and the ruling Liberal Democratic Party, of which Abe was an influential member.

Several current and former world leaders are expected to attend, with news reports saying arrangements were being made for former US President Barack Obama.

Russian President Vladimir Putin will not attend, the Kremlin said in July.