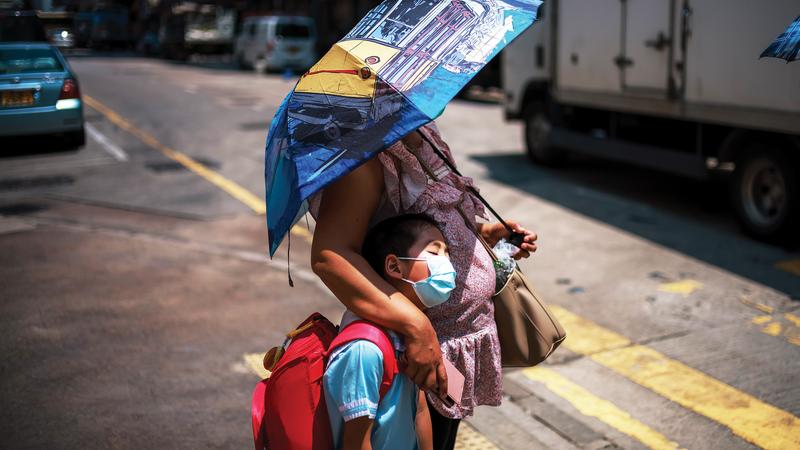 Mother and child feel the heat as they wait for a green light at a Sham Shui Po crossing in Hong Kong on July 24, 2022. (ANDY CHONG / CHINA DAILY)

HONG KONG - Hong Kong’s daily COVID-19 caseload again topped 5,000 on Tuesday as the authorities said there has been a “significant increase” in the number of COVID cases involving children.

Albert Au Ka-wing, principal medical and health officer of the Centre for Health Protection’s communicable disease branch, said in a press briefing that there were 5,162 new cases, including 272 imported infections.

Lau Ka-hin, chief manager (quality and standards) of the Hospital Authority, said in a briefing that two clusters were detected at the Tuen Mun Hospital and at the Pamela Youde Nethersole Eastern Hospital

The last time the new cases topped 5,000 was on Saturday when 5,308 infections were reported. Cases with the infectious Omicron subvariants BA.5 or BA.4 also continued to increase and accounted for 24.5 percent of new infections.

“Globally, when BA.5 becomes prevalent, then within a few weeks  it will continue to climb and will become the mainstream subvariant in the community because of its heightened transmissibility,” Au said.

“We expect the same to happen in Hong Kong. In the past few weeks, we’ve been seeing more BA.5 or a high proportion of L452R and we believe this trend will continue,” he added.

For children aged 3 to 9 years old, the total number of cases in the past two weeks reached 3,483, or an increase from the 3,263 infections in the previous two weeks, Lau said.

“So, there is a significant increase in the actual of cases affecting young children,” Au said.

Of the 272 imported cases, 99 were confirmed at the airport, 90 at quarantine hotel, and 83 in community testing centers. More than ten cases each were detected from India, the United Kingdom, Singapore, the Philippines, Thailand, and the United States.

Lau Ka-hin, chief manager (quality and standards) of the Hospital Authority, said in the same briefing that two clusters were detected at the Tuen Mun Hospital and at the Pamela Youde Nethersole Eastern Hospital.

A patient assistant at the oncology ward of Tuen Mun Hospital tested positive on Aug 11 and further tests showed that nine patients, aged 45 to 87 years old, and four staff members were confirmed to be infected.

“They are now being isolated. One of these patients -- a 53-year-old male -- is classified as critical,” Lau said, adding that two other patients were in serious condition.

At the internal medicine ward of Eastern Hospital, a male patient tested positive upon admission on Aug 13. More tests were conducted and five patients, aged 67 to 95 years old, and one staff member also tested positive.

“They are in stable condition. All the patients and staff members of the hospital will be tested. The medical ward has suspended admission and also any visitation. It was thoroughly disinfected,” Lau said.

The youngest was a 60-year-old man who had lung cancer but did not report to authorities that he tested positive through a rapid antigen test on Aug 11.

“He did not seek medical help and his situation worsened…On Aug 14, he passed away,” Lau said.

The CHP's Au also reported another death not included in the HA count. It involved an 86-year-old man who was found unconscious at home but was already dead when an ambulance arrived. An autopsy later showed that he was infected with COVID.

Lau said 1,813 patients were being treated in public hospitals as of Tuesday, including 254 new patients. Twenty-seven were in critical condition, including nine receiving intensive care, and 26 in serious condition.