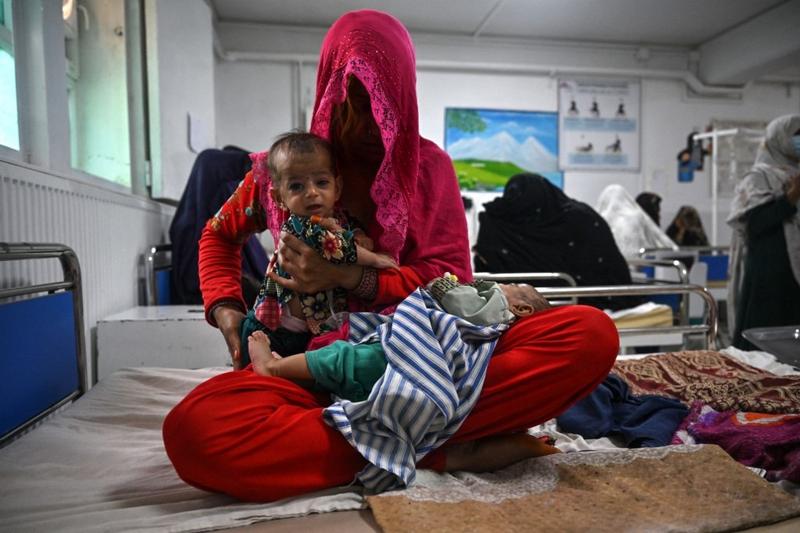 In this photo taken on July 21, 2022, a woman sits on a hospital bed with her four-month-old twins in the malnutrition ward at the Boost Hospital, run by Medicines Sans Frontiers (MSF), in Lashkar Gah, Helmand, Afghanistan. The heaving wards of a ramshackle clinic in southern Afghanistan are just one sign of the catastrophic humanitarian crisis that has gripped the war-ravaged country. (LILLIAN SUWANRUMPHA / AFP)

ISLAMABAD - More than 70 economists and experts, including Nobel Laureate Joseph Stiglitz, called for Washington and other nations to release Afghanistan's central bank assets in a letter sent to US President Joe Biden on Wednesday.

According to the letter, foreign capitals needed to return the roughly US$9 billion in Afghan central bank assets to Da Afghanistan Bank (DAB) to allow the economy to function.

"The people of Afghanistan have been made to suffer doubly for a government they did not choose," the letter said. "In order to mitigate the humanitarian crisis and set the Afghan economy on a path toward recovery, we urge you to allow DAB to reclaim its international reserves."

The letter, also addressed to US Treasury Secretary Janet Yellen, was signed by 71 economists and academic experts, many based in the United States as well as Germany, India and the United Kingdom. Among them was former Greek finance minister Yanis Varoufakis and Stiglitz, a Columbia University professor who received the Nobel Prize in economics in 2001 and is on the advisory board to the Washington-based think tank the Center for Economic and Policy Research, which organized the letter.

Afghanistan's economy has plunged deep into crisis since the Taliban took over almost a year ago as foreign forces withdrew. The sudden cut in aid and other factors including inflation driven by conflict in Ukraine have contributed, but economists say the country is severely hampered by the inability of its central bank to function without access to its reserves.

This has resulted in a sharp depreciation of the Afghan currency, pushing up import prices, and led to a near collapse of the banking system with citizens facing problems accessing their savings and receiving salaries.

"Without access to its foreign reserves, the central bank of Afghanistan cannot carry out its normal, essential functions ... the economy of Afghanistan has, predictably, collapsed," the letter reads.

Washington and other capitals say they want to find a way to release the funds for the benefit of the Afghan people while not benefiting the Taliban, whom they have condemned for imposing severe restrictions on women's freedoms in the last year and allegedly carrying out human rights abuses including vendettas against former enemies.

The Taliban say they respect rights in accordance with their interpretation of Islamic law and that individual abuses would be investigated.

Despite their widely differing stances, both sides are engaged in detailed discussions over plans to possibly release the central bank assets, around US$7 billion of which is held in the United States. Roughly half of that is currently set aside as it is the subject of a court battle related to the 9/11 attacks.

Key sticking points remain in the banking talks, in particular over US objections to the Taliban's appointment of a deputy governor of the central bank who is subject to US sanctions.