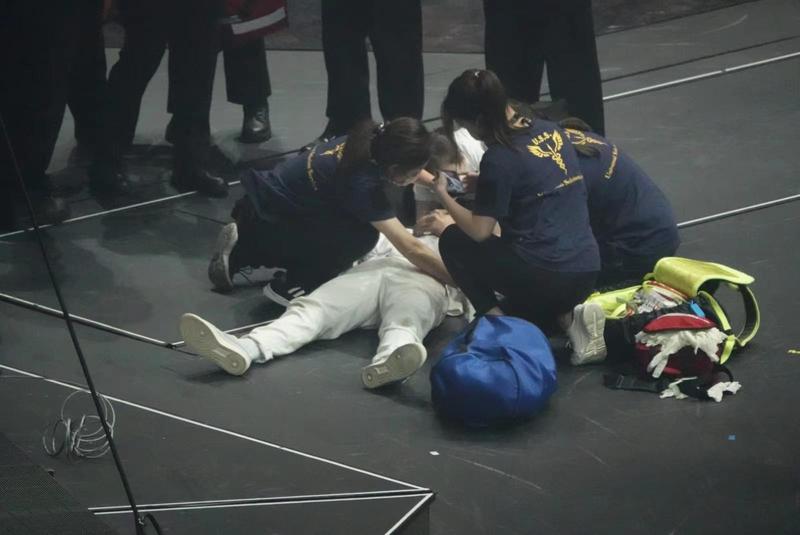 Paramedics attend a performer injured when a huge video panel fell on the stage during a concert by popular Hong Kong boyband Mirror on July 28, 2022. (PHOTO PROVIDED TO CHINA DAILY)

HONG KONG – A huge video panel fell on the stage during a concert by popular Hong Kong boyband Mirror on Thursday, crushing one performer and trapping others, prompting a government investigation and the suspension of future shows.

At least two dancers were injured, with one in a serious condition and the other stable, local broadcaster RTHK reported.

Three members of the audience were also injured, local media reported, with many fans emotional after the harrowing scenes. 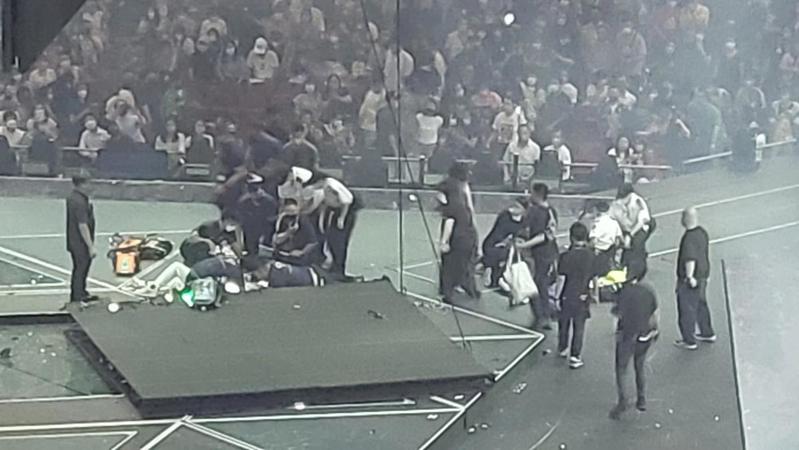 Rescuers and paramedics attended to performers injured when a huge video panel fell on the stage during a concert by popular Hong Kong boyband Mirror on July 28, 2022. (PROVIDED TO CHINA DAILY)

"I am shocked by the incident. I express sympathy to those who were injured and hope that they would recover soon," Hong Kong Chief Executive John Lee Ka-chiu said on Friday.

He ordered a comprehensive investigation into the incident and a review of the safety requirements of similar performance activities in order to protect the safety of performers, working staff and members of the public.

I am shocked by the incident. I express sympathy to those who were injured and hope that they would recover soon.

When asked by a reporter at a briefing whether family members of one of the injured dancers need to undergo quarantine when they return to Hong Kong from overseas, Lee said the government will offer all assistance to them, including hospital visiting arrangements.

In a statement issued Friday, a spokesman for the Health Bureau said the family members can visit the patient at the hospital "as soon as they have completed the necessary inbound quarantine procedures upon arrival in Hong Kong, including obtaining negative test results and quarantine orders."

None of the 12 members of Mirror were hurt in the accident at Hong Kong's Coliseum, next to Victoria Harbour.

The city's government had ordered the band, which was putting on a run of 12 shows at the venue, to postpone its upcoming performances.

Expressing grave concern over the incident, Secretary for Culture, Sports and Tourism Kevin Yeung asked the Leisure and Cultural Services Department to set up a task force to be led by an assistant director to work with the Labour Department and relevant parties to investigate the cause of the accident and to follow up on it. 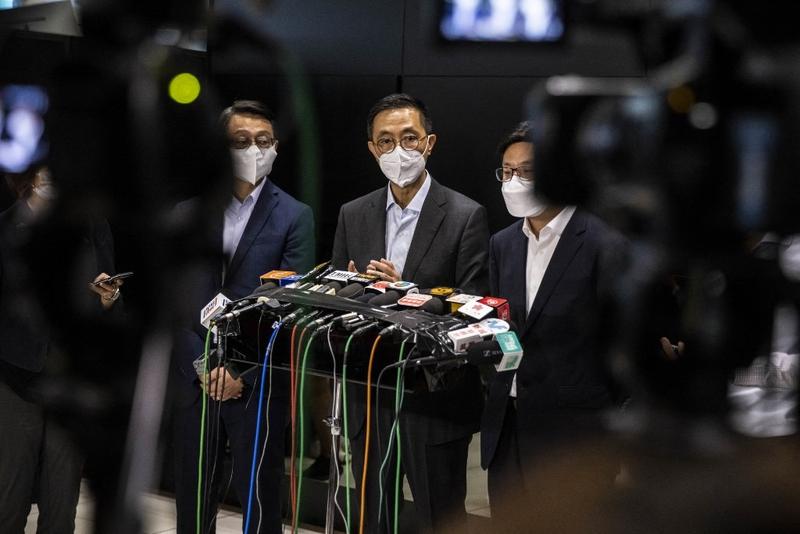 (From left) Director of Leisure and Cultural Services Vincent Liu, Secretary for Culture, Sports and Tourism Kevin Yeung and Secretary for Labour and Welfare Chris Sun attend a press conference in Hong Kong on July 29, 2022, after two support dancers were injured, one seriously, at a concert for Canto pop boy band Mirror when an LED display screen fell from the ceiling on July 28, 2022. (ISAAC LAWRENCE / AFP)

“In view of the accident, the government has already instructed the concert to be suspended until the structure of the stage is proved to be safe,” he said in a statement on Friday.

"From initial observation, a wire fractured and led to the fall of the screen and caused the dancers to be injured," Yeung told a media briefing on Friday.

Yeung said the hirer on the arrangement of the performance have to have a professional registered engineer to certify that the setup is safe. 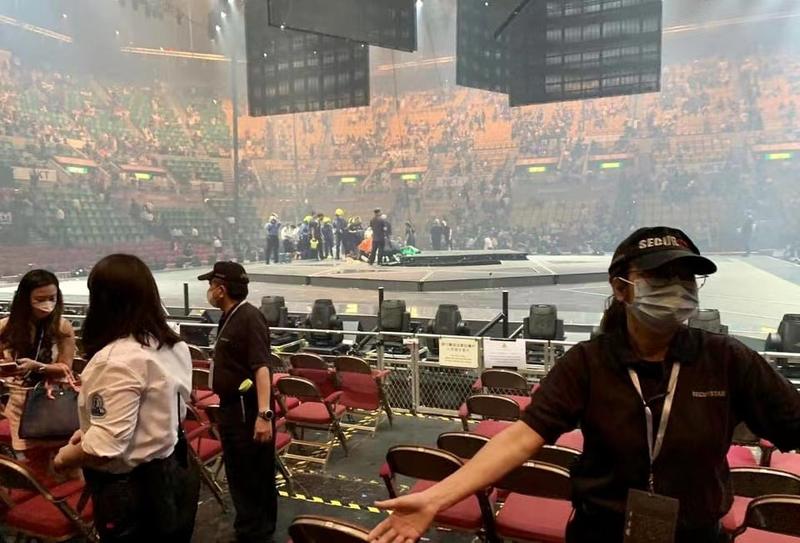 Guards make the audience leave after a huge video panel fell on the stage and injured performers during a concert by popular Hong Kong boyband Mirror on July 28, 2022. (PROVIDED TO CHINA DAILY)

The government's leisure bureau had already contacted the concert organiser about other stage incidents in recent days and asked them to review and improve on the situation, according to Yeung.

The hugely popular cantopop group was formed in 2018 through a reality television show and had planned a series of 12 shows at Hong Kong's Coliseum.

More than 13,000 Mirror fans signed an online petition asking the concert organiser to resolve the problems and ensure safety for all performers, according to the petition's website. 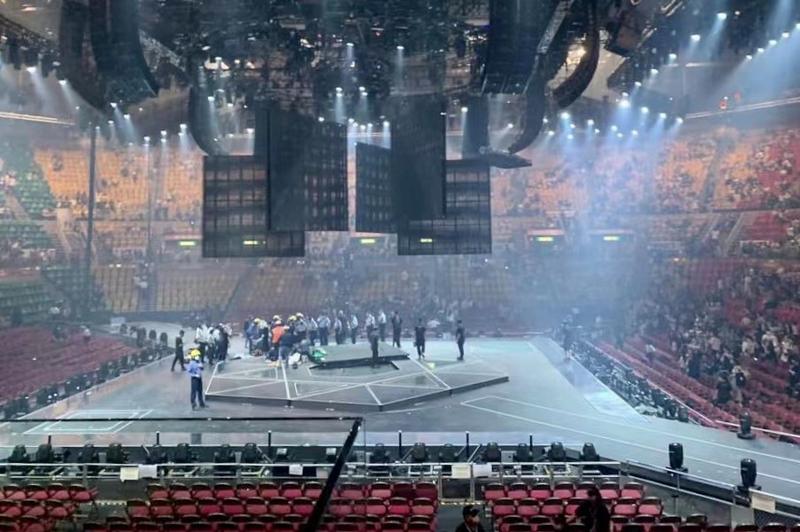 The audience look on as paramedics attend performer injured when a huge video panel fell on the stage during a concert by popular Hong Kong boyband Mirror on July 28, 2022. (PHOTO PROVIDED TO CHINA DAILY)

MakerVille, the concert organiser which is owned by Hong Kong tycoon Richard Li's PCCW Media Group, said it was thoroughly investigating the cause of the accident.

"We are deeply sorry that the incident caused unease to viewers or others affected."

It added that remaining shows will be canceled and that it will announce ticket refund arrangements as soon as possible.