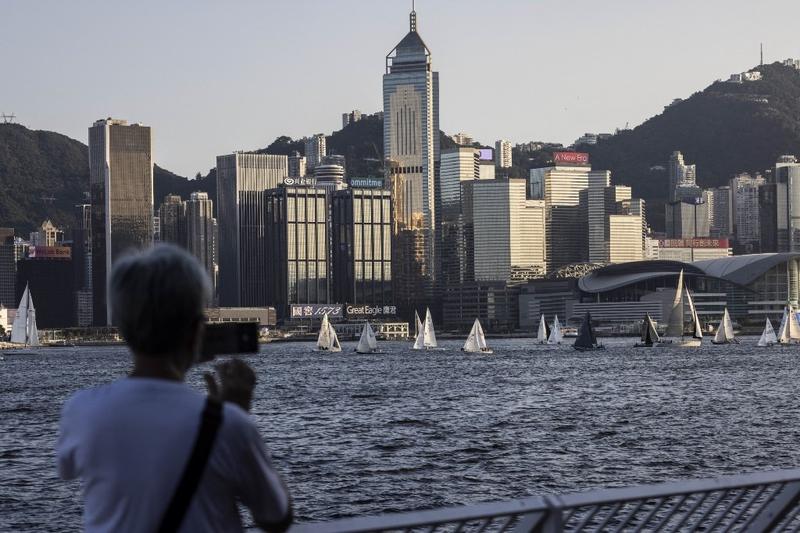 A woman takes a photo of sailing boats on Victoria Harbour in Hong Kong on July 22, 2022. (ISAAC LAWRENCE / AFP)

Gladys Kwan, Chief Manager (Clinical Effectiveness and Technology Management) of the Hospital Authority, said in a news briefing that the elderly patients who passed away included seven men and three women aged 74 to 97 years old. None of them had the required three vaccine jabs against the coronavirus.

Chuang Shuk-kwan, head of the communicable disease branch of the Centre for Health Protection, said that the new cases comprised 4,288 local infections and 220 imported cases

“I would like to appeal to those who test positive, especially the elderly and those who have chronic diseases. Their condition could deteriorate rather quickly as you can see from the 10 death cases I mentioned just now,” Kwan said.

“For the elderly, their condition could deteriorate really quickly when they start with mild symptoms. So if you test positive, you must report the case even if you have only mild symptoms. We would like you to seek treatment as soon as possible.”

Kwan said nine of the 10 had chronic illnesses like hypertension, cancer, and diabetes. The 10th patient was a 76-year-old woman who had no chronic diseases but was unvaccinated.

She showed no symptoms before she was found unconscious at home. When the ambulance arrived, her heart was no longer beating, Kwan said.

She said 1,390 COVID patients were being treated in public hospitals as of Wednesday, including 162 new patients.

Nineteen were in serious condition while 28 others were critical, including eight in intensive care, Kwan added.

Chuang Shuk-kwan, head of the communicable disease branch of the Centre for Health Protection, said at the same briefing that the new cases on Wednesday comprised 4,288 local infections and 220 imported cases.

She said 112 of the imported infections were detected at the airport, 87 at quarantine hotels, and 21 after they finished quarantine.

Chuang said one of the school bus services reported that two students and one worker and a nanny were infected but there was no major outbreak.

“We are not seeing a serious problem with school buses. We just want to prevent infections from getting into schools and causing major outbreaks,” she said.

Meanwhile, Secretary for Health Lo Chung-mau thanked the Hong Kong Private Hospital Association for providing more hospital beds in a gradual manner to receive patients referred from the HA, according to government statement.

"All 13 private hospitals are willing to provide a total of 364 hospital beds, including those for COVID-19 patients and non-COVID-19 patients, at the initial stage to address the HA's immediate needs,” Lo was quoted as saying in the statement.

“Depending on the actual demand, the number of hospital beds can be gradually brought up to around 1,000.”

The HA will start discussions with the private hospitals on the plan for matching one to three private hospitals with each HA cluster for receiving patients referred from public hospitals to ensure effective use of hospital beds and the early transfer of patients.