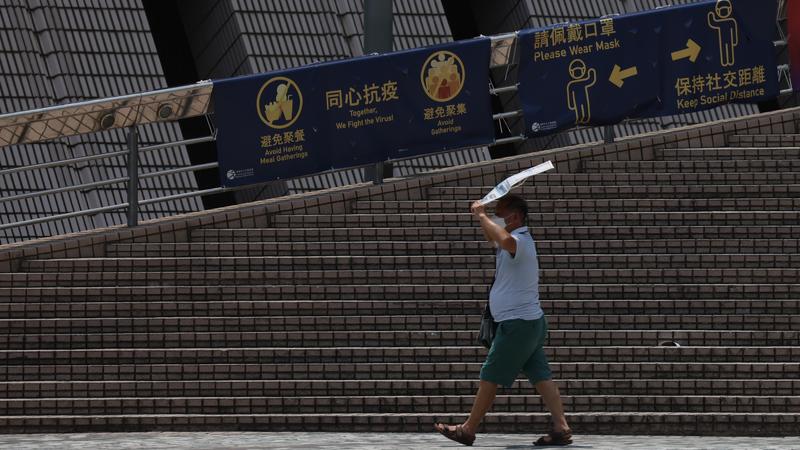 A pedestrian walks along the promenade in Tsim Sha Tsui, Hong Kong as temperatures reached 36 degrees Celsius in the city on July 25, 2022. (CALVIN NG / CHINA DAILY)

HONG KONG – Hong Kong reported 4,130 new COVID-19 cases on Monday as the Hospital Authority tightened testing requirements for both hospital staff members and patients to prevent the spread of the coronavirus.

Gladys Kwan, Chief Manager (Clinical Effectiveness and Technology Management) of the HA, said in a news briefing that staff members working in rehabilitation and psychiatric wards will have to take two extra polymerase chain reaction (PCR)-based nucleic acid tests every week, besides taking daily rapid antigen tests, while admitted patients will be tested on their first and third day of stay.

“We hope that, with the enhanced testing of staff members, we can minimize transmission in hospitals,” Kwan said, adding that they will also review the rules for visitors.

The HA earlier required hospital staff members taking care of cancer patients and those who require dialysis to take the two extra PCR tests every week. Kwan said this led to the detection of at least eight cases.

She said 1,409 COVID patients were being treated in public hospitals as of Monday, including 183 new patients. Thirty were in critical condition, including two in intensive care, and 21 were in serious condition.

Kwan also said three COVID patients passed away, including a man and two women aged 71 to 96. They also had chronic diseases like hypertension, dementia, and renal disease.

Chuang Shuk-kwan, head of the communicable disease branch of the Centre for Health Protection, said in the same briefing that the new cases comprised 224 imported infections and 3,906 local cases.

She said 129 of the imported cases were detected at the airport, 77 at quarantine hotels, and 18 after they left quarantine.

She also said that 649 schools reported 941 students and 171 being infected from Friday to Sunday. Seven schools each had to suspend one in-person class for a week while one school suspended two classes due to infections.

Chuang added that the requirement for students and school staff members to take an RAT test before going to class has been successful in preventing any major outbreak in schools.