By Oasis Hu in Hong Kong 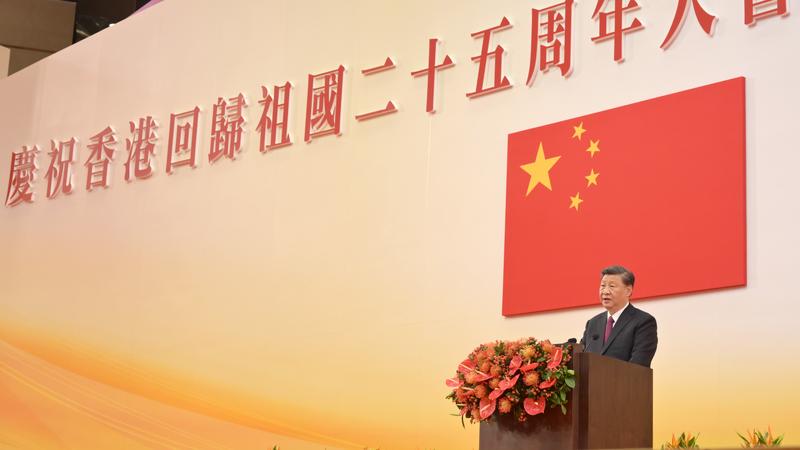 President Xi Jinping delivers a speech at the swearing-in ceremony of the sixth-term government of the Hong Kong Special Administrative Region at the Hong Kong Convention and Exhibition Centre, July 1, 2022. (PHOTO / HKSAR GOVERNMENT)

President Xi Jin-ping’s speech at the grand ceremony on July 1 marking the 25th anniversary of Hong Kong’s return to the motherland has drawn a warm and instantaneous response from a wide spectrum of the city’s community.

The president’s remarks have been hailed as a “milestone” and a “beacon” for the special administrative region’s future development and formulation of policies.

Key officials of the Liaison Office of the Central People’s Government in the Hong Kong Special Administrative Region met on Sunday to further study Xi's speech delivered at the ceremony which also saw the inauguration of the sixth-term government of the HKSAR.

The meeting followed a similar one held by the liaison office on Saturday that was also attended by local political and business leaders.

Hosted by Luo Huining, director of the liaison office, the office, in a statement after the meeting, said the internal meeting said that Xi’s speech has provided a profound exposition and comprehensive understanding of “one country, two systems”, and set the direction for Hong Kong's future development, calling it a “significant milestone” for the SAR.

Xi's speech, which bridges history, the present and the future, has opened up a new dimension in the principle of “one country, two systems”, the office said.

The statement said that in order to realize the president’s “four expectations”, the office will provide full support for HKSAR government in assuming the principal responsibility of governing the city, and widely engage patriotic forces in helping Hong Kong to achieve greater success and sharing the glory of the nation’s rejuvenation together with people in the rest of the country.

Xi’s “four expectations” are for Hong Kong to improve its governance;  continue to create a strong impetus for growth; earnestly address the people’s concerns and difficulties in livelihood; and for the city to work together in safeguarding harmony and stability.

In a post on social media after the meeting, Lee said his governing team will strive to accomplish Xi’s “four expectations”.

Lee also told secretaries and bureau heads to be independent, efficient and accountable, and work together in a programmatic and results-oriented manner to make Hong Kong a more promising, livable and open city.

Local media reports said a seminar for senior government officials to further study Xi’s speech will be held this week to help facilitate the formulation of policies.

Representatives of Hong Kong’s medical and healthcare sector also met on Sunday to study Xi's speech. The meeting was attended by more than 200 people from over 30 professional groups.

READ MORE: Xi has 'set the tone' for 'one country, two systems'

Executive Council member Ko Wing-man, who’s also a member of the National Committee of the Chinese People’s Political Consultative Conference, said in order to accurately and comprehensively understand “one country, two systems”, one has to understand that it’s conferred by the Constitution, and there’ll be no high degree of autonomy for Hong Kong if the central government’s overall jurisdiction over the city is not upheld.