By Cao Desheng and Zhang Yunbi in Beijing, Xu Weiwei and Jan Yumul in Hong Kong, and Sergio Held in Cajica, Colombia 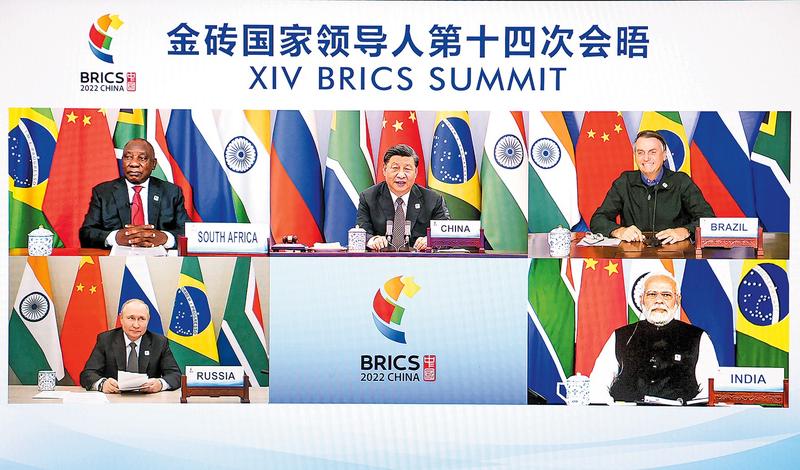 President Xi Jinping has urged the BRICS countries to support one another on issues concerning their core interests, practice true multilateralism, and work together to safeguard justice, fairness and solidarity and reject hegemony, bullying and division.

China stands ready to work with BRICS partners to add more substance to the Global Development Initiative, or GDI, which aims to re-energize the implementation of the United Nations’ 2030 Agenda for Sustainable Development, and contribute to stronger, greener and healthier global development, Xi told the 14th BRICS Summit on June 23.

Analysts hailed the remarks, saying the summit has set the stage for greater and more visible efforts by the BRICS members to support global cooperation and boost development and innovation.

High-quality collaboration among BRICS nations can help the world overcome the COVID-19 pandemic and other challenges, and make progress in regard to realizing the UN sustainable development goals, they said.

Swaran Singh, a professor of diplomacy and disarmament at Jawaharlal Nehru University in India, described Xi’s remarks at the BRICS summit as “subtle, broad-based, and philosophical”.

The significance of the 14th BRICS Summit lies in this being the most potent grouping of “emerging economies” that have been the locomotive of post-pandemic resilience in the global economy and healthcare relief, he said.

BRICS, the grouping made up of Brazil, Russia, India, China and South Africa, accounts for 42 percent of the global population and 25 percent of the world economic output.

Singh said the latest BRICS summit, which was hosted by China, reinforces the view that emerging economies should “work with China to reinforce their complementarities to democratize global economic decision-making and enhance global economic benefits”.

Dennis Munene, executive director of the China-Africa Center at the Africa Policy Institute, said the Chinese president’s insights inspired hope at a time when the global community is facing unprecedented challenges as a result of the pandemic.

Eduardo Klinger Pevida, director of the Center for Analysis and Studies on China and Asia and a member of the Academy of Sciences of the Dominican Republic, said “the force that holds (the BRICS) together is not ideology nor politics but the identification of shared interests, especially for development.”

This is particularly important now, as the “combination of the COVID-19

pandemic and the Ukraine crisis has resulted in disruptions to global industrial and supply chains, sustained hikes of commodity prices, and weaker international monetary and financial systems”, he said.

“We are at the beginning of a major shock, this time because of a major food crisis. Low- and middle-income countries in Africa and the Middle East will suffer from shortages and rising prices of fertilizers, grains, and other substitutes,” Fernando Castello-Sirvent, an economist and professor at the ESIC Business and Marketing School in Spain said.

The “perfect storm is approaching”, Castello-Sirvent said, adding that global value chains have begun to reconfigure.

Chairing the BRICS summit via video link from Beijing, Xi said the pandemic and the Ukraine crisis have caused disruptions to global industrial and supply chains, and led to a rise in commodity prices, among other things, making it important for BRICS to boost ties.

He called for enhancing international cooperation on the COVID-19 response, pooling strength for economic recovery, stepping up macro policy coordination and keeping industrial and supply chains secure and unclogged.

Underscoring the themes Xi highlighted, multiple undertakings have been launched under the BRICS cooperation framework this year, including the Initiative on Enhancing Cooperation on Supply Chains, the Initiative on Trade and Investment for Sustainable Development, and the Strategy on Food Security Cooperation, among others.

At the June 23 summit, Xi criticized some countries that seek to create monopolies and erect barriers in science and technology in order to disrupt others’ innovation and development, and said the attempts are doomed to fail.

Saying that the world today is overshadowed by the dark clouds of Cold War mentality and power politics and beset by constantly emerging traditional and nontraditional security threats, Xi called on the BRICS countries to uphold solidarity and safeguard world peace and tranquility.

“Some countries attempt to expand military alliances to seek absolute security, stoke bloc-based confrontation by coercing other countries into picking sides, and pursue unilateral dominance at the expense of others’ rights and interests. If such dangerous trends are allowed to continue, the world will witness even more turbulence and insecurity,” he said.

He underlined the need to reject Cold War mentality and bloc confrontation, and oppose unilateral sanctions and abuse of sanctions.

China is willing to work with BRICS partners to operationalize the Global Security Initiative, which advocates a vision of common, comprehensive, cooperative and sustainable security, and bring more stability and positive energy to the world, Xi said.

Deniz Istikbal, an economic researcher at the policy think tank Foundation for Political, Economic and Social Research in Turkey, said the 14th BRICS Summit marks an important threshold for the global economy.

“Unlike Western countries, cooperation between BRICS actors is increasing, and new international alternatives are created. This year’s summit is among the important indicators of this,” he said.

Glenn Wijaya, an adviser to the Center for Indonesia-China Studies, said the most important points from Xi include the emphasis on the need for BRICS to assist all developing countries in accelerating the development of the digital economy, green transformation, as well as cooperation in the response to COVID-19.

During his speech on June 23, Xi underlined the importance of developing the “BRICS Plus” cooperation approach, and called for advancing this process to allow like-minded partners to become part of the BRICS family at an early date.

The leaders exchanged views on BRICS cooperation in various fields as well as other major issues of common concern and reached broad consensus.

While agreeing to bolster cooperation in various areas, including the COVID-19 response, the leaders pledged to firmly uphold the multilateral trading system, advance the building of an open world economy and oppose unilateral sanctions and “long-arm jurisdiction”.

Addressing the summit, Bolsonaro voiced his hope that the BRICS nations will have a greater role in key international organizations as developing countries account for an increasing proportion of the global economy.

Bringing communities closer together is one of the priorities for the BRICS, the Brazilian president said, adding that he agrees with Xi that the way forward amid the many challenges facing the world is more cooperation.

Putin said that some countries currently follow erroneous economic policies, and they are making other countries pay the price for their mistakes. The BRICS nations need to bolster unity and make a greater joint effort to tackle difficulties, he said.

India’s Modi said the BRICS nations face similar challenges, and their stronger collaboration will make a key contribution to the world’s recovery from the pandemic.

Ramaphosa said the BRICS nations should seize the opportunity to boost collaboration. With China holding the BRICS chairmanship this year, the group has held its first high-level meeting on climate change and made global development more inclusive and sustainable, he noted.

The summit adopted a Beijing Declaration to gather the latest results of practical cooperation within the bloc and unveil plans for the next stage of BRICS cooperation.

“In order to promote the development of the BRICS cooperation mechanism, China has been true to its word and is productive in achieving good results,” said Chen Xulong, a professor of multilateral diplomacy and UN reform studies at the University of International Business and Economics’ School of International Relations.

State Councilor and Foreign Minister Wang Yi noted that “BRICS Plus” activities have engaged more than 50 non-BRICS countries, expanding the influence of the bloc.

Argentine President Alberto Fernandez, meanwhile, confirmed that he would like to see his nation become part of the emerging economies’ grouping.

“We are honored by the invitation to this expanded BRICS meeting. We aspire to become full members of this group of nations,” Fernandez said during a high-level dialogue on June 24 that involved the five BRICS nations as well as 13 other developing countries.

Apart from chairing the BRICS summit on June 23 and the dialogue event on June 24, Xi delivered a keynote speech at the BRICS Business Forum on June 22.

Liu Hongjie in Beijing contributed to this story.