HKO to consider issuing typhoon signal No 3 this evening 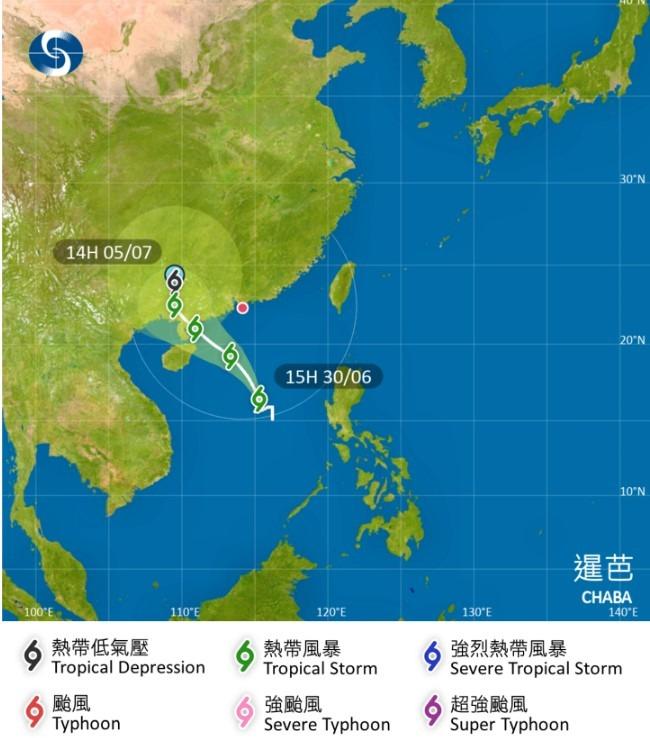 The observatory issued typhoon signal No 1 at 9:10 pm on Wednesday.

READ MORE: Observatory: Hong Kong's May much cooler than usual

"In the past few hours, Chaba gradually tracked north, and intensified slightly," the observatory said in a special cyclone warning bulletin issued at 2:45 am Thursday.

According to the present forecast track, Chaba continues to edge closer to the coast of western Guangdong. Local winds will strengthen gradually tonight.

"According to the present forecast track, Chaba continues to edge closer to the coast of western Guangdong. Local winds will strengthen gradually tonight. The observatory will consider issuing the Strong Wind Signal No 3 then," it added

Chaba, estimated to be about 660 kilometers south of Hong Kong at 3 pm Thursday, is forecast to move north-northwest at about 15 kilometers per hour in the general direction of the coast of western Guangdong, the HKO said.

“The outer rainbands associated with Chaba are already affecting the territory,” the bulletin reads.

Local winds will be strong offshore and on high ground later on Thursday and there will be swells, it added.

The HKO advised people to stay away from the shoreline, and not to engage in water sports.

On path to hit south China

The typhoon is heading toward the island province of Hainan in southern China, according to the provincial meteorological authorities.

It was observed on waters 300 km southeast of Yongxing Island in Hainan's Sansha City, packing winds up to 65 km per hour.

Meteorological authorities forecast that Chaba will move northward at a speed of 10 to 15 km per hour, with slowly increased intensity. It is expected to approach the coastal areas in Hainan and Guangdong provinces this weekend.

Some areas in Hainan, Guangdong and Fujian provinces and Guangxi Zhuang Autonomous Region will see heavy rainfalls and severe convective weather such as thunderstorms and strong winds.

Chaba will likely land in the western parts of Guangdong on July 3.

Guangdong province launched a Level-IV emergency response at 10 am Thursday for the approaching typhoon to minimize damage, according to the provincial flood control, drought relief and wind prevention headquarters. China has a four-tier weather warning system, with Level-I being the most severe.

*With inputs from Xinhua