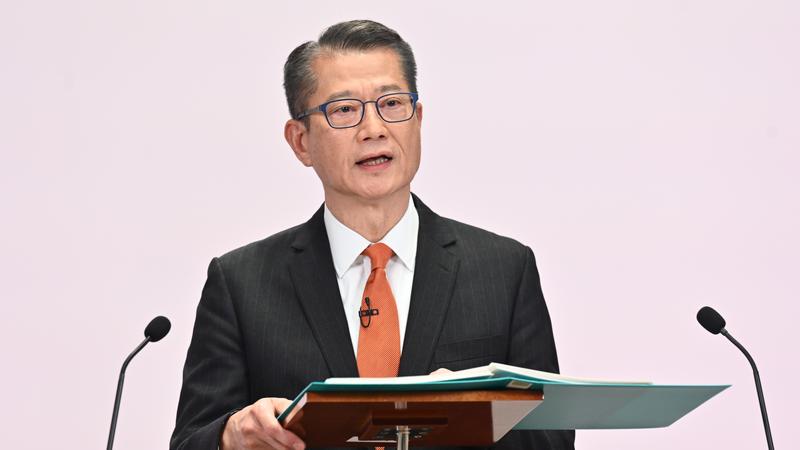 Hong Kong Financial Secretary Paul Chan Mo-po said he is very confident and hopeful about Hong Kong's economy and future development as the city is at a critical juncture of maintaining stability and seeking prosperity.

"Hong Kong now is in the best position to grow and focus our attention on economic development and also on improving people's livelihood," Chan said in an interview ahead of the 25th anniversary of Hong Kong's return to the motherland, which falls on July 1.

During the past 25 years, the city has achieved rapid development as an international financial center, which is mainly due to support from the central government and the unique advantages of the "one country, two systems" principle, he said.

Chan, 67, has served as financial secretary since 2017 and will stay on in this post for the incoming government of the Hong Kong Special Administrative Region, which will take its seat on Friday.

Hong Kong has grasped the historic opportunities presented by the mainland's reform and opening-up, while also forming good connections with international markets, he said. 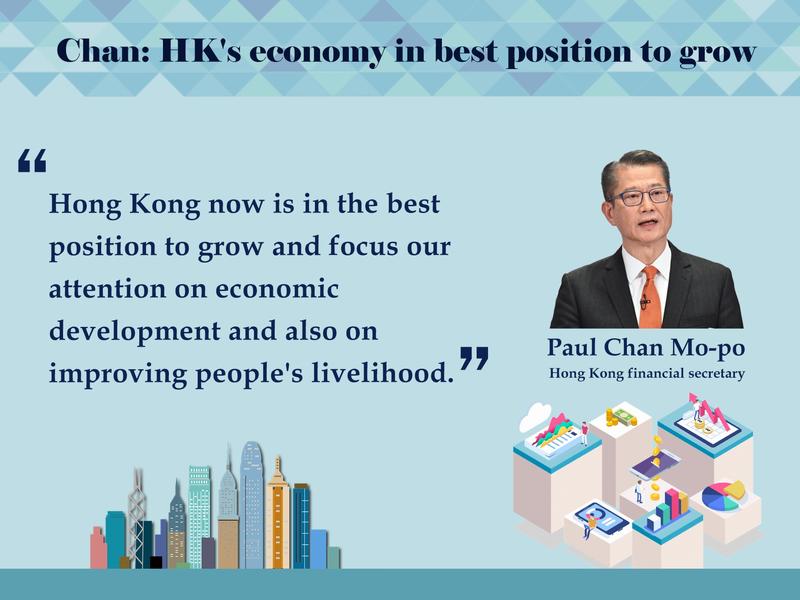 Looking back on the city's development over the past 25 years, he said the financial sector contributed less than 11 percent of Hong Kong's gross domestic product in 1997, and now the figure exceeds 23 percent.

The number of companies listed on the stock exchange rose from more than 600 to more than 2,500 during the period, and the value of the stock market jumped to over HK$40 trillion (US$5.1 trillion), from HK$3 trillion, he said.

However, the city has run into various challenges, including the Asian financial crisis in 1997 and the 2008 global financial crisis. The support from the central government has been the most important factor in overcoming those challenges, the finance chief said.

Hong Kong's total merchandise trade ranks sixth in the world, which is also mainly due to the mainland's rapid development as a large portion of the city's exports are re-exports of goods which originated from the mainland, he said.

Although the city has gone through some turbulence in the past several years, it quickly returned from chaos to stability after enactment of the National Security Law for Hong Kong, he said. The improvement to the electoral system has enabled Hong Kong to return to the right track of "one country, two systems" with patriots administering and serving Hong Kong, Chan said.

Refuting media reports of "capital fleeing Hong Kong", Chan said assets under management have risen to HK$34 trillion by the end of 2020, an increase of 21 percent year-on-year. 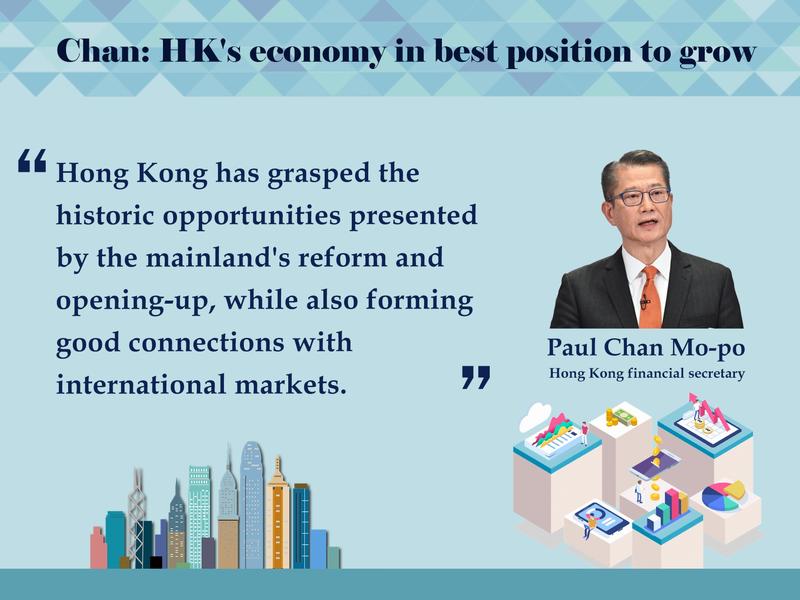 Total bank deposits reached more than HK$15 trillion by the end of last year, up from around HK$13 trillion in 2019. The Global Financial Centers Index rank Hong Kong No 3 in the world, just behind New York and London.

Chan said green and sustainable finance is the key for the whole country including Hong Kong, as it aims to have carbon dioxide emissions peak before 2030 and achieve carbon neutrality before 2060.Hong Kong also has a zero carbon emissions target before 2050.

"Going forward being an international financial center, I think we are very well positioned to guide international capital to match them with green projects," he said.

In the long term, for Hong Kong to achieve sustainable and good development, the city must further integrate itself into the overall national development of the mainland, he said.

The 14th Five-Year Plan (2021-25) has offered support for Hong Kong's development into an international innovation and technology hub and development in the sector can offer young people better employment opportunities.

"The government has invested HK$150 billion in the sector in the past five years, and we want to build a flourishing innovation and tech atmosphere from different means including further investment, attracting talent and infrastructure building," he added.