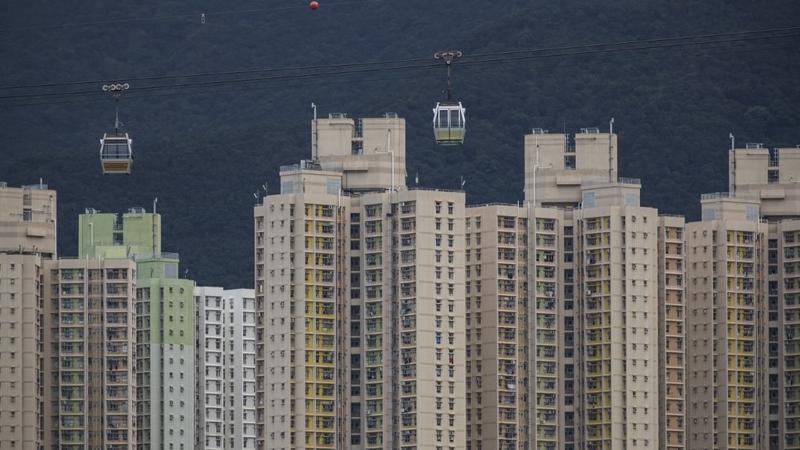 This photo shows a view of public housing in Hong Kong with cable cars traveling in the background, on Sept 20, 2020. (MAY JAMES / AFP)

Answering a query at the Legislative Council on Wednesday, Secretary for Development Michael Wong Wai-lun said the process currently takes at least six years but the government intends to implement measures to shorten it by around two to two and a half years.

According to Secretary for Transport and Housing Frank Chan Fan, 49,200 flats will become available from 2033 to 2027 under various subsidized home ownership programs

“We target to submit legislative amendments for these measures before the end of this year. If approved and implemented, (they) will be able to expedite various development projects in the pipeline,” Wong said.

The proposed measures include streamlining and shortening statutory procedures, avoiding repetitively executing similar procedures, and providing an express mandate for departments to run different procedures at the same time, like allowing reclamation to take place while formulating detailed land use plans.

Wong said the government also intends to rationalize relevant arrangements, like confining rezoning applications to those applicants with control over the land, and to streamline miscellaneous processes.

But researchers from Our Hong Kong Foundation estimated that only 277,400 public housing units could be completed during that period if land supply initiatives are not expedited.

They said coordination among departments should also be improved, noting that some housing projects took an average of 17 years from the official announcements to the moving in of the first batch of residents.

Also answering a question at the LegCo on Wednesday, Secretary for Transport and Housing Frank Chan Fan submitted a document showing that 49,200 flats will become available from 2022 to 2027 under various subsidized home ownership programs.

“The government has been sparing no efforts in identifying land for housing construction so as to address the housing needs of different sectors, including the youth,” he said.