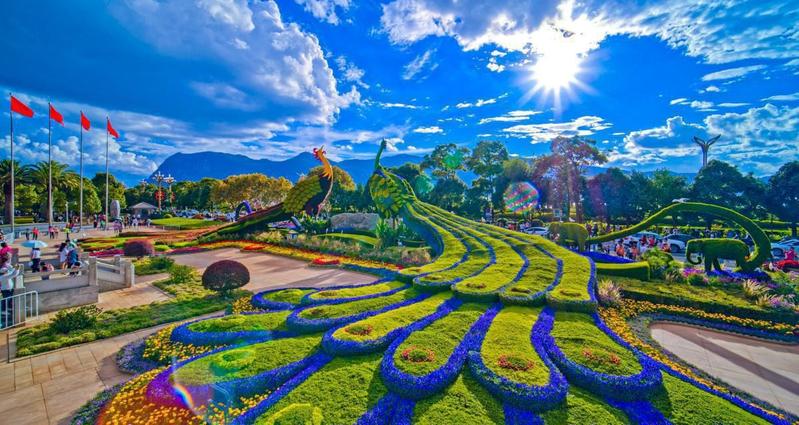 Kunming, Yunnan province, has been decorated with flower clusters, landscaping and lighting to welcome the opening of COP15 in October 2021. (HU YUNLONG AND XU JUN / CHINA DAILY)

The second phase of the United Nations' negotiations on the world's new biodiversity conservation goals through 2030, known as COP15, has been relocated from Kunming, Yunnan province, to the Canadian city of Montreal, between Dec 5 and 17, according to the Ministry of Ecology and Environment.

The decision was reached following consultation among the Chinese and Canadian governments and the secretariat of the UN Convention on Biological Diversity, a media release from the ministry said on Tuesday. The secretariat is based in Montreal.

With the COVID-19 pandemic control situations at home and abroad fully considered, the arrangement was made to "accelerate the global biodiversity conservation process", it said.

"China will continue to work as the presidency of the COP15," it said, adding that the theme of the gathering and its logo will remain unchanged.

The Chinese government has always attached great importance to biodiversity conservation, the statement said. With consistent efforts to play its role as the host of COP15, China, together with other parties, will endeavor to see an ambitious and realistic post-2020 global biodiversity framework reached at the meeting.

Dimitri de Boer, chief China representative of environmental law organization ClientEarth, said a lot of negotiations need to be carried out at the conference and the relocation helps address the uncertainties about the second phase of COP15. "This is very practical," he added.

As the largest UN biodiversity gathering in a decade, COP15 was originally scheduled to be held in Kunming, capital of Yunnan, in October 2020.

With the theme "Ecological Civilization: Building a Shared Future for All Life on Earth", it is tasked with elaborating on the post-2020 global biodiversity framework and identifying protection goals through 2030.

Ecological civilization is a concept promoted by President Xi Jinping for balanced and sustainable development featuring the harmonious coexistence of man and nature.

After being postponed to May 2021 due to the COVID-19 pandemic, it was rescheduled in August to be held in two phases, first in October 2021 and then in the first half of this year.

The first phase was successfully held in Kunming from Oct 11 to 15, which included the opening ceremony, leaders' speeches and the issuing of the Kunming Declaration. Overseas personnel attended the meeting online.

Via video link at the conference, Xi announced China's initiative to establish the Kunming Biodiversity Fund to support biodiversity protection in developing countries.

China took the lead in investing 1.5 billion yuan ($224 million), and called for contributions from other parties to the fund.