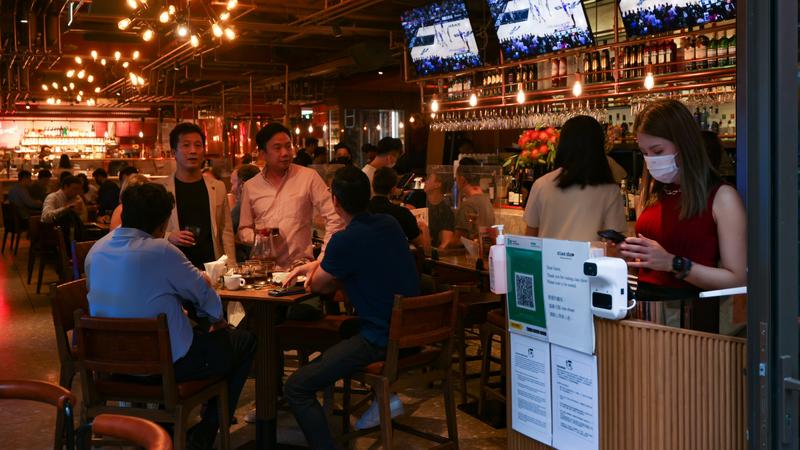 Secretary for Food and Health Sophia Chan Siu-chee said in a press briefing on Tuesday afternoon that law enforcement agencies have noticed that some bars and clubs have violated social distancing measures.

A new cluster was detected at a dance center in Wan Chai, with seven virus cases involving six students and one teacher, said Albert Au Ka-wing, principal medical and health officer of the Centre for Health Protection’s communicable disease branch

“This is a cause for concern…In the next 14 days, we will more or less extend current social distancing measures. However, we will impose an additional requirement on bars and pubs as well as clubs and nightclubs,” Chan said.

“Customers, before entering these premises, will have to show a negative RAT result done within 24 hours. Otherwise, they are not allowed to enter,” she added.

Chan said the new requirement will take effect Thursday and last until June 29. She noted that the number of new daily COVID-19 cases was going up and could reach four digits within the month.

“With this increasing trend, we think that within this month the number of cases may reach a four-digit figure,” Chan said.

“There is some form of rebound,” she said, adding that government did not want the spread of infections to “go wild”.

Director of Food and Environmental Hygiene Irene Young said at the same briefing that bar patrons should have a photo of their negative RAT test if they want to go to a club.

“They should show the date of the test and time on the photo,” Young said, adding that the Food and Environmental Hygiene Department has started prosecution procedures against 28 bars and pubs in Central, Western and Wan Chai districts for violations of social distancing measures.

Director of Health Ronald Lam said the government had noted six bar clusters with 350 cases, with the largest having a 22 percent infection rate.

“In these premises, the risk is pretty high. People have their masks off..If they’re not taking sufficient precaution, there is a risk of infection, causing second or third generation transmissions,” he said.

Albert Au Ka-wing, principal medical and health officer of the Centre for Health Protection’s communicable disease branch, said in the same briefing that there were 97 imported infections, 40 of which were detected at the airport.

A new cluster was also detected at a dance center in Wan Chai, with seven virus cases involving six students and one teacher, Au said.

He said the Racks City bar on Wyndham Street had one new infection while FLM bar in Sheung Wan had four more cases.

There was also one new death reported, involving a 79-year-old man, bringing the city’s death toll since the fifth wave of infections to 9,178, Au added.