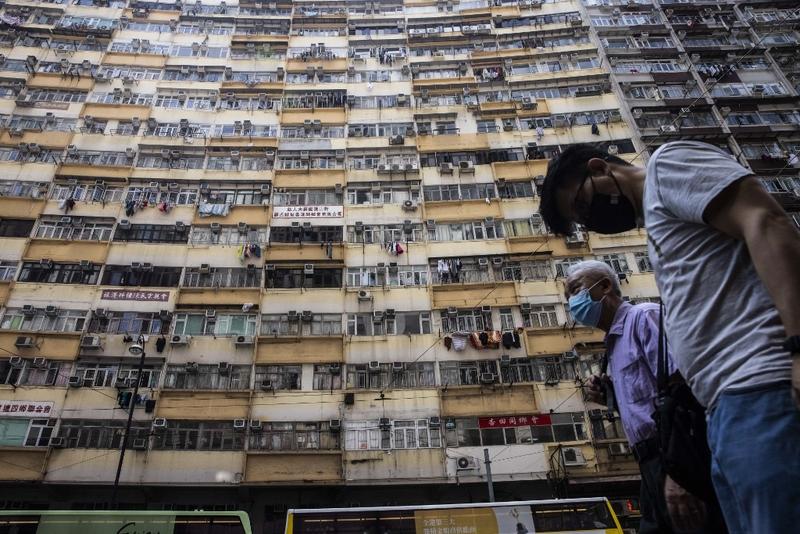 People walk past a residential apartment block in Hong Kong on May 20, 2022. (ISAAC LAWRENCE / AFP)

Albert Au, Principal Medical and Health Officer of the Communicable Disease Branch of the Centre for Health Protection, said at a press briefing that the new cases comprised 36 imported infections and 215 local cases, bringing the tally to 1,198,871.

The Centre for Health Protection was looking into four infections detected in the community that might involve “a new strain” or the Omicron BA.2.12.1 strain

He added that 111 infections were confirmed through nucleic acid testing and 140 by rapid antigen tests.

One classroom with morning and afternoon classes had seven cases, involving six students and one teacher, he said.

“So for this classroom, we believe there is an outbreak. We will conduct genome sequencing analysis to see (if the variant involved) is the same,” Au said.

He said two other classrooms on the same floor each had a student who was also infected with the virus. Au said that 13 students and seven teaching staff members from other schools also tested positive after they took the required virus test for those going to school.

He added that the McDonald’s cluster in Taikoo Shing had a new case involving a 99-year-old woman who lived in Richland Gardens.

“She did not go to McDonald’s but in the same building where she lived, there’s a lady who had been to McDonald’s,” Au said, adding that the cluster now involved 11 cases.

Au also said that the CHP was looking into four infections detected in the community that might involve “a new strain” or the Omicron BA.2.12.1 strain.

“We are concerned that these four cases may be a new strain. Preliminarily, we think they are local cases because they have no travel history,” he said.

Larry Lee Lap-yip, chief manager (Integrated Clinical Services) of the Hospital Authority, said at the briefing that a man and a woman, aged 67 and 87 years old and infected with COVID-19, passed away in the last 24 hours. Both were from residential care homes.

Meanwhile, the government reminded the public that the third stage of the Vaccine Pass will start on May 31.

It urged members of the public who are not yet compliant with Vaccine Pass requirements to get their required vaccine dosage.

During the third phase, residents should have received three jabs to continue using the Vaccine Pass.

Those who recovered from COVID 19 should get three or two shots within six months after their recovery. On the other hand, teenagers aged 12 to 17 should have received one dose of Comirnaty vaccine.

Other members of the public who are eligible to receive the third dose should get it as soon as possible, the government added.