By Yang Han in Hong Kong and Yifan Xu in Washington 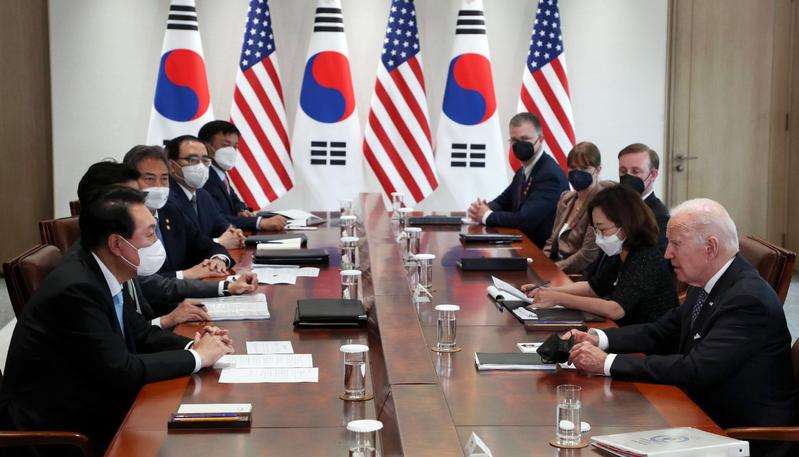 United States President Joe Biden sent shock waves on his first Asian trip by committing to "nuclear deterrence" for the Republic of Korea, wider military exercises and weapon upgrades in a region deemed the engine of global economic growth.

In a joint statement issued by Biden and Yoon Suk-yeol, president of the Republic of Korea, after their meeting on May 21, Biden reaffirmed that the US has extended a deterrence commitment to the ROK "using the full range of US defense capabilities, including nuclear, conventional, and missile defense capabilities".

"This is the first time that the joint statement stipulates the term 'nuclear deterrence'," said Lee Seong-Hyon, visiting scholar of Harvard University's Fairbank Center for Chinese Studies, noting that the inclusion of the term sends a clear message to the Democratic People's Republic of Korea.

"We, as the leaders of the two countries, reiterated our common goal of the complete denuclearization of the DPRK. There is no compromise for security. Under this shared belief, we concurred that strong deterrence against North Korea is paramount," Yoon said at a joint news conference after the summit.

Besides a nuclear umbrella, Yoon said that there could be many other aspects when it comes to extended deterrence.

His joint statement with Biden also noted the expansion of the scope and scale of combined military exercises and training in and around the Korean Peninsula.

Shawn Ho, associate research fellow at the S. Rajaratnam School of International Studies in Singapore's Nanyang Technological University, said he expects the DPRK to react very soon to the joint statement as they would see some of the moves as being targeted toward the DPRK.

"It is also expected that the DPRK will voice its concern or opposition to some of these intentions by the US and (the ROK)," Ho told China Daily. "Because from the DPRK's perspective, these military exercises between the US and (the ROK) …are not conducive to the peace and stability of the Korean Peninsula."

Biden and Yoon also agreed to reactivate at the earliest date the high-level Extended Deterrence Strategy and Consultation Group, a bilateral platform that was suspended in 2018.

Lee, from Harvard, also stressed that the ROK and the US have significantly expanded their military alliance to one that now also includes the economic security component.

The ROK and the US are "unified in common determination to deepen and broaden our political, economic, security, and people-to-people ties", according to the joint statement, indicating the sharing and cooperation of both in cyber and space security.

Biden arrived in Seoul on May 20 to begin his first visit to the ROK as president, just 10 days after Yoon's inauguration. The only "unconventional" aspect of Biden's ROK visit was its timing this early in the new ROK president's term, said Sourabh Gupta, a senior fellow at the Washington-based Institute for China-America Studies.