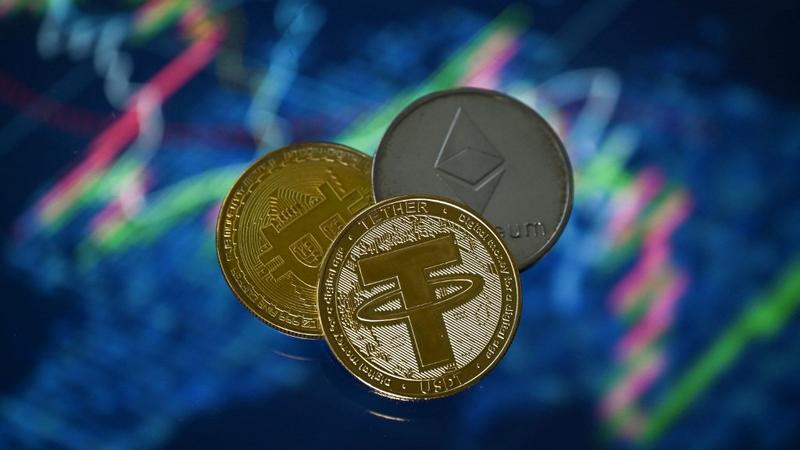 In this file photo taken on May 08, 2022 An illustration picture taken in London on May 8, 2022, shows gold plated souvenir cryptocurrency Tether, Bitcoin and Etherium coins arranged beside a screen displaying a trading chart. (JUSTIN TALLIS / AFP)

SEOUL - Reckoning they have little to lose with prices so ridiculously low, South Korean speculators in recent days have piled into Luna, a cryptocurrency that lost 99.99 percent of its value last week after its paired stablecoin TerraUSD collapsed.

Both tokens are affiliated with Terra, a blockchain platform co-founded by Korean developer Do Kwon and, according to blockchain analytics firm Elliptic, investors in them have lost around $42 billion.

Luna had been one of the world's most popular cryptocurrencies and its downfall, alongside TerraUSD, caused mayhem across the crypto spectrum globally, with bitcoin losing around a quarter of its value between May 9-12.

Worth nearly $100 in late April, Luna is now trading at a fraction of one cent - so low that there has been a rush of buying from speculators betting that it will stage a miraculous recovery, with some clinging to the belief that it is just too big to be allowed to fail.

"Luna was once a major coin of top-ten market capitalisation, so they will do whatever it takes to revive it," one hopeful investor wrote in a blog on South Korea's internet platform Naver, without saying who "they" could be.

As the sudden resurgence of buying crossed its radar, South Korea's Financial Services Commission warned people on Tuesday against investing in Luna.

The number of investors in the failed cryptocurrency rose more than 50 percent in just over two days at South Korea's major exchanges to stand at 280,000 as of May 15, according to a source at the FSC who, as is customary for South Korean bureaucrats, declined to be named.

The buying mostly came from domestic speculators, though there were some inflows from abroad, the source said.

The window for speculation is limited as Bithumb and Upbit, two of South Korea's largest exchanges, said they will suspend trading support for Luna on May 27 and May 20, respectively, while another, Coinone, has halted deposits in the crypto-currency ahead of a possible de-listing on May 25.

The buying has had little affect on the token's price. It has spent the past week flopping between one-hundredth and four-hundredths of a cent.

But the propensity of South Koreans, particularly the younger ones, to invest in volatile and risky assets from stocks to cryptocurrencies has worried regulators.

Their earlier enthusiasm had helped put Luna and TerraUSD among the world's ten largest cryptocurrencies ranked by market cap.

But things fell apart on May 10, when TerraUSD's 1:1 peg to the dollar was shattered. On Wednesday it traded at around 10 cents.

Unlike most other major stablecoins which are backed by other assets, TerraUSD's value is derived by complex algorithmic processes, linked to its paired token Luna, which is free floating.

Under the system, one TerraUSD token could be swapped for $1 of Luna, and vice versa, and once swapped the coins would be destroyed.

If TerraUSD fell below $1, traders were incentivised to buy the stablecoin to swap it for $1 worth of Luna, and so reduce the supply of TerraUSD's and push its price back to $1.

That was the theory, but the market proved the premise wrong.

As the market imploded, hundreds of outraged retail investors flooded social media with tales of woe, with some of them asking Kwon to compensate their losses.

Kwon, last week, announced plans to change the system so TerraUSD will backed by reserves in future, but it is unclear whether this plan is achievable.

There is little the government can do to protect investors as cryptocurrency trading takes place outside its regulatory sphere.